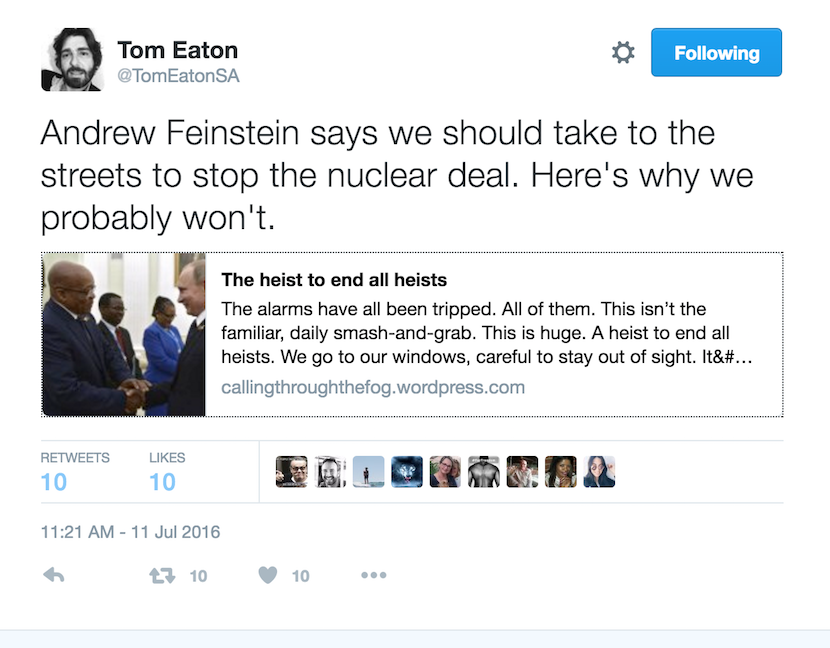 In what will go down as a Biznews Classic, Alec Hogg’s interview with former ANC parliamentarian Andrew Feinstein. It was a journey from his time as a politician, to investigator, to best selling author, which is currently being turned into a 90 minute documentary by Hollywood star Danny Glover. Feinstein says the movie is an attempt to warn South Africans that their country’s sovereignty is at risk. His interview was a call for all South Africans to take to the streets and put an end to the nuclear build, or they’ll end up paying billions of Rands. Tom Eaton says South Africans probably won’t. He pointed us to the direction of a blog post he wrote in 2015, which was first published in The Times and TimesLive – The Heist of all Heists. As Eaton says – the arms deal cost R30 billion and its foulness is still washing up everywhere, the trillion rand nuclear project will bury South Africa in a tsunami of filth so deep that we’ll forget what clean air smells like. A must read. – Stuart Lowman

The alarms have all been tripped. All of them. This isn’t the familiar, daily smash-and-grab. This is huge. A heist to end all heists.

We go to our windows, careful to stay out of sight. It’s still far away, but the first reports are already flickering like sparks from a bulldozed lamppost: they’re working on an international scale; the Russians are involved; they have earth-moving equipment and engineers. They’ve even got nuclear scientists. And they’ve hit the mother lode. It’s going to take decades for them to cart off all the cash.

We know what we’re seeing because we saw a proper heist once, back in 1999. This one’s much, much bigger, but our response is the same. We just stand at the window, twitching the curtain, angrily saying that someone should do something. Not us (because what can we do?) but someone, like the police or Thuli Madonsela or foreign investors or something.

They know we’re watching, but they don’t care. We’re just scenery to them now, a fleeting impression to be remembered one day when they’re lying on their private beach, laughing about the old days when they were making their pile. “Remember when you and me and Skippy took that side road, and there was that newspaper editor standing there going, ‘Stop, thief!’? I just saw an open mouth and a wagging finger. God! He looked so angry! ‘Stop, thief!’ Shame. I wonder what happened to that guy.”

Maybe once they feared us; feared that someone would be a hero or try to get in their way. But they needn’t have worried. In 1999 we shouted and pointed but we didn’t actually do anything. Even our angriest words were polite. An arms “deal”, our newspapers called it, as if something equitable had been arrived at. As if all that money had somehow bought something worthwhile. As if a heist could be a deal.

That’s when they learned that we’re just mannequins in our windows. We’ll shout things like “Pay back the money!” and “Consult us before you pay Russia to build six new nuclear power stations!”, but they know we don’t mean it. If we meant it we’d be massing outside their fences, shaking their gates, dragging them out in their pyjamas. Instead, we’re arguing over whether Danny Jordaan is a good choice for mayor. They can relax.

That’s the secret: relaxing. Waiting. Stretching out and letting the years tick past. That’s all they have to do to get away with it. And we’ve shown them how. We’ve taught them. All they need to do is grab the brass ring and then wait.

Even if they do the unthinkable and mortgage our future to the Kremlin, it’s going to work out for them. As the sun rises over the enormous crater in our national psyche, a trillion rand potentially signed over to one of the most corrupt countries on the planet, we’ll shout accusations and condemnations. Then there will be headlines. There might be a commission of inquiry, but even if it goes anywhere the result will just be more headlines. And then it will all go quiet, and they can begin the work of getting hot money to cool down.

The signs are encouraging. The takings from the last heist are coming along nicely. In 1999, they were called ugly things like “bribes”. Now, they’re property and educations. Left in the dark for almost 20 years, they’ve fermented into something that smells like respectability. And we’re okay with that. We don’t want to remember the origins of wealth. We love our fairy tales about beautiful people who got rich without ever getting filthy first.

No, they know they just have to wait. If you wait long enough, you never have to pay back the money. Endure five or six years of shouting from the mannequins, and you get to the keep the house and the fire pool. It’s yours forever, to hand down to your family, to create a dynasty. Some critics might remember you as a taker without a conscience. Who cares? Fuck them. In 50 years they’ll be dead and your family will be rich, celebrating your memory as a patriarch, a founder, a giver, a saint. All you have to do is wait.

The arms deal cost R30-billion. Its foulness is still washing up everywhere. If a trillion rand goes to Vladimir Putin’s personal fiefdom in return for our nuclear future, we will be buried in a tsunami of filth so deep that we’ll forget what clean air smells like.

It’s possible we’ll get six working power stations. It’s possible they will be safe. But whatever happens, the moment the deal goes through, we’re toast. We might end up with clean electricity, but the lights will have gone out on the possibility of good governance, and nothing will be clean again.