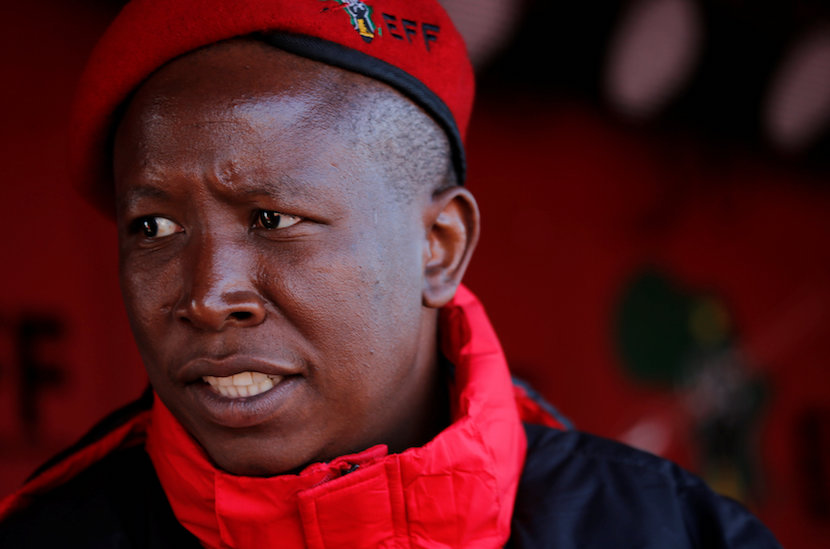 Julius Malema has finally put a popular conspiracy theory to bed once and for all – his EFF is prepared to side with what he calls “white racists” who control the DA rather than give a single vote to the ANC. While the EFF’s star was rising, rumours abounded that the ANC’s former Youth League head was actually building a Trojan Horse to shore up the ruling party’s control. After today’s announcement, that wild theory is well and truly in the dumpster. Malema’s entrepreneurial approach to public service is distasteful and his economic policies beyond wacky. But as a disruptive political force, Malema and his EFF have had a hugely positive influence on South Africa. Because of him, competitive politics has arrived in South Africa years ahead of schedule. – Alec Hogg

Since the African National Congress (ANC) lost its majority in major municipalities this month, in its worst electoral performance since it came to power nationally at the end of apartheid, the main parties have been attempting to assemble coalitions.

Malema, a fiery former ANC youth leader, said the EFF would vote with the DA at council meetings in order to deprive President Jacob Zuma’s ANC of municipalities that it has controlled since the end of white-minority rule 22 years ago.

With EFF votes, the DA is now likely to form minority administrations in Johannesburg; the neighbouring industrial region of Ekurhuleni that hosts the main airport; and Tshwane, which includes the capital Pretoria, Malema said.

He also said the EFF would assist the DA in the symbolically important Nelson Mandela Bay, which includes the manufacturing hub Port Elizabeth, although the DA said it could rule there without EFF help.

#Malema: we've heard South Africa n what they want. We'll move in that direction. There'll be no back door deals with ANC #EFFCoalitionTalks

Malema sought to stress that the EFF did not support the policies of the DA, which he described as a party of “white racists”.

“We are caught between two devils. The DA is a better devil than the ANC. We are not in bed with them,” he told reporters in the Alexandra township in Johannesburg.

“The ANC will not get a single vote from the EFF. We will vote for the opposition because the ANC must be removed from power.”

Malema said his party would work with the ANC only if it removed Zuma, made education free for all, and nationalised banks and mines, among other things — policies that it is highly unlikely to agree to.

The DA’s lead negotiator, James Selfe, said his party was confident the EFF would give it the support it needed to form minority governments.

He also said the DA would be able to form a coalition government in Nelson Mandela Bay and several other municipalities without the support of the EFF.

The EFF and DA both said after the Aug. 3 vote that they would not work with the ANC because their supporters had voted for change – but they are far apart in terms of policy, approach and experience.

Malema says EFF not desperate to be in power. We want to "earn it".

The DA is pro-business and has a largely white support base, while the EFF wants to redistribute land from whites to blacks without compensation and has been a disruptive political influence since it was formed three years ago.

Aubrey Matshiqi, a political analyst at the Helen Suzman Foundation, said it was not out of the question that political instability could trigger re-runs of some municipal elections in two years’ time.

The rand was marginally higher after weakening late on Tuesday.

Johannesburg – The DA has confirmed that it would remain “respectfully distant” from the EFF after large differences for now meant the two could not form coalition governments in Johannesburg and Tshwane.

Chair of the DA’s federal council James Selfe told Cape Talk on Wednesday, ahead of separate press conferences by the leaders of both parties on the matter, that “there are ideological differences that still persist between ourselves and the EFF”.

“We are committed to a longer-term conversation with them and we will have that conversation, but I think there are too many issues to get out of the way between now and the formation of a municipal government.”

He confirmed that the DA would work with the ACDP, the UDM, Cope and the FF Plus to form coalitions, but ruled out the ANC completely.

In Nelson Mandela Bay metro the DA has enough seats to form a majority government with the help of these parties alone.

He said in the councils with minority governments, things would be run on an “issue by issue basis”.

Selfe said things could get tricky when it came to passing budgets and integrated development plans for councils.

“I imagine a great deal of arm-wrestling would occur, but we are going to pursue goals that are similar, even though they may not be the same. So I think the budget and the IDP will be the area in which this type of government will either succeed or fail,” he said.

The mayor and speaker can be elected by a simple majority of voting councillors present, so forming the government is less tricky.

Selfe said: “It is likely we will have a minority government situation in both Johannesburg and Tshwane where we will be dependent on other parties for support on key votes and key issues.

“But I do think there is enough in common with the other parties with whom we have been negotiating separately to enable us to establish a stable and coherent government.”

Selfe said the EFF’s priorities did not necessarily speak to municipal issues.

“Their agenda is a very clear one, and they believe that land should be expropriated without compensation and that the mines should be nationalised and so on,” he said.

“These are not municipal competencies and our attitude all the way along is that we can talk about these matters and that they are actually peripheral to the running of the municipality,” he said.

“But I think there are some sticky issues that may have caused friction in a coalition government, and I think it is better that we remain respectfully distant from one another, yet achieving certain common aims.

“Our attitude all the way along is that we can talk about these matters, but they were actually peripheral to the running of a municipality.” – News24

There will be minority governments locally, whether led by the African National Congress or Democratic Alliance, according to Economic Freedom Fighters’ Commander-in-Chief Julius Malema in a press conference this morning. He made clear the EFF will not be joining forces with either major party, but instead will constitute the opposition in hung municipalities after the elections.

Which means the coming period, whatever that turns out to be, will test the professionalism and staying power of all South Africa’s political parties to the maximum. That at least is a useful break with the country’s local elections of the past.

Despite a few well published days in conference, the EFF had little choice. In spite of the media billing it as kingmakers, the EFF is not a democratic party so much as a loosely knit Marxist-Leninist or fascist grouping, the far left or right of the ANC, according to how people judge these things.

EFF list of demands for a coalition with ANC & DA – Zuma be removed, expropriation of land without compensation, nationalisation of banks…

After a mediocre election the party finds itself in limbo. It has alienated the ANC, the majority party and its president, but has nothing to offer a democratic opposition, the DA, except serious problems: its revolutionary programme that threatens to wreck government at the local level as it has threatened to do at national level, in routine disruptions of parliament that seem set to continue.

These are admittedly early days. But if the EFF is to become a tsunami the signs would be there now. The party apparently does not enjoy the confidence of voters; its manifesto can’t work except through coercion; it has no chance alone of demonstrating a sense of responsibility in government. The question going forward is how, and if, it can manage to hold together during a long period out in the cold.