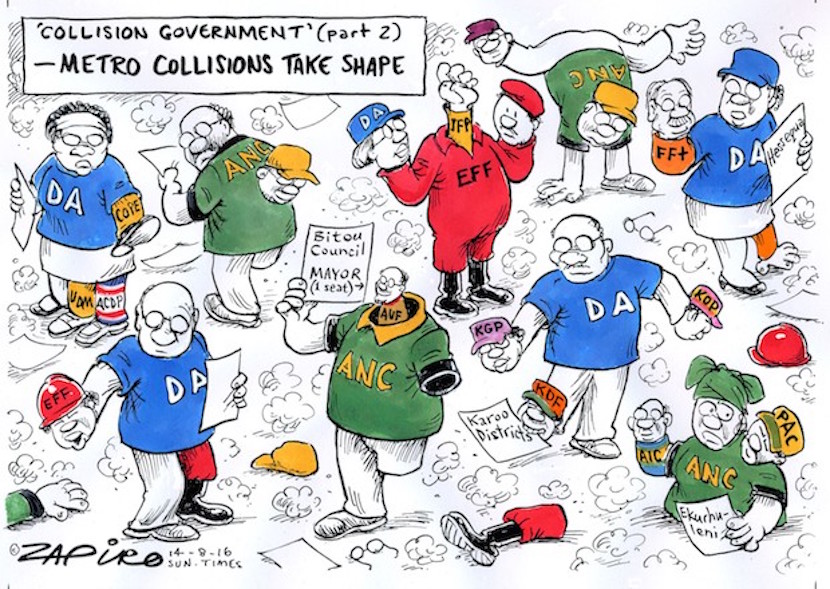 Ahead of the municipal elections, I asked former Finance Minister Trevor Manuel whether he would be voting for the ANC. He declined a direct answer. But did provide hope in a response which flies against prophets of doom predicting chaos after the opposition’s coalition honeymoon ends. Manuel argued that it was wrong for political parties to campaign with billboards featuring their leaders. In local government, elected representatives must be more concerned about serving their immediate constituency than those in party headquarters. That is a rational perspective. While MPs are often Parliament’s voting cattle forced to tow the party line, doing so at a local level is far more risky for politicians who are highly visible to their constituents. This is a system of government designed to bring out the best in these public representatives. Which should prevent them from acting irresponsibly. South Africa’s young democracy is about to put that theory to the test. – Alec Hogg

(Bloomberg) — Sporting a slimmed-down physique and a newly earned university degree, South Africa’s political provocateur Julius Malema has emerged as the kingmaker in several key cities where the ruling party has lost outright control. The result may be chaotic.

With neither the ruling African National Congress nor the main opposition Democratic Alliance winning a majority in 27 towns in Aug. 3 elections, Malema, 35, and his Economic Freedom Fighters may wield a veto over municipal budgets and appointments in centers like Johannesburg, the economic hub, and Pretoria, the capital.

“Whenever they have a budget, we will want to see it,” Malema, who formed the EFF three years ago after being expelled from the ruling party for insubordination, said with a chuckle at a Johannesburg press conference on Wednesday. “Show us specifics. Not good enough to say 500 million rand ($37 million) for housing. Show us where it will go.”

While the EFF decided to back DA mayoral candidates in hung councils to shut out the ANC, it plans to vote on other decisions on an ad hoc basis. Its past record doesn’t bode well for the new minority city administrations. Party lawmakers in parliament wear red miners’ helmets and overalls and routinely heckle President Jacob Zuma and his cabinet members, ignoring calls to order before being dragged out by security officials.

“Our public representatives spend all their time mocking each other,” said Sydney Mufamadi, director of the University of Johannesburg’s School of Leadership who served as South Africa’s local government minister for almost a decade. “If you can’t pass the budget and you can’t pass development plans, you don’t have an anchor for governance. ”

The political bickering started even before the new administrations are in place. The same day the EFF announced it would vote for the DA, Malema objected to the party’s choice of cosmetics entrepreneur, Herman Mashaba, as the mayoral candidate for Johannesburg. On Thursday, Malema reversed his position, saying in an interview with the Power FM radio station that the EFF would vote for Mashaba.

EFF comes out top in the coalition conversation AND tries to block the guy who invented a product called Black Like Me.

The municipalities oversee electricity and water distribution, some roads, parks, libraries and sanitation. Johannesburg, headquarters to the stock exchange and most of South Africa’s largest companies, and Pretoria, where dozens of diplomatic missions are based, have a combined budget of about 81 billion rand.

The rand has gained 5.1 percent against the dollar since the day of the election, the best performer of 16 major currencies tracked by Bloomberg.

“Minority government at municipal level inevitably injects additional uncertainty into key local decisions around policies, budgets and posts where there is no permanent majority to take long-term decisions,” he said by e-mail. “Stability will require compromise.”

Read also: Pressly: Coalitions – the new political pickle. But who holds the joker?

The EFF’s policies are far apart from those of the DA, which favors making it easier for companies to do business. Uniting them has been their opposition to Zuma, who the nation’s top court found had violated the constitution by refusing to pay back taxpayer money spent on upgrading his private home.

Besides the nationalization of mines and banks, the EFF also advocates the expropriation of white-owned land without compensation and more free services for the poor — policies that have found resonance with the 27 percent of South Africans that are unemployed.

Malema, who graduated with a degree in political leadership in March and has slimmed down by cutting out alcohol and hitting the gym, has been the main driving force behind the party. The EFF won 8.2 percent of the vote on Aug. 3, up from 6.3 percent in 2014 national elections.

Solly Msimanga, the DA’s mayoral candidate for Tshwane municipality, which includes Pretoria, said he’s confident he can work with the EFF. The council meets on Friday to vote in the new mayor.

EFF list of demands for a coalition with ANC & DA – Zuma be removed, expropriation of land without compensation, nationalisation of banks…

“We share very common goals to make life better for Tshwane’s people and that will keep us working together,” he said by phone on Thursday. “Delivery and stable government will come first, so any disagreements will be solved immediately. If needs be, I will negotiate with them to support the DA-led government on important votes.”

Jabu Mabuza, the chairman of Telkom SA SOC Ltd. and president of lobby group Business Unity South Africa, said he doesn’t expect the management of the municipalities to be easy.

“It is going to be difficult marriage, like all marriages of convenience,” he said in an interview in Johannesburg. “You are going to see robustness, very hectic debates. I just hope it does not lead to stalemates.”