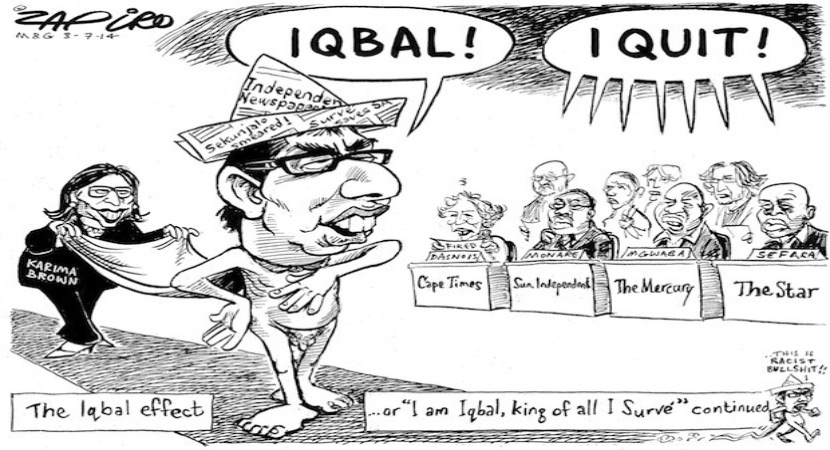 “The torch of crusading journalism carried by so many from Thomas Pringle to Percy Qoboza, Donald Woods, Max du Preez and Martin Welz, among others, has been dropped, with a few honourable exceptions, by the English press and picked up by Afrikaans newspapers.”

We are indebted to the tenacity of Democratic Alliance MP David Maynier and the honesty and integrity of our Deputy Minister of Finance, Mcebisi Jonas. They forced the CEO of the Public Investment Corporation, Dr Daniel Matjila, to concede in May that there had been a political rather than an investment motive in the PIC’s decision to provide most of the funding which allowed Dr Iqbal Survé to acquire Independent News Media Pty Ltd, the largest group of English newspapers in the country.

Matjila said the goal had been to give black people a chance to create a second Naspers.

A singular criterion in determining the success of such a venture is investigative journalism – in short, how have the Indy titles compared with the Naspers newspapers in this regard since the Sekunjalo takeover three years ago?

In my subjective assessment the two outstanding examples of investigative journalism in the past year or so have been the role of Beeld’s Erika Gibson in breaking the story about the way in which the African National Congress corruptly and illegally facilitated the escape of Sudanese president Omar al- Bashir and how our courts were lied to in this regard and Rapport and Beeld’s exposure of pervasive corruption in the Passenger Rail Agency of South Africa (Prasa).

After Janet Heard, head of the News 24’s parliamentary bureau, wrote about Gibson’s exclusive, I asked Gibson to give her own account of what happened in the al-Bashir escape saga and her response was subsequently posted on the Media Online website. This was investigative journalism at its best.

It would not be fair to say that on the Prasa story Pieter-Louis Myburgh (Rapport and, subsequently News 24) and Leanne George (Beeld) blew the Indy papers out of the water because the Independent titles were never in the water anyhow.

Eviscerated of its finest talents by a vengeful purge, Dr Survé’s newspapers were at best listless hangers-on in covering this saga of corruption and mismanagement, doing damage control by occasionally publishing retrospective follow-up articles.

Here is how Anton Harber described Myburgh’s entry for the 10th Taco Kuiper Award for Investigative Journalism for 2015 – which Myburgh won:

I have prepared the following timeline to showcase not only the talents of these fine reporters and their newspapers but the extent to which pervasive corruption has been allowed to flourish on the watch of the ANC.

Here is how Anton Harber summed up the submission by Beeld’s Leanne George:

This is a story of hubris. Following from the previous Prasa story, Leanne George heard CEO Lucky Montana describe his head of engineering Daniel Mtimkulu as a “genius”. With admirable journalistic scepticism, she checked out his genius, only to find that he was not registered as an engineer and his claimed double-doctorate – including the one he claimed to have got when he was 15 – was a figment of his imagination. And this is not the quality one wants from someone who has to oversee a R600-m train carriage purchase. He lost his job, as did another fake doctor in Prasa and, eventually, the CEO himself.

Responding to her enquiry, the Vaal University of Technology revealed that although Mtimkulu had registered there for a diploma in mechanical engineering, he had never completed the course!

In fact, two years after Dr Iqbal Survé took over the Independent titles – which include the Cape Times, the Cape Argus, the Mercury, Pretoria News, the Daily News, The Star, the Sunday Tribune, the Sunday Independent, the Diamond Fields Advertiser and Isolezwe – and started his purge of some of the country’s best editors, journalists and subeditors, not one of his newspapers made the 2015 finalist list for the Taco Kuiper award.

In 2014 the Taco Kuiper award for investigative journalism also did not go to a newspaper owned by Dr Survé. It went to Sam Sole, Stefaans Brümmer, and Vinayak Bhardwaj of the Mail & Guardian’s amaBhungane team for ‘The Nkandla Files’ and an Indy newspaper did not even make the shortlist of six entries.

This indicates that Dr Dan Matjila’s goal of establishing a black Naspers was nothing but an ill-considered pipe dream which holds little comfort for the country’s civil servants whose pension fund financed this project.

The recent resignation of Karima Brown and the impending retrenchments – staff will learn whether they are still employed when they get their payslips on Thursday – must make fear the pervasive emotion in the Indy newsrooms and that is hardly the incentive needed for producing world-class investigative journalism.

Given the PIC investment of hundreds of millions of rands to create a “black Naspers” it is interesting to reflect on the latest sales figures for daily newspapers published on Herman Manson’s Mark Lives website.

In the table for daily newspaper sales which Manson provides only one newspaper is highlighted in green which signifies an increase in sales and that is the Pretoria News, a newspaper owned by Dr Survé, which saw a radical improvement in the numbers of newspapers sold each day – 23 copies. If you subtract the 3606 which are effectively given away to schools and left at airports, then the number of people who actually buy the newspaper with their own money drops to little more than ten thousand.

Does that figure justify, after three years, an investment of more than a billion rand on behalf of the civil servants who expect a reasonable but safe return on their pensions by the people who are charged with that responsibility?

Does it justify the dearth of investigative reporting in the Indy newspapers if you use the Taco Kuiper awards as a determinant?

This was not a first. Snuki Zikala helped bankrupt the SABC with his equally ill-considered fantasy of establishing the “African Al Jazeera”. Hundreds of millions of rands were spent setting up 13 news bureaux in cities all over the world to produce news programmes which could be accessed by 0.5 % of South African households because the necessary decoder was not available locally – a brilliant business plan!

Thank goodness for the Afrikaans press.