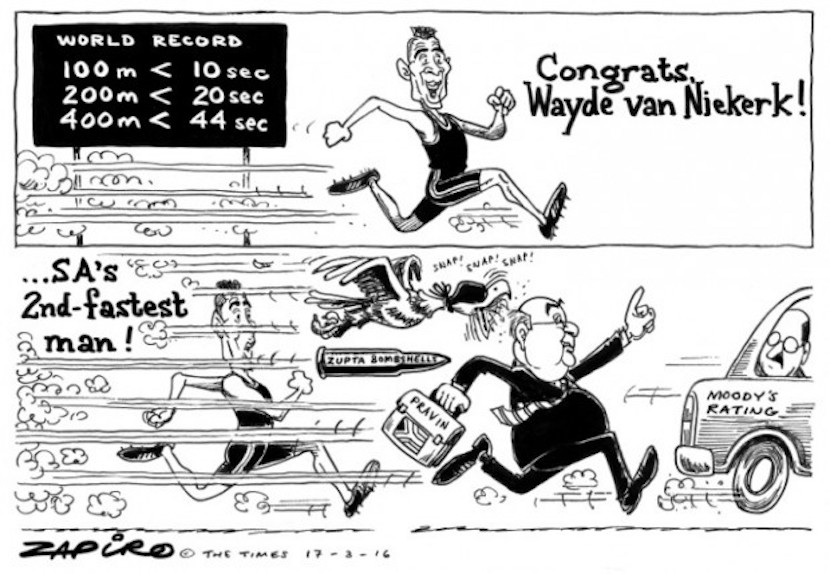 South Africa is once more on the brink of Nenegate Two after President Jacob Zuma’s fiercely loyal arm of the police service, the Hawks, demanded the country’s respected Minister of Finance Pravin Gordhan present himself tomorrow morning. They intend going through the final step in the process that must be followed before being formally able to arrest the 66 year old market favourite on trumped-up criminal charges. Former Finance Minister Trevor Manuel says arresting Gordhan will do more damage than Nenegate, indeed, he says it has the capacity to “destroy the economy.” SA Business Leadership has issued a powerful statement warning that the country is once more being taken to “the brink of the abyss”. It is a re-run of the movie the country saw in December on the day National Treasury insiders still refer to as 9/12. Once again Zuma is putting his own interests ahead of his nation’s. South Africa deserves better. – Alec Hogg

JOHANNESBURG, Aug 24 (Reuters) – South African assets slumped further on Wednesday after Finance Minister Pravin Gordhan said he would not appear before police who had requested him to meet them over an investigation into a suspected rogue spy unit in the tax service.

The police had on Monday asked Gordhan and other top officials at the South African Revenue Service (SARS) to meet an officer of the elite unit Hawks on Thursday in relation to contravention of surveillance regulations.

News of Gordhan’s summons compounded investors’ worries of a leadership wrangle over the Finance Ministry as Africa’s most industrialised country teeters near a recession and credit rating agencies consider downgrading it to “junk” by year-end.

Analysts speculated that there was a plot to remove Gordhan, and his decision not to meet the police as requested appeared to set the stage for what could likely be a prolonged tussle that could rock markets further.

Political pundits have said since February, when he was first asked questions by the Hawks about the unit he set up while at SARS, that Gordhan is a target of political pressure from a faction allied to President Jacob Zuma. The president’s office said in May that Zuma was not warring with Gordhan.

Zuma’s office has not commented on the latest developments.

The rand extended its losses, falling 1.5 percent to 14.21 against the dollar, extending its losses to almost 5 percent since the news about Gordhan became public late on Tuesday. Bonds also tumbled.

Gordhan said he had been advised by his lawyers that he was under no legal obligation to present himself to the police, and that the head of the Hawks had in the past told him that he was not a suspect in the investigations.

He said that he had already provided a comprehensive statement on the issue to the police and reiterated that the investigative unit set up while he was head of SARS was lawful.

“I am advised by my legal team that the assertions of law made by the Hawks in their letter of 21 August 2016 are wholly unfounded on any version of the facts,” he said in a statement.

“I therefore, do not intend to present myself,” he said.

“I have a job to do in a difficult economic environment and serve South Africa as best I can. Let me do my job.”

Hawks spokesman Hangwani Mulaudzi said he could not comment on what the next move by the police could be.

NKC political analyst Gary van Staden said Gordhan’s refusal to meet the police showed that he had reached his limit.

Investors and rating agencies back Gordhan’s plans to rein in government spending in an economy forecast by the central bank to grow at zero percent this year.

Analysts are worried that a replacement could likely be coerced to abandon such plans, destabilising an economy hammered by falling prices for commodities that range from coal to gold.

“Such action (removing Gordhan) will destroy this economy,” Manuel told eNCA television. “The next move is actually up to the head of state to call them (Hawks) in and say: if you have compelling evidence let’s see what it is.”

A Zuma-backed plan to build a fleet of nuclear power plants, at a cost of as much as $60 billion, has been a cause of tension with the Treasury for months and is likely adding to pressure on Gordhan’s position, analysts say.

Russian state-backed companies are the favourites to win the nuclear bid, industry sources say. Nene’s refusal to sign-off on the nuclear deal led to his downfall, government sources said at the time.

Gordhan has refused to be drawn publicly on whether he supports the nuclear project but has said South Africa will only enter agreements it can afford.

“This is all part of a plot to oust Gordhan,” political analyst Prince Mashele said. “Gordhan refuses to sign-off on the Russian nuclear deal.”

I confirm that on 22 August 2016, my attorneys received a letter from the Directorate for Priority Crime Investigations (“the HAWKS”) requesting that I present myself at their offices on 25 August 2016, at 14h00 in order that a warning statement may be obtained from me. The letter from the HAWKS is below.

I have since taken legal counsel and my response through my attorneys to the letter by the HAWKS together with my statement are attached. I am advised that I am under no legal obligation to present myself to the HAWKS as directed in their letter. I have decided not to do so for the following considerations:

I therefore, do not intend to present myself for a warning statement for many considerations, both legal and given my other commitments. I remain committed to assist the HAWKS in any bonafide investigation as stated in my statement.

I have a job to do in a difficult economic environment and serve South Africa as best I can. Let me do my job.