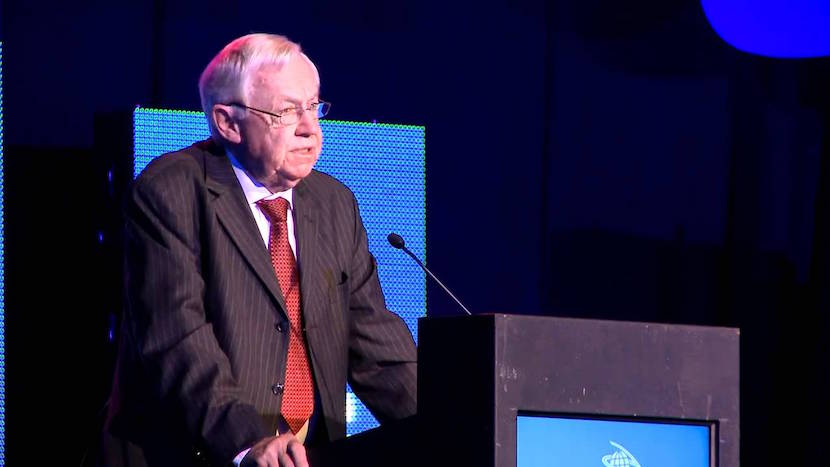 A sick joke did the social media rounds yesterday when many of us picked up on a website which published that Archbishop Desmond Tutu had died. Ironically, another South African hero DID pass away yesterday. Allister Sparks, the great liberal thinker, gifted writer and deeply committed newsman, was 83. Like the Arch, he had been hospitalised for the past week or so. Unlike Tutu, he never made it home.

Sparks was as big as they come, his most productive years spent fighting the Apartheid Government in the late 1970s and early 1980s while editing the Rand Daily Mail. Sparks won the International Editor of the Year Award for encouraging and guiding RDM investigative superstar Mervyn Rees’s expose’ of the “Info Scandal”.

There is a personal angle here. Sparks hired my 21 year old self into his great newspaper in late-1980. For years I kept Allister’s hand written note of congratulations that accompanied an unexpected increase to my meagre salary. Taking the trouble to personally engage with a greenhorn was typical of this iconic newspaperman whose feet never left the ground.

During a period when most of SA business and much of the media were pally with the Apartheid regime, Sparks never wavered from his liberation agenda. He was often the only obstacle standing between a critical SA Associated Newspapers directorate and RDM newsroom stars like Helen Zille, Zwelakhe Sisulu and Ameen Akhalwaya. Sparks courageously produced a newspaper which in SA’s darkest days offered hope to the otherwise hopeless. His memory deserves every plaudit sure to come its way.

I remember those days well. I also trained at the RDM and was put into the Consumer Mail (death of a young journo) with Vita Palestrant, Penny Gordon, Hamish Fraser’s wife, etc. Of course in those days it was an illuminating little section of the newspaper and the scams that we uncovered (with me as the rookie) rocked.

However my young heart was set on being more than that, and my interaction with Anthony Holiday, who later went to prison, with Adam Klein, who took his fair share of rough treatment before retreating to the US, Lucy Mvebelo – Garment Workers Union, and so on, are carved in my heart.

RIP Allister Sparks, a leader in a world where things were very black and white, and, who dared to cross the line, as did other courageous South Africans of that time who saw wrong, and sought to make it right. Shine on you crazy diamond…

History is weird. The world wouldn't have known what really happened to SteveBiko had #AllisterSparks not sent @helenzille to find out. #RIP

President Jacob Zuma has extended his deepest condolences on the passing of well-known veteran journalist, Mr Allister Sparks, who passed away on Monday after an illness.

Mr Sparks was an experienced journalist, author and political commentator. He developed and trained many journalists, especially during his tenure as an editor.

He was the editor of The Rand Daily Mail during the period of apartheid oppression, and the publication made its mark by exposing the evils of the system.

Mr. Sparks continued to contribute columns even after retirement.

“He made his mark in the fight for a free South Africa and proved that the pen is mightier than the sword. We extend our deepest condolences to his family”, said President Zuma.