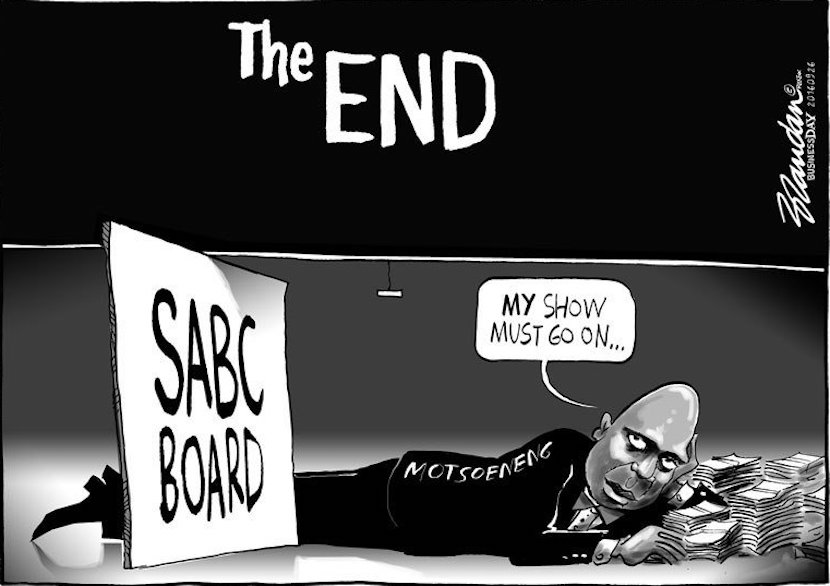 “I doubt very much whether a board of a bank would countenance the appointment of a deputy bank manager for the Kroonstad branch so dense a cloud was there hanging over the head of the candidate, unless the appointment process was accompanied by a further, precise inquiry into the exact nature of all of the adverse findings made against the candidate for the position.” – Judge Dennis Davis, Cape High Court 27/11/2015

“We read Judge Davies judgment and that judgment … stated categorically that Mr Motsoeneng can hold any position here at SABC if requirements are met and due processes are followed.” – SABC’s chairman, Prof Mbulaheni Maguvhe 27/9/2016

In announcing the SABC’s latest tactic to show its contempt for the Public Protector and the courts, the SABC’s chairman, Prof Mbulaheni Maguvhe, quoted very selectively yesterday from the ruling in the Cape High Court by Judge Dennis Davies on 27 November last year. He was announcing that Hlaudi Motsoeneng had, without due process been appointed to a senior position at the SABC – to the distress of the Public Protector who was, once again, slandered by Motsoeneng.

Then, without a trace of shame, Maguvhe asserted that an SABC disciplinary hearing had found Hlaudi Motsoeneng innocent of any wrongdoing when, in fact, it was a cynically manipulated process that had no credibility at all.

After this SABC media conference, Public Protector Thuli Madonsela said that if due process had not been followed it would not only be disrespectful of her office but of our courts and those responsible would be held personally liable for court costs.

The jury is not out in this regard – it has already delivered its verdict.

Hannes du Buisson, president of the Broadcasting, Electronic, Media & Allied Workers Union (BEMAWU) has placed online his union’s view that the position was not advertised and was “irrational and unlawful”.

In any normal, merit-based democracy you are dismissed if you bring your employer and the organisation you work for into disrepute.

When it comes to bringing your employer into disrepute and in creating adverse headlines for all the wrong reasons, let’s use 25 September as a Hlaudi Motsoeneng/SABC case study in this regard.

Thuli Madonsela said her office would not hesitate to sue #SABC board & minister Faith Muthambi, should #Hlaudi be re-appointed COO 👏👏👏

25 September 2016 – The ANC says the SABC must act in line with a commitment President Jacob Zuma made to the judiciary that government departments and state institutions would not ignore court rulings.

25 September 2016 – The ANCYL says Hlaudi Motsoeneng must keep his job.

25 September 2016 – The SABC acknowledges that it does not know what Hlaudi Motsoeneng’s job title is.

25 September 2016 – Criticism is starting to surface about the SABC’s coverage of the Paralympics.

To put this into perspective you have to listen to this technically unprofessional 2014 SABC interview with a former SABC board chairperson, Ellen Tshabalala, reputedly a very, very close friend of President Jacob Zuma. She left the SABC after a prolonged court struggle at your cost and mine having been accused of nefarious practices. She is now involved in a quixotic search for the villainous canine that ate her homework. Motsoeneng praised her at yesterday’s media conference.

In the interview, where her voice is only just audible and it looks as though it was shot during a prolonged earth tremor because no tripod was used, she asserts, absurdly as the record shows, that Motsoeneng “brings stability” to the SABC, a viewpoint that she shares with Communications Minister, Faith Muthambi.

Tomorrow the SABC’s acting CEO, James Aguma, will appear in parliament to answer questions about the state broadcaster’s parlous financial situation and the current snafu status quo. At the end of this truly frightening Motsoeneng interview which tells you everything you need to know about the Zuma faction and media capture, he refuses point blank to respond to a question about the hugely controversial multi-million rand bonus which he has received for selling the family silver to Multichoice.

Aguma can enlighten and edify us in this regard tomorrow.

Among the questions that need to be answered are these four:

In the mid-1990s the SABC had a Camelot period when it was truly a public broadcaster, what the late Allister Sparks described as its “Prague Spring”. That was when people like the late Zwelakhe Sisulu and Barney Mthombothi were in charge. Then President Thabo Mbeki transformed it into a bankrupt circus devoid of news credibility by sending in his fawning acolytes – Christine Qunta, Snuki Zikalala, Thami Mazwai, Dali Mpofu et al. The circus no longer amuses and a more apt and topical description is Tom Eaton’s “great sucking cesspit of despair.”

The Democratic Alliance has justifiably called for “parliamentary inquiry into the complete chaos at the SABC.”

That is not going to happen – Aloota must Continua.

Some of the best examples of Naspers journalism are not translated into English for its News 24 website so I have done so with this 24 September article in which Dawie, political columnist for Die Burger, comes up with an intriguing hypothesis – that the man who allegedly marinates his eyeballs in neat Johnny Walker Blue to protect them from the searing reflections of his phosphorescent purple suits – is not doing it for Number One, but for himself!

‘You cannot decide Hlaudi Motsoeneng’s future – Hlaudi will decide his own future.’

These are the words uttered by Hlaudi Motsoeneng himself, the Hlaudi whose appointment as SABC head of operations was found to be irrational and illegal by the High Court and, yesterday, by the Appeal Court. Yesterday he hijacked the kwaito singer Mandoza’s funeral in Soweto to give the courts and his other enemies an earful.

Hlaudi speaking about Hlaudi in the third person. Hlaudi needs to know that Hlaudi is delusional.

Firstly, it is in quite bad taste (even if you do wear purple suits) to abuse someone’s funeral in this narcissistic manner. Secondly, Dawie has noticed that Hlaudi has a new arrow in his oratorical quiver and is now referring to himself in the third person. In so doing he has joined other well-known and infamous people who also referred to themselves in this way:

After the court ruling this week, Hlaudi reported to the SABC as an ‘ordinary worker’ (one would think in the first person).

He must have been terribly hurt by this according to his outraged tirade at the funeral. But obviously not hurt enough to give up the hope of soon securing another senior position at the SABC.

Hopefully this can be avoided since, even in the ANC, the tide is busy turning against him. However, this is where the good news ends, because the tide in the ANC is not turning against Hlaudi because he lied about his qualifications or caused major destruction at the public broadcaster.

The chaos at the SABC has its origins quite some time back. Behind the many SABC boards, various ministers of communication and a line of ANC portfolio committee chairmen lies a scrapyard full of operational losses, management crises, chronic mismanagement and a long history of how the public broadcaster has been failing its public mandate in order to oblige the governing party.

However, the project of being the ANC’s mouthpiece started veering badly off course when factions in the governing party multiplied, with this infighting also spreading to the SABC and its board. Which of course begs the question – whose mouthpiece exactly should an aspiring apparatchik be? It was under these circumstances that Motsoeneng was brought before the ANC’s national conference in Mangaung – to be tasked with using the broadcaster to the benefit of the Zuma clique.

And the more the foothold of the Zuma clique began caving away and the cloak of protection around Hlaudi started unravelling, the more our one-eyed king followed the example of his one political master: Cling for dear life, until the very last.