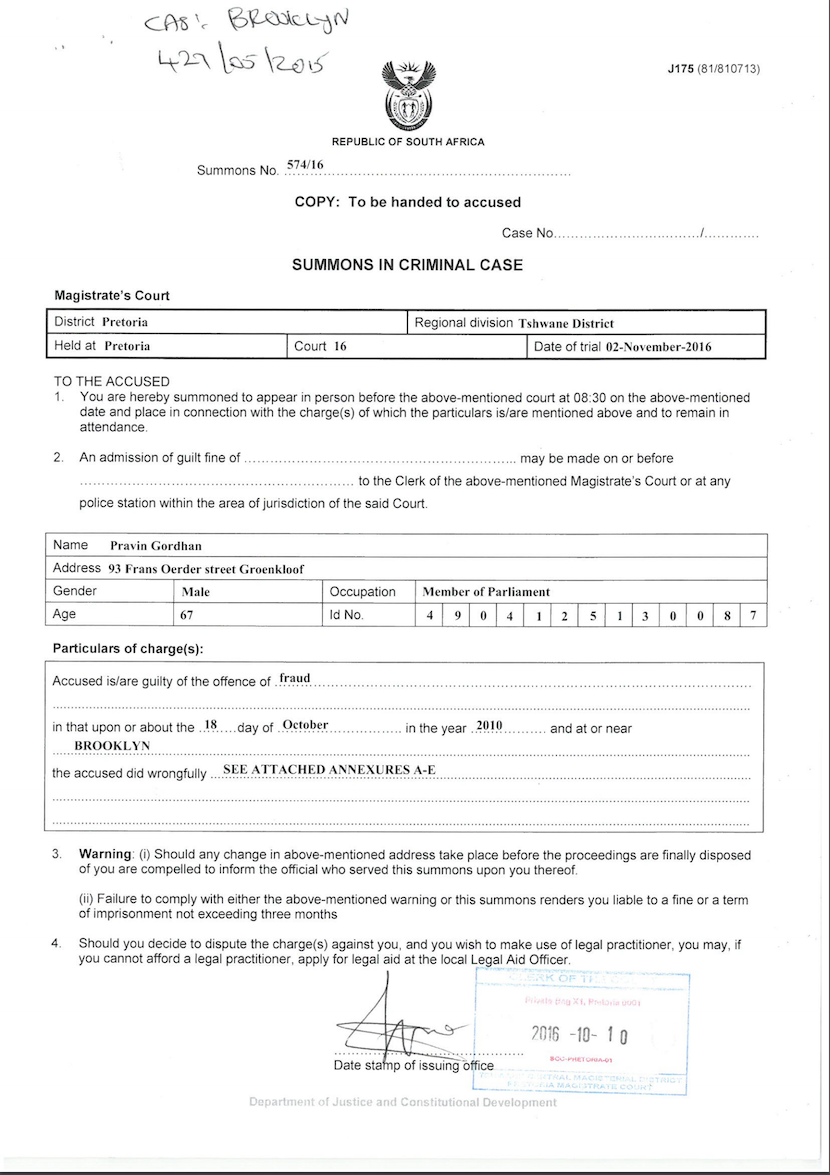 At last it’s now out in the public arena. The supposedly heinous crime committed by Finance Minister Pravin Gordhan involves the terms of employment agreed by an organ of State with one of its his former colleagues, previous SARS Deputy Commissioner Ivan Pillay.

Talk about a desperate attempt to nail an honest man. And given the build-up over months, what a damp squib. As Business Leadership SA put it, what is in dispute here is hardly criminal – it’s merely Gordhan’s interpretation of sections of both the Public Service Administration (PSA) and Public Finance Management Act (PFMA) legislations.

Unusually for crime wracked South Africa, there’s no allegation of tender fraud – although everyone knows that is rife. No deployment of State assets for personal gain – as at Nkandla. No allowing business partners to make appointments within the public service – erm, “State Capture“. And definitely no Gordhan hand in any cookie jar.

Nope. The National Prosecuting Authority took the unprecedented, Rand-hammering decision to issue a criminal charge against the country’s Minister of Finance because, six years ago, SA Revenue Services paid R1.14m into the Government Employees Pension Pend on behalf of the Deputy Commissioner.

At the time, the now 67 year old Gordhan was serving his first term as the Finance Minister in President Jacob Zuma’s cabinet.

The criminal charges demand that Gordhan must appear in the Pretoria Magistrate’s Court on November 2 alongside Pillay and former SARS Commissioner Oupa Magashula.

A criminal summons number 574/16 issued yesterday claims the three of them knew this money, relating to Pillay’s early retirement, should have been paid by him personally.

A second count accuses the three of “wilfully and in a grossly negligent way” causing SARS to lose money.

The third count involves the authorising of a new five year employment contract with Pillay at a time when the organisation was only entitled to enter into contracts for a maximum of three years.

The fourth count relates to the 2014 authorising of Pillay’s four year employment contract.

Pillay was one of 55 executives forced out of SARS in the first 19 months of new Commissioner Tom Moyane’s appointment. Moyane previously ran the Prisons Service and was related by marriage to President Jacob Zuma.

In the book Rogue – The Inside Story of SARS’s elite crime busting unit, author and former SARS executive Johann van Loggerenberg describes ANC stalwart Pillay as “a mentor and to a large extent a father figure.”

Read also: Why Zuma must risk everything to keep his pawn Moyane at Sars

Pillay and Gordhan are among those Van Loggerenberg says strived for a higher purpose: “they have sacrificed much for the freedom of our country; they don’t suffer fools; they work like machines; and they’re absolutely clear that much is still to be done in SA to give democracy its full meaning.”

The author continues: “they are serious and incorruptible individuals who have remained willing to sacrifice anything for a free South Africa and they are steadfast in the belief that legitimate government agencies must abide by their civil contract with citizens.”

Did Van Loggerenberg get it horribly wrong? Or has the National Prosecuting Authority? Nothing is more powerful than the truth. And in the end, it will prevail.