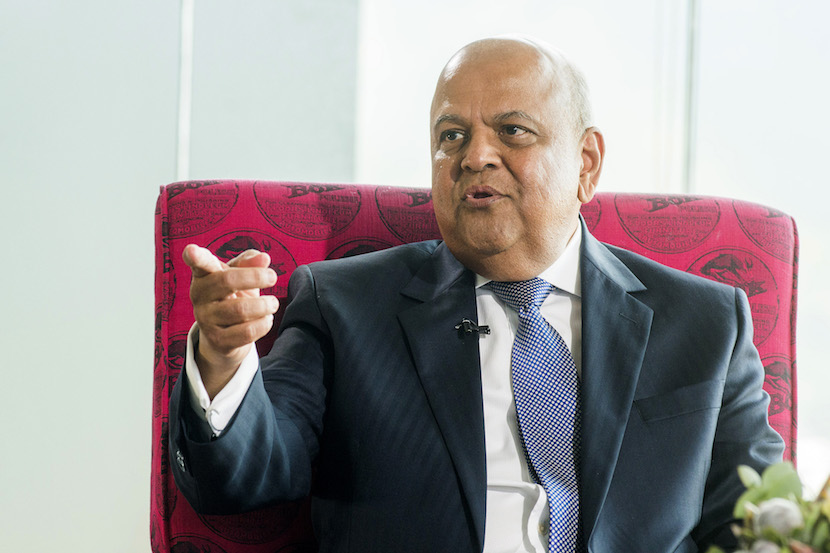 Some seemingly random events stay forever. A few years before Pravin Gordhan moved into the national cabinet, we lunched in Pretoria after a meeting at his then office at the SA Revenue Services. It was one of those relationship building exercises which occurs too rarely in this accelerated world. Afterwards, as we chatted on the sidewalk, I asked why he hadn’t succumbed like so many other ANC members to businesses ever eager to recruit those with Struggle backgrounds. “It’s not for me,” he answered, “I’m an activist and there is still much work to be done.” In the decade or so since, Gordhan retains every ounce of that conviction. After a very public demotion in May 2014, the then 65 year old chose to stay on in the cabinet despite the well-intentioned urgings for him to leave. Perhaps he was already sensing the future battle that was brewing for the nation’s soul. Indeed, it was only 19 months later when the Nenegate crisis forced on a now obviously compromised President Jacob Zuma to reappoint him Finance Minister. And since stepping into the breech last December, Gordhan has been the bulwark between SA taxpayers and the increasingly avaricious crony capitalists determined to prey on them. He has been the rallying point for those who still care enough to fight selfish dark forces whose actions will repeat the economic disasters and wholesale pillage that has so bedevilled Africa. As a result, South Africa has witnessed a war of attrition where the pressure on Gordhan has been intense. A lesser leader would long ago have caved. But the Durbanite affirmed the strength of his activist roots when telling a recent press conference “my spine is straight.” The flame of this fervent activist continues to burn strongly. Hope springs. – Alec Hogg

(Bloomberg) — Pravin Gordhan was detained three times as he worked to bring an end to apartheid in South Africa, enduring beatings and suffocation at the hands of the police. He revealed no secrets.

Now Gordhan, in his second stint as finance minister, is demonstrating equal resolve in a standoff with his boss, President Jacob Zuma. They are at loggerheads over how the South African Revenue Service is managed and over nuclear-power expansion. Prosecutors dropped fraud charges against Gordhan Monday, though they are still investigating allegations that he oversaw the establishment of an illicit investigative unit as head of the tax agency almost a decade ago.

Civil-rights groups, about 80 chiefs of some of South Africa’s biggest companies and scores of leaders of the ruling African National Congress have rallied to Gordhan’s defense and his recent speeches have been given standing ovations. He says he’s been the victim of “persecution and political mischief” driven by “rent-seekers” intent on accessing state coffers.

“I’ve been in public service for 40-odd years, inside detention, outside detention, police harassment, the works,” Gordhan, 67, said in an Oct. 26 interview. “What motivates people like us, not just me but a whole lot of people who can all get better jobs, can get paid better, is public service.”

To some investors and economists, Gordhan and his team are pretty much all that’s holding back a junk credit rating and a possible recession. His dedication to fiscal discipline — he delivered a budget update last week that proposes raising taxes and limiting spending — stands out in country that’s tired of state funds being squandered and repeated scandals implicating Zuma and his allies. Mmusi Maimane, the leader of the main opposition party, said on Oct. 20 that he was concerned that Zuma “is determined to get rid of the one set of stable hands in government.”

“Business is very confident in Gordhan’s abilities, that he is the man who can stabilize government finances,” said Isaac Matshego, an economist at Nedbank Ltd., South Africa’s fourth-largest bank. “He’s got a very solid team at the National Treasury. The big concern is if he goes, what does it mean for that team?”

On Oct. 13, prosecutors said Gordhan would face two fraud charges for illegally approving the early retirement of a subordinate, resulting in 1.1 million rand ($81,000) of wasteful expenditure. Shaun Abrahams, the head of the National Prosecuting Authority, backtracked after failing to find evidence that he intended breaking the law. The rand strengthened as much as 2.3 percent against the dollar after the decision to drop the case was announced.

Zuma told lawmakers last week that while the finance minister has his “full support,” the legal process had to run its course. His spokesman, Bongani Ngqulunga, didn’t answer calls to his mobile phone on Monday.

“The decision to drop the case doesn’t come as much of a surprise,” Rian le Roux, chief economist at Old Mutual Investment Group in Cape Town, said by phone. “Everybody was saying it was rubbish and there was no chance he could be convicted. It strengthens Gordhan’s hand. It removes an obvious reason or excuse to remove him from Cabinet.”

The ANC’s youth and women’s leagues, which are closely aligned to Zuma, have led the political charge against Gordhan. They’ve accused the finance chief of trying to circumvent the rule of law by pressuring prosecutors to drop the case against him and criticized him for being too close to big business — allegations he rejects.

Gordhan’s involvement in politics dates to the late 1960s, when he helped mobilize students and working-class communities against the white apartheid regime. He proved to be a skilled and focused organizer who built links with other pro-democracy groups around the country, said Goolam Aboobaker, former chief executive officer of the Government Pensions Administration Agency and an ex-activist who worked closely with Gordhan.

Gordhan, whose father immigrated to South Africa from India in the 1920s, spent four years as an underground operative for the ANC and worked on Operation Vula, set up to re-establish the party within South Africa’s borders during the early stages of talks to end apartheid. The police got wind of the secret project and Gordhan was detained for three months and tortured, before being released on bail.

His lawyer was Zac Yacoob, whom he had met when they were students in the 1960s and then recruited to join the ANC.

“He has always been determined, always been competent, always been unselfish, never made any money for himself,” said Yacoob, who retired as a Constitutional Court judge in 2013.

Zuma, who took office in May 2009, arrived just weeks after prosecutors dropped charges against him of taking bribes from arms dealers. In March, the nation’s highest court found that he violated his oath of office for refusing to pay back some of the 215.9 million rand of taxpayers’ funds that were spent on upgrading his private home.

Gordhan played a key role in the negotiations that led to South Africa’s first multiracial elections in 1994. Then, after the ANC took power under Nelson Mandela, he became a lawmaker and chairman of a parliamentary committee that oversaw the implementation of the nation’s first democratic constitution.

In March 1998, then-Finance Minister Trevor Manuel persuaded Gordhan to join the national tax agency and overhaul its customs and revenue administration. As head, he revamped its arcane systems and addressed the low levels of tax compliance that were pervasive under apartheid. Annual revenue collection more than tripled over the decade he was in charge.

Toward the end of each tax year, Gordhan would personally call the chief executives of some the country’s biggest companies and urge them to settle their tax bills so he could meet his revenue-collection target, according to Yolisa Pikie, his former assistant. “He was one our biggest debt collectors,” Pikie said.

Gordhan returned to politics in 2009, when Zuma tapped him to replace Manuel as finance minister, and asked him to steer the economy through the aftermath of the global financial crisis. Annual growth averaged about 1.8 percent during the five years he held the post.

Zuma’s views about the independence of the Treasury were brought home in December of last year, when he fired Gordhan’s successor, Nhlanhla Nene, and gave his job to little-known lawmaker David van Rooyen. The move triggered a sell-off in the rand and the nation’s bonds.

Business and ruling party leaders pressured Zuma to reconsider, and four days later the president announced that Gordhan and Van Rooyen would swap portfolios. Since then, Zuma has repeatedly undermined Gordhan’s authority, describing Van Rooyen as the most qualified finance minister he’s ever appointed and rebuffing Gordhan’s request to fire tax chief Tom Moyane for insubordination.

Despite his legal and political travails, Gordhan says he doesn’t intend to abandon his post unless Zuma fires him.

“My spine is still very straight,” Gordhan said when asked at a conference in Cape Town last month how he was holding up under the stress. “My generation are not just bureaucrats or politicians, we are activists. We continue to do that which is necessary to promote social justice as South Africa’s evolves in its democracy, but more importantly to stand up against injustice.”