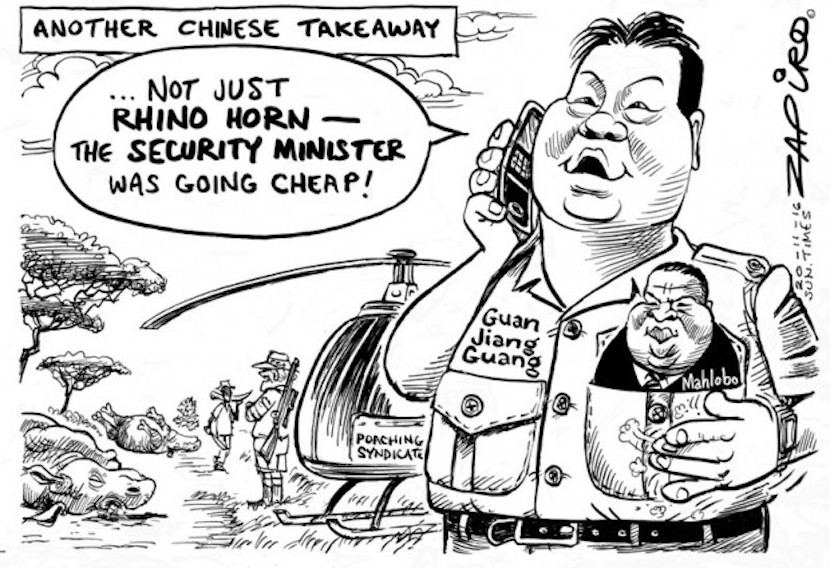 Historically, State Security Minister David Mahlobo should certainly not be ‘frustrated by the intricacies of power’, as former Mpumalanga Premier Ndaweni Mahlangu, once infamously suggested. Mahlangu said that it was acceptable for politicians to lie to the public when faced with leadership complexities. It’s hard work keeping all those balls in the air – and you can certainly lie about why you dropped a few, seemed to be the sentiment. Our latter-day security establishment – and its leadership – has shown itself incredibly adept at playing political Rubik Cube, twisting and turning this way and playing the game exactly according to the wishes of their senior political benefactors. Mahlobo is no exception. Seasoned journalist and commentator, Ed Herbst cherry picks some fascinatingly similar examples to that of Mahlobo’s recent parliamentary economy with the truth in discussing the DA’s reporting of him to the Public Protector. – Chris Bateman

To my very deep regret I have to admit that this was not true, and that I misled you and my colleagues and the House. – John Profumo, UK Secretary of State for War, announcing his resignation from politics 5/6/1963

Shortly after being appointed as premier of Mpumalanga in 1999, Ndaweni Mahlangu caused a stir when he said that it was acceptable for politicians to lie to the public, especially when they were frustrated by the intricacies of power. He also said it was acceptable for such lying politicians to serve in the highest office in the country. – Pierre de Vos Daily Maverick 20/11/2012

It was obvious from the start of his career that Baron John Profumo was destined for high political office.

Educated at Harrow and Oxford University he was, at 25, the youngest member of the House of Commons when he was elected an MP in 1940. He was married to a popular actress, Valerie Hobson and an eventual knighthood seemed assured – and then came the Christine Keeler scandal.

A friend said: ‘No one judges Jack Profumo more harshly than he does himself. He says he has never known a day since it happened when he has not felt shame; and indeed sometimes he has felt that he had little left in life ahead.’

After leaving politics, something described by Prime Minister Harold McMillan as “a tragedy” he devoted himself to charitable work and, in 1975, was named a Commander of the British Empire for this reason.

Fast forward to 24 January 1979 and the Minister of Communication, Dr Connie Mulder resigns as an MP after it was revealed that he had lied to parliament about the clandestine funding of the Citizen which, thereafter, became known as the Info Scandal.

The National Party was ruthless in getting rid of office bearers who brought the party into disrepute and it oversaw the jailing of people like Hennie van der Walt, Leon de Beer and Pietie du Plessis after they had been found guilty of criminal activity.

I was reminded of this and the very different ethos that prevails within the African National Congress when the news broke that the Democratic Alliance, with prima facie evidence in the form of video clips, was reporting State Security Minister David Mahlobo to the Public Protector, claiming that he had lied to parliament and the nation.

It wasn’t so much the news about Mohlobo’s meetings with the Hitler-loving Fees Must Fall leader Mcebo Dlamini that intrigued the public though because, as the anchor quote on this article by Ndaweni Mahlangu indicates, it is common cause among the deployed cadres that lying is an accepted norm.

No, what intrigued the public was the photographs of the honourable minister with a masseuse – and all that this implies – after he was named and shamed in an Al Jazeera documentary about rhino poaching.

There is nothing new in this.

As the Democratic Alliance unravels the cesspit of corruption implicit in the ANC’s two-decade control of the Tshwane municipality, those who have followed Carte Blanche over the years will recall programmes on this subject and how the ANC snouters there would hold workshops at expensive hotels and resorts where a ‘full-body massage’ was considered an essential part of the process.

Let us, in the words of the inimitable Detective Inspector Derek Grim cut the bovine faeces and let us not fanny about.

We can all imagine what a full-body massage involves …

Thus it was that when Mahlobo seemed to be massaging the truth in parliament on November 17, those in the opposition benches who are well disposed to him wished him a ‘happy ending’.

He has, like the unspeakable Dina Pule, clearly brought a once-respected political party into disrepute but don’t expect his departure to another ANC sinecure any time soon.

He is no John Profumo and, unlike Dr Connie Mulder, he will keep his snout in the trough for as long as possible.