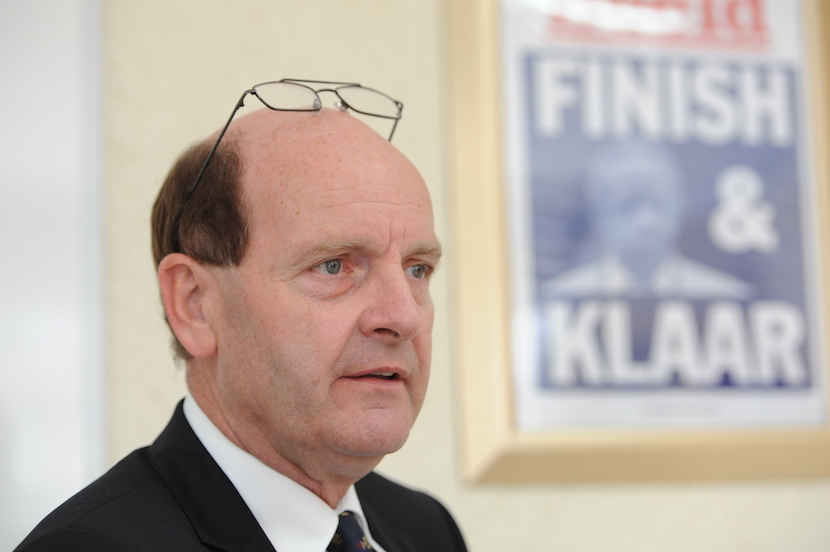 When the Brits here in London ask us what’s happening in South Africa, it’s best to shrug. Or risk the raised eyebrows of those who, while listening politely, don’t believe a word of what you’re saying. Developments in Zumaland have now gone beyond bizarre. Today delivered another example. Gauteng police chief Major General Prince Mokotedi swore under oath that a group led by forensic investigator Paul O’Sullivan should be charged with High Treason and a string of other offences for instigating a local “Arab Spring”. They are accused of digging up dirt on allies of President Jacob Zuma, Mokotedi included. The Affidavit is carried in full below the response from O’Sullivan who dismisses the General as “a criminal with a badge”. The affidavit is follows my interview with O’Sullivan on Friday when he claimed dominos in the country’s criminal justice system are starting to fall. You can’t make this stuff up. – Alec Hogg

I hear you and your criminal accomplices are getting desperate.

Is that why you’ve resorted to fabricating stories, void of all truth whatsoever and then deliberately leaking it to the media.

I hereby challenge you to take a lie-detector test, to confirm that a source really did tell you these things, against your own resignation if you fail. The test should be done at an independent institution, eg, Polygraph Institute of South Africa.

The questions should be:

If you think the whole country is so stupid as to allow a self-proclaimed Zuma supporter to hoodwink them into believing this garbage, then you have proven yourself to be wholly unfit for office.

The media have really kept me busy since you leaked this to them, via another ‘source’ of yours. They have asked me for comment, so here it is:

Mokotedi, is nothing more than a dishonest criminal, with a badge. He was unlawfully appointed by a corrupt minister of police, who decided to turn a blind eye to the fact that Mokotedi resigned ahead of a disciplinary enquiry, from the NPA, after it had been shown he had deliberately leaked false information to the media. Nhleko also turned a blind eye to the fact that Mokotedi had taken out a credit card, then run up a bill of R100,000 and not paid it, and also had judgments against him in excess of R1.1m.

The most important and telling aspects of Mokotedi’s work of fiction are the following:

Now, when it is clear that Zuma’s criminal empire is falling, which includes the likes of Mokotedi, Ntlemeza, Nhleko and many others, this is their last-ditch attempt at avoiding the inevitable long road to prison.

On 15th April 1912, when the RMS Titanic hit an iceberg, the Captain of the ship, Edward Smith, sent the crew out to rearrange the deck-chairs. It did not help and less than two hours later, Smith went down with the ship. Right now, Mokotedi, is carrying out Captain Zuma’s orders and re-arranging the deck-chairs, in a desperate attempt at diverting attention away from the criminal conspiracy he has been involved in, since his unlawful appointment in February 2016. In this case, Mokotedi, Ntlemeza and the rest of the crew will eventually go to prison with their captain. The sad part is that Mokotedi and his accomplices are using Public Funds for rearranging the deck chairs on a sinking ship.

More fools these criminals with badges, for thinking that the country cannot see through the lies of Mokotedi, which in itself amount to the offences of defeating the ends of justice, fraud and perjury.

I will not dignify Mokotedi’s work of fiction, with a response, until he has passed a lie-detector test at a reputable independent institute. I will however, continue with my efforts to send him and his accomplices to prison where they all belong.

In short, the wholly unintelligent act of Mokotedi, will hasten the road to prison for him and his accomplices, for which we should all be grateful.

God save South Africa from the Zuma crime family and their accomplices in the criminal justice system.

I, Prince Nkitsing Mokotedi, an adult male with identity number 6703125616089. Currently employed as the Provincial Head Gauteng of the Directorate for Priority Crime Investigation (DPCI), with business address, 16 Meyer Street, Germiston, and with cell phone number 071 481 3274, do hereby declare under oath in English that:

1. My responsibilities as the Provincial Head of DPCI: Gauteng include to oversee, supervise and monitor serious organized crime, serious commercial crime and serious corruption investigations. The activities that are incidental to my work include, interaction and sharing of information with other law enforcement agencies, as well as to cultivate informers for DPCI in Gauteng.

2. I was informed by a source that a meeting was held at the former house of Radovan Kreijcir, a convicted criminal, on Kloof Street in Bedfordview, which is now owned by Mr Paul O’Sullivan through intricate company shareholding. The attendees of that meeting include,

3. The source informed me that the attendees had a braai and held discussions where among other things, they identified certain people as targets for vexatious criminal investigations and shaming in the media. The motive for targeting these individuals is that they are close to or are supporters of the President of the Republic of South Africa, President Jacob Zuma. The people that were identified by the group included.

4. The attendees agreed that Mr Paul O’Sullivan should collect information and dig dirt that would implicate the above mentioned persons in any kind of transgressions especially on corruption and other acts of criminality. The group held discussions on several matters that the IPID is investigating against the Lieutenant General Phahlane and Lieutenant General Berning Ntlemeza, and that those cases must be finalized within the next month and be submitted to the NPA for decision. The group further agreed that should the NPA decline to prosecute, AfriForum and the DA should pursue for private prosecution.

5. It was further mentioned by the group that Paul O’Sullivan should raise funds for the ‘project’ and also identify more journalist who would be willing to publish stories on the targeted group. A team of lawyers will also be mobilized to push for civil litigation to put pressure on the government to suspend or dismiss that targeted group.

During discussions by the group, it became apparent that Mr Paul O’Sullivan was receiving assistance in gathering information on the targeted individual’s and others from one Candice Coetzee, a SAPS employee who is currently on suspension for giving classified information to Paul O’Sullivan without authorization. O’Sullivan has also cultivated a network of informers in the SAPS and the civilian intelligence structures.

6. The group further agreed that Mr Robert McBride and Mr Shadrack Sibiya should use the resources at their disposal in their respective areas of employment to collect information on the targeted persons and put pressure on the politicians to have these targeted individuals removed from office. It was disclosed by the group that Paul O’Sullivan has collected damaging evidence against Mr Duduzani Zuma, the President son, and that information can be used to mobilise the community revolt and pressure the President to quit office.

Robert McBride says he challenges Prince Mokotedi to do a live polygraph on tv & that he'll pay for it. Mokotedi, your move.

7. The group also agreed that the activities that they have planned against the targeted group should be used to mobilize for an “Arab Spring” type or revolt in the country. It is common course that Mr Paul O’Sullivan has been moving in and out of the county and has been mobilizing for support and funding from abroad and hide the source of the funds. O’Sullivan was further mandated to continue to make spurious and vexatious allegations against senior members in the security services in the country whilst he is outside the country to mobilise for international solidarity. It is also common cause that Mr Paul O’Sullivan, by his own admission, worked for a number of foreign intelligence agencies.

8. Furthermore, Mr Paul O’Sullivan is an accused person in several cases that are before court, and further that there are several more cases that are being investigated against him. It is therefore in his interest to tarnish the image of the current leadership of the SAPS, the DPCI, and the NPA and place himself as a white knight and a victim of corrupt officials.

9. Hence the meeting of the 3rd of December 2016 was meant to concretise and put in motion a plan to destabilise the security forces of the country and to oust the President of the country through popular revolt, it is my submission that the group knowingly and actively participated in the plan to commit high treason, intimidate and harass senior officials, and to ignite a revolution.

10. Information provided by the source to me on the 12th of December 2016 corroborates information from an intelligence report that was submitted in or about April 2016 which indicated that a meeting was held at the Michelangelo Hotel in Sandton in March between former DCPI employees, members of the Zimbabwean intelligence agency and Serbian nationals.

McBride: "A word of caution to #Mokotedi, if you are playing with a cat, make sure the cat isn't playing with you." #IPID

The intelligence report also indicated that the “purpose of the meeting was to discuss the strategy of dealing with Lt General Ntlemeza, Major General Mokotedi and the witnesses on the rendition matter which they perceived General Ntlemeza as a dangerous man who may not be leaved (sic) to run the police and who later brought Major General Mokotedi to do the ground work as the Major Mokotedi is familiar with the law”.

11. The intelligence report further indicted that General Ntlemeza and myself must be dealt with immediately include and that we should be assassinated because we are seen as the ones who are pursuing the rendition matter. The strategy would include according to the intelligence report, “to implicate them to corruption to Mafia subsequently leaked it to the media including the foreign media. They considered that an assassination should be conducted by the foreign people who shall after that sneak out of the country”. The intelligence report further recommended a three assessment on myself and General Ntlemeza. A copy of the Assessment is attached. (PNM2). The report also recommended criminal investigations.

12. It is apparent that the group that met on the 3rd of December 2016 at the house belonged to Radovan Kreijcir, have the same intentions as the one that met at a hotel in Sandton in or around March, and that there are those people who belong to the both groups and or were present in both meetings.

Read also: “Hardegat” O’Sullivan back in SA and in a fighting mood – watch out Myeni

13. It is my request that the matter must be investigated against the groups for:

The suspects in the above criminal activities are:

I know and understand the contents of this statement.

I have no objection in taking the prescribed oath.

I consider the prescribe oath to be binding on my conscience.