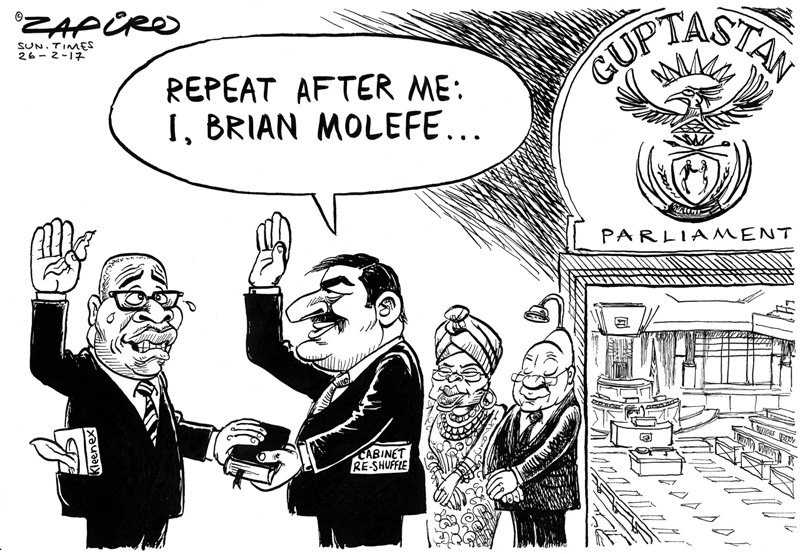 Brian Molefe’s subsequent rise from the ashes has left many wondering. The crocodile tears shed as he departed Eskom are indeed turning out to be a brilliant case of Hollywood, with talent scouts sure to give him a call. But as quickly as he’s fallen, so the Zuptoids have given him new life, although it was most likely the plan all along. With Molefe’s rise to ANC MP, the one clear message the ruling party is spreading is that corrupt practices are welcome, what with a leader that’s currently sidestepping 783 of them. And it’s moves like these that certainly add to the gloom of the country’s future. But there is a glimmer of hope, and it’s that the people are starting to see the wood for the trees. And with business players like Sipho Pityana shooting from the hip, one can only expect the movement to gain further traction. Pityana is the convenor of the Save SA campaign, and has on more than one occasion taken aim at President Jacob Zuma for his actions. And he’s not leaving the Molefe stone unturned. Below is his Open Letter to the disgraced, former CEO of Eskom. Pityana is saddened though as he once saw Molefe as the example for all to follow in South Africa. And while one wonders if anyone in the ANC is listening, or Molefe for that matter, one thing that is for sure, is that the party has a severe rot at its centre, and it is within the party itself where radical transformation is required. – Stuart Lowman

Cape Town – Sipho Pityana, convenor of the Save SA campaign, has addressed an open letter to Brian Molefe, former Eskom CEO, who has been sworn in as an ANC member of Parliament last week.

Here is the complete letter:

Under different circumstances, I would have been the first to congratulate you on your appointment as a member of South Africa’s Fifth Parliament, and your apparently pending ascension to a Cabinet post.

But I cannot do so with a clear conscience. I have watched your rise to leadership roles with great admiration, respect and pride. In a society that is determinedly forging a non-racial society, your competence and excellence in  the many spheres of leadership the nation afforded you, put paid the racist notion of equating blackness with mediocrity and underperformance. You were among those I encouraged many youth to look up to. In you I had a role model for many and a shining example of black leadership. Intelligent, confident, assertive and patriotic beyond question.

Allegations abound about your implication in corrupt dealings. These were easy to dismiss and give you the benefit of the doubt. After all, a person of your stature and reputation didn’t need corruption to aid their success, I thought.

When the public protector’s report on the State of Capture came up, I was as numbed as I was in disbelief. I thought of the many young people that I led to believe that in you they had someone to look up to.

When you resigned from your position as CEO of Eskom last November I, like many others, had hoped you were being true to your word – that you were quitting “in the interests of good corporate governance”, and acting “in the  public interest”. Desperately, I defied my sense of rational and believed you. After all, you were the only director prepared to take this unusual step. My faith in you was lifted once more, even if a little bit.

Like so many, I hoped you would give us a proper explanation for your conduct at Eskom, your handling of the Tegeta deal, or your closeness to the Gupta family – all of which were exposed, in disturbing detail, in the public protector’s report.

I hoped you would develop a more credible explanation for the amount of time you spent embedded at the Gupta compound, rather than that awkwardly embarrassing excuse about the “Saxonwold shebeen”.

I felt that the tears you shed at your press conference were real, and that you deserved sympathy and support. I was gullible because I was clinging to a Brian of yesteryear, a beacon of black leadership.

Even then, I remained steadfastly hopeful that you would use the time to reflect on how you became embroiled in the web of corruption built by Jacob Zuma and his cronies.

It hurt many of us to see such a young man, someone with great potential, stumble – and we hoped against hope that you would use the time to get back on the right track.

For me, February 23 2017 will go down as the day when I had to come to terms with the fact that the Brian Molefe I knew had turned against the values I respected and admired in him.

It will mark the day you tossed aside your own integrity and foolishly opted to be a tool of state capture rather than an instrument of democracy.

You have thrown away what was – at least until recently – an excellent track record as a young black professional who was actively involved in shaping our new democracy, where the constitution is sacrosanct and where the resources of the state are used to advance the cause of the poor and the marginalised.

But you’ve sold all that for a place at the high table of the forces of state capture who have deployed you to Parliament with an ultimate intention of a Cabinet role to carry out their dirty work.

Three months since you stepped down, “Honourable Member”, it is clear that you have done very little reflection, and you have absolutely no public interest – only your own interests, and those of your handlers.

Your handlers are well-known, thanks to the Public Protector. They are the people who stand at the centre of an elaborate web of corruption, collusion and looting. With our corrupt President, Jacob Zuma, the worst president in the history of the ANC and post apartheid South Africa, at the epicentre.

Can it really be you amidst these people, Brian? Or is it a dreadful nightmare?

Your appointment as a Member of Parliament is living proof that the Zuma administration does not punish corrupt conduct – it rewards it.

Soon, you may have unfettered access to the public purse, and you and your handlers may be able to sign off on the trillion-rand nuclear energy deal, with all its kickbacks. I fear that you may be able to divert even more public money into your pockets from tenders, and be able to use state-owned companies as your personal piggy-banks.

As I reflect on this, I resign myself to the fact that even if I got to you timeously to persuade you against accepting the invitation to go to Parliament, I might not have succeeded. After all, you defied your own conscience. You must be aware though that Zuma has shown us in the manner he sacrificed so many gullible leaders that there’s no honour among thieves. Be sure, he’ll sacrifice you similarly when the moment comes for him to save his skin.

The trail of destruction of not only many political leaders, but also many others  of your calibre, the ANC and most importantly the country raises the urgency to rid our nation of the Zuma leadership. As I urge you to rethink your position, I implore you to take the president with you in the event you decide to do the right thing.

Your project with him will fail because we will not let it happen. Believe me, a growing number of South Africans – inside and outside our once-glorious movement, the ANC – are determined that it won’t.

Day by day, more and more people can see through what you and your cronies are up to. They are joining campaigns such as Save South Africa, they are speaking out in public, and they are challenging those who have abused their authority through cabals like the Premier League.

You’ve come a long way, Brian: from chief director in the National Treasury, to head of the PIC, CEO of Eskom, Member of Parliament and now possibly deputy minister – some even say minister – of finance.

It’s so unfortunate that you had to get there through the back door.