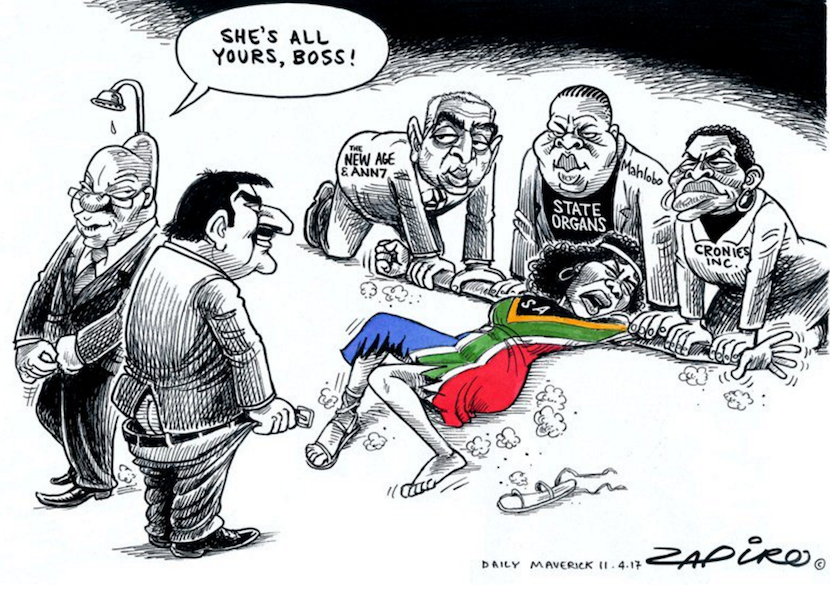 It is a source of continued amazement how puffed up some local media pundits allow themselves to become. Especially when attempting to play in leagues far above their stations. This self-aggrandisement is easily amplified in social media echo-chambers, fooling such self-made legends into believing their own PR. Freelance journalist Marie-Louise Antoni is having none of it. She assessed the outraged reaction to Zapiro’s powerful Gupta-rape cartoon and found it to be mostly superficial. I like her style. And get what Zapiro meant when he said he’d reflected deeply before penning his latest masterpiece. In stark contrast to his critics, Jonathan Shapiro aka Zapiro is world class. He studied architecture then became an anti-Apartheid activist (the authentic kind who spent time in jail) before turning to his life’s work. In Davos I have seen first hand the deep respect shown him by global cartoonist peers. His latest is just another reflection of the raw courage and intellect of a national treasure. One who really doesn’t deserve the brickbats of paper tigers. This article was first published on Politicsweb. – Alec Hogg

It was the eve of two events – a national shutdown and President Jacob Zuma’s birthday – and South Africans were celebrating their near unanimous antagonism toward a corrupt, criminal president. But while the country rallied around this common cause, certain commentators decided a cartoon was more worthy of our contempt.

Published in the Daily Maverick on Tuesday, the Zapiro cartoon depicts three men holding down a black woman wearing a dress in the colours of the South African flag. The trio of stooges surrounding her represents our captured media (The New Age and ANN7), our captured state organs (Minister of State Security David Mahlobo), and our captured cronies (the ever-sober Bathabile Dlamini). With his back turned, a satisfied Zuma zips his pants and exclaims to acting-president Atul Gupta, “She’s all yours, Boss!”

The trenchant cartoon reiterates Zapiro’s 2008 rape of Lady Justice, which alluded to Khwezi’s allegations against Zuma and the original meaning of rape – which is to seize or take away by force –  and the ceaseless looting and plunder that is occurring under this presidency.

The Twitterati were not amused, nor did they appreciate the re-use of this metaphor. 702 radio host Eusebius McKaiser said: City Press journalist Charl Blignaut started with “Genuinely can’t believe this cartoonist has learned nothing!” before chastising Zapiro and the Daily Maverick for their “triggering, patriarchal obliviousness and disregard for other people’s trauma”.

The agenda is a heady cocktail of sanctimony and faux outrage, but also of outright falsehoods. Take for instance Esethu Hasane, Minister Fikile Mbalula’s spokesperson, who tweeted “Pres Mbeki and Pres Zuma monkeys according to Zapiro. He says cartoonists like him are not racist.” He attached the following image: Like all the best lies, this was a half-truth. The full cartoon is as follows: The modus operandi of identity politics practitioners is the studious deflection of facts and the wielding of a glossary of catch-all terms. These are meted out as death-blows to any debate. Here we find our safe spaces, trigger warnings, and cultural appropriations. In yesterday’s round, we had the “violence” perpetrated – by the cartoon – on “black women’s bodies”.

Africa Check’s head of training and research, the journalist Nechama Brodie, found the cartoon “problematic” because of its perpetuation of “rape culture”. She took exception to the portrayal of rape as only happening to “other people” and being committed “only by black men”. Perhaps Zapiro should have been more mindful of diversity and depicted the rape of a white woman. But what do you suppose the reaction then might’ve been?

In their righteousness, these guardians of morality furthermore claim to speak for all women:

When a number of women contradicted her and suggested she might want to consider her own confirmation bias, Brodie said, “Oh, sorry. 99.9% of the women on my timeline.” But here’s the problem: media influencers create carefully curated timelines, where muting and blocking are favourite weapons. Their realm is the safe space of an echo chamber.

Daily Maverick Opinionista Rebecca Davis also decried the use of rape as a metaphor, but when someone suggested she might need to “revisit her definition of metaphor,” she posted the following tweet:

Thanks to her tremendously privileged education it appears Davis now holds the monopoly on all metaphorical discussions.

While our perpetually outraged writers and journalists claim to support freedom of expression, they fail to acknowledge the slow-creep of self-censorship they are steadily imposing. This is the censorship that ordinary people have started to practice in order to avoid the baying mob. The group of online bullies who, when they call for the suppression of viewpoints, indignantly claim they are not infringing on anyone’s rights.

The mob that is not afraid to dox so-called perpetrators – a dubious, illegal practice that often entails the publishing of a victim’s personal details including their physical address, with the implied threat that this entails. The mob that pursues its quarry tirelessly, until jobs and titles are lost. The mob that gleans its power from bolstered numbers and influential ringleaders. From the insidious, immoderate views held by the representatives of some of the country’s most prestigious publications.

The editor of the Huffington Post South Africa (and former Mail & Guardian editor) Verashni Pillay wrote, “No one who has followed Zapiro’s trajectory since the Shaun Abrahams cartoon should be surprised by this cartoon. He’s stopped listening.” But has Zapiro really stopped listening or does he simply refuse to bend to the authoritarian, half-wit prescriptions of his critics? Brodie similarly used the word “stab”, as well as the words “rapey” and “balls-in”. If she were famished and prepared to “kill” for a sandwich, would she have triggered our innumerable attempted murder victims?

When will this onslaught on words and expression end? The realisation that trigger warnings were a sham became clear to me when a writer in an online group felt compelled to include one in a poem she’d written. The theme was a doctor acting lasciviously toward his patient, although the piece was not explicit. The writer no doubt felt compelled to add it because of the authoritarian, bullying climate of the group. Another woman was chastised for writing “women with periods”, and was told to write “people with periods” instead. The apogee however came when the same group argued whether or not the phrase “tone deaf” was “ableist”. Sadly, the word “crazy” is also verboten.

For too long a shrill minority has dominated our media. Is it too far a stretch to lay the blame for the national divisiveness in our public debate squarely at their – and government’s – feet?