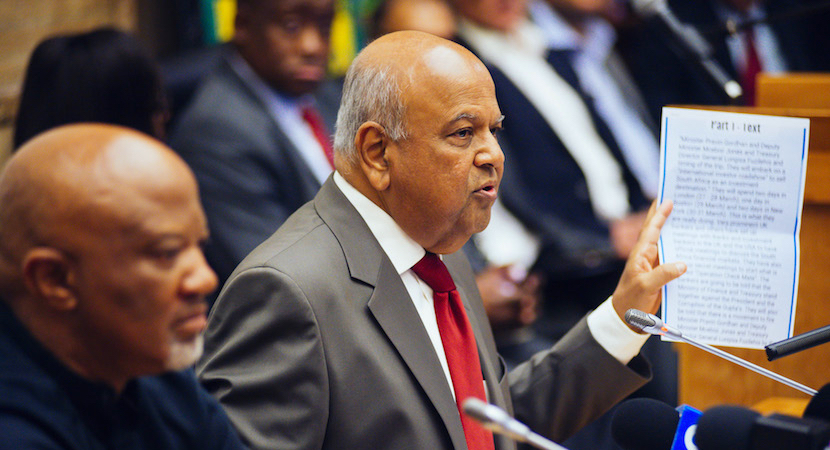 JOHANNESBURG — It’s no secret that one of the reasons former Finance Minister Pravin Gordhan was shown the door by President Jacob Zuma was his hold over the South African Revenue Service. It’s one of the levers to the country’s finances and the spat with current commissioner Tom Moyane (A Zuptoid appointee) and Gordhan was clearly evident, with the former missing in action at Gordhan’s final budget. Gordhan has finally opened up publicly on what he says is wrong at the revenue service, having previously spoken generally rather than pinpointing the key issues. Gordhan was notorious in telling the South African public to join the dots when he was fired, and at a Wits Business School event on Monday, he joined a few more. Simply put he said key leaders, the good people, were being chased out of SARS because they stood in the way of dodgy deals. Edmund Burke famously said the only thing necessary for the triumph of evil is for good people to do nothing. Cape Messenger editor Donwald Pressly reports. – Stuart Lowman

What has been suspected for ever so long has now been confirmed: SARS is captured. Although former Finance Minister Pravin Gordhan has hinted at major troubles with the leadership of SARS – led by a man largely seen as a pawn of President Jacob Zuma – he has now told a Defenders Dialogue that good people were chased out of the organisation.

Prior to Gordhan becoming a minister – a job from which he was fired in March this year – he was Commissioner of the SA Revenue Service. During this time he and his leadership team built up the institution’s reputation as a reputable – indeed independent – tax collection machine.

The good people had stood in the way of dodgy dealings is the way that eNCA reported Gordhan on Tuesday morning. It is not new that Gordhan had a tetchy relationship with Tom Moyane, the SARS commissioner. He was noticeably absent from medium term and main budget briefings at parliament in October last year and in February this year. But now the truth is out.

Up to now Gordhan has simply said, when asked about the troubles at SARS, that an institution can take years to build up, but it could be destroyed overnight. He said this at a budget briefing and he repeated it once again on Mandela Day.

Gordhan and former public protector Thuli Madonsela called for more protection for whistleblowers. Gordhan warned that institutions like the Hawks, the NPA and SARS  were increasingly themselves seen as captured. “That is a serious issue…Where they are supposed to be collecting taxes or prosecuting people or investigating the organised crime…there is something else…(they are) going after the honest people and making sure that you rid yourself of the good people from institutions.”

They included a former SARS official – and one time acting commissioner – Ivan Pillay, who with him (Gordhan) faced an aborted prosecution over his pension payout. “To Ivan Pillay and his colleagues who were at SARS…who got chased out…because they were standing in the way…of the wrong things that were happening in that institution.” He believed that there would be more news about those happenings in due course.

The Sunday Times has reported that national prosecuting authority head Shaun Abrahams has assembled a team to probe state capture.

Mandonsela said her office had been investigated by the Hawks four times after she released an audio report on state capture in which she interviewed President Zuma. Zuma denied he had been consulted about the report and had been forced to interdict her. “The issue of the Guptas…state capture…is a big issue,” eNCA reported Zuma as saying.

eNCA said the audio – which was done with the president’s knowledge – showed that the president did not tell parliament the truth.