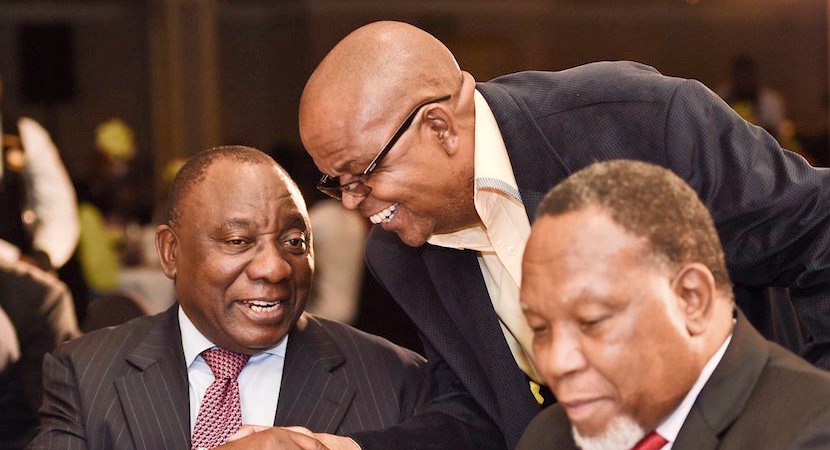 JOHANNESBURG — It’s as if South Africa currently has a love affair with Cyril Ramaphosa after he won a brutal ANC leadership battle in December last year. While he is a breath of fresh air when compared to Jacob Zuma, the reality is that Ramaphosa has an uphill battle ahead of him in terms of reuniting his party and ridding it of corruption. The thing is, he will never succeed in rooting out all corruption. But if he goes a long way in reducing it, the ANC will be a force to be reckoned with in 2019. – Gareth van Zyl

Whatever the stubborn staying power of President Zuma, the power baton is currently being passed to the new ANC President, Cyril Ramaphosa. Notwithstanding his uncomfortably close victory in December, Ramaphosa is set to mould the ANC away from the dark excesses of the Zuma year. Or, at least, he will attempt to do so.

In his two major addresses since being elected, the new ANC leader and heir apparent to the top job has largely spoken to his party. He has attempted to walk a very tough balancing act between the restless populists, worried rent-seekers and frustrated pragmatists. It’s all been about carefully worded and nuanced references to renewal and of course, unity.

Still, Ramaphosa’s optics and sound-bites are so much better. And it’s largely due to his perceived credibility as a messenger of integrity and skill. In itself, this is a substantial step forward. But, over just a few weeks, Ramaphosa has addressed most elephants in the room – including that of the future of Jacob Zuma himself.

From reading his party the riot act on corruption and state capture to calling out the gross inefficiencies in the SOE sector, Ramaphosa has articulated a check-list of what needs to be corrected and – without mentioning names – has highlighted by implication the dismal performance of government under Jacob Zuma.

Importantly, Ramaphosa has done this in a way that makes even those relatively uncomfortable with him (the NDZ faction) feel at ease. And that is the crucial first step in project unity for the party. Ramaphosa needs as many cadres on board as possible. He cannot afford a descent into an internal revolt which many had predicted for the ANC post-conference.

This strategic approach is but a first step to building a better ANC – and the spin-off into a better South Africa. It is crucial to achieve unity to secure a 2019 election victory. There is little point in antagonising too many if this means losing power.

But ultimately, Ramaphosa has a bigger challenge than just his own party. And, having made substantial strides – at least in sentiment – over the last few weeks, it will soon be time to talk to the broader South Africa and not just the branches, leagues and associated ANC apparatchiks. And, given the flagging economy and deep social malaise of rising unemployment, a slippage into poverty and a dysfunctional education system producing as many drop-outs as it is matriculants, there is an urgency of reality that needs to be addressed.

Getting the cadres on board is a priority – but changing the way governance has faltered in the broader South Africa is the real challenge. The only way for Ramaphosa to begin this arduous task is to assume the office of the Presidency as soon as possible. Each day that Jacob Zuma hangs onto power, is one day less for Ramaphosa to attempt a reboot. Each day Zuma remains in power, is another day that Ramaphosa’s authority is dissipated by those who have so disappointed South Africa over the last decade.

For Ramaphosa, leveraging the power of the State to deliver a credible message of change will change the internal dynamics of the ANC. A new cabinet – even an interim one serving until 2019’s election – can bring together a group of skilled and respected leaders who can reverse the moribund actions of their predecessors. And the appointment of a new generation of bureaucrats more committed to pragmatic policy than populist-driven patronage accumulation can begin to really assist the State.

Furthermore, inclusive economic growth requires a more inclusive approach to ANC politics. Whilst clearly a party intent on correcting the wrongs of the past, minorities still need to feel needed and respected. Ramaphosa will find uphill should he not be able to draw in – at least in terms of sentiment – a broader cross-section of South Africans who would not vote for the ANC.

Ramaphosa’s many dangers remain. A reformer who threatens the old ways of rent-seeking accumulation can find resistance. And for sure, those rent-seekers are still very much around – and in positions of influence too. Those deep divisions manifest in the Alliance have not dissipated and all formations will be demanding their pound of political flesh from the new President. Not to mention the broad policy dissonance affecting a broad swathe of issues other than potentially damaging ‘revolutionary’ rhetoric.

But, the old adage of ‘nothing succeeds like success’ is crucially applicable here. Assuming Ramaphosa gets a grip on power – and exercises it positively – even his detractors can become supporters. After all, if it means an electoral victory in 2019 and being back in the ‘pound seats’ for another term, his support within the party can mushroom.

So there is a real symbiosis between delivery to the broader South Africa and regaining the confidence of his own political party. Should Ramaphosa at least create a sentiment-shift for a depressed nation, he will succeed in strengthening his own hand within his own party. Whilst the ANC always seems to look inwards at its own cadres, it is equally those outside the halls of power and even those looking on from outside our borders, that will contribute to a ‘feel-good’ factor about the country.

Furthermore, as sentiment improves and perhaps, just perhaps, so do the depressed economic indicators, the fuel that feeds populism and irrational political activity can be also be countered.

But make no mistake. The pressure is on. Ramaphosa has to restore investor and voter confidence rapidly. The economic malaise demands attention. And, voters are impatient and will seek out alternatives across the political spectrum should this not occur. Time is of the essence.