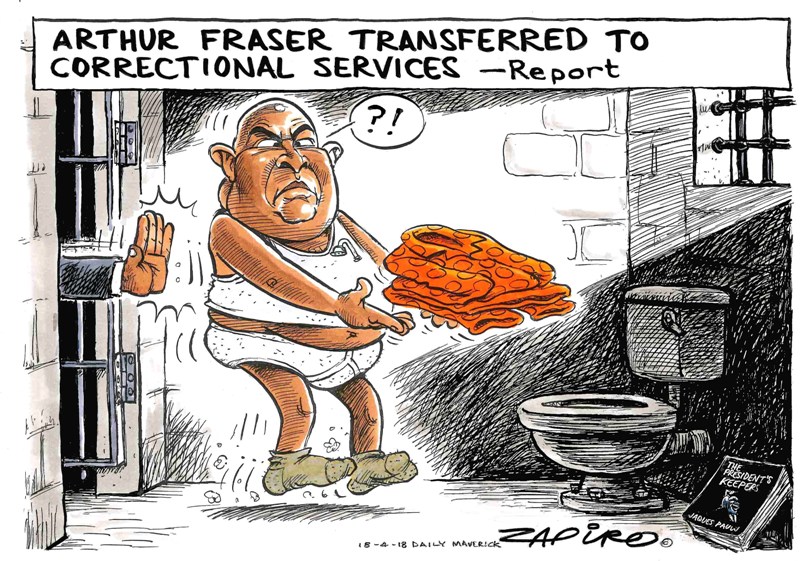 JOHANNESBURG — It’s great that the Commission of Inquiry into State Capture has called on officials to investigate dodgy Bosasa’s controversial prison tenders. It’s important that we don’t only see revelations out of this inquiry, but actual investigations and subsequent jail time for the criminals involved in this mafia activity. However, just as this recommendation came through, it then emerged on Twitter from several journalists that the person to carry out this investigation would be none other than Arthur Fraser, the man who was exposed as a dubious and allegedly super-corrupt spy in Jacques Pauw’s The President’s Keepers. President Cyril Ramaphosa moved Fraser from state security to become prisons boss in a move seen to be demoting Fraser but keeping him ‘under the same tent’. Minister for Justice and Correctional Services, Michael Masutha, says his department is now reviewing the Bosasa contracts, but that Fraser will be heading up that probe. What could possibly go wrong? – Gareth van Zyl

I ask Minister Masutha if he has ever received any form of bribe from #Bosasa.
“The answer is no,” he says.
He confirms to @QaanitahHunter that the person responsible for investigating Bosasa contracts is National Commissioner Arthur Fraser.

The man responsible for investigating Bosasa contracts at DCS is none other than Arthur Fraser! Huh? As former DG of SSA he wasted a billion rand of tax payer’s money on his PAN spy project. Shows the absudity of Ramaphosa when he shifted Fraser to DCS to get rif of him at SSA.

(Bloomberg) – The head of a judicial panel probing corruption in South Africa directed the authorities to investigate allegations that almost R1bn ($75m) was paid to services company Bosasa to provide catering in the nation’s prisons without it doing the requisite work.

“There was no labour from Bosasa, it was the inmates that cooked,” Dennis Bloem, who chaired parliament’s portfolio committee on correctional services from 2004 to 2009 while he was a member of the ruling African National Congress, told the panel Friday. “The only thing that Bosasa was doing was to give inmates a certificate for training.”

The commission of inquiry headed by Deputy Chief Justice Raymond Zondo was set up to probe the looting of taxpayer funds during former President Jacob Zuma’s tenure. In January, Angelo Agrizzi, who served as Bosasa’s chief operating officer from 1999 to 2016, revealed how the company paid politicians and officials bribes to secure contracts and avoid prosecution.

One of Bosasa’s catering tenders that was awarded in July 2004 ran for three years and was worth R240m a year, said Bloem, now a member of the Congress of the People, a small opposition party.

If Bloem’s testimony is true, “then the Department of Correctional Services was paying Bosasa millions of rands for absolutely nothing or very little,’’ Zondo said.

The Department of Correctional Services is reviewing its contracts with Bosasa, Justice Minister Michael Masutha told reporters in Pretoria, the capital.