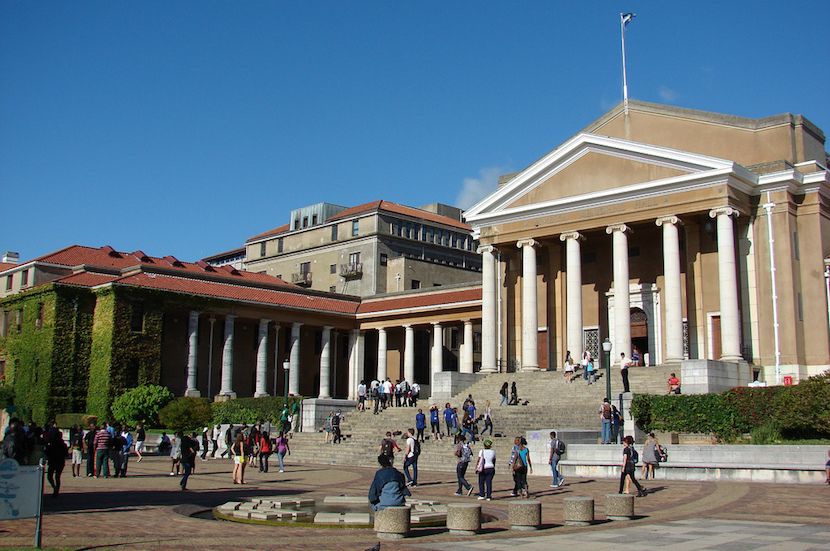 While not the only student to have returned to UCT to incrementally garner degrees over several decades, Andrew Kenny’s contribution today on the slow decay of academic freedom there is enriched by his intermittent soundings. I covered some of the freedom of speech debacles there as a reporter on the Cape Times in the 1980’s, so it’s fascinating to hear Kenny outline how things went downhill from then on, juxtaposing them with an earlier time when students protested in support of lecturers. Perhaps, the most tragic example of brutish, bullying behaviour was the “Fees Must Fall,” 2016 protest, after which UCT’s Dean of Medicine, the globally-respected cardiologist, Professor Bongani Mayosi, committed suicide. I got to know this selfless, delightful man, and independently, some of the hugely-talented previously-disadvantaged young doctors he went out of his way to help. He could not come to emotional grips with the radical student victimisation of him and other colleagues. Debate requires a willingness to hear the other side. This doesn’t fit the agenda of some radical student groupings before whom the UCT campus hierarchy has virtually genuflected. Universities, by their very nature and purpose, do not swim with the tide. Kenny argues that UCT has finally lost the plot. Story courtesy of Daily Friend. – Chris Bateman

There was a time when you were allowed to be exposed to ideas you didn’t agree with.

If you want to understand how much the University of Cape Town has declined as a centre of academic freedom, you can do no better than read its Alumni News for 2018. Pages 38 and 39 alone are enough to turn your stomach. 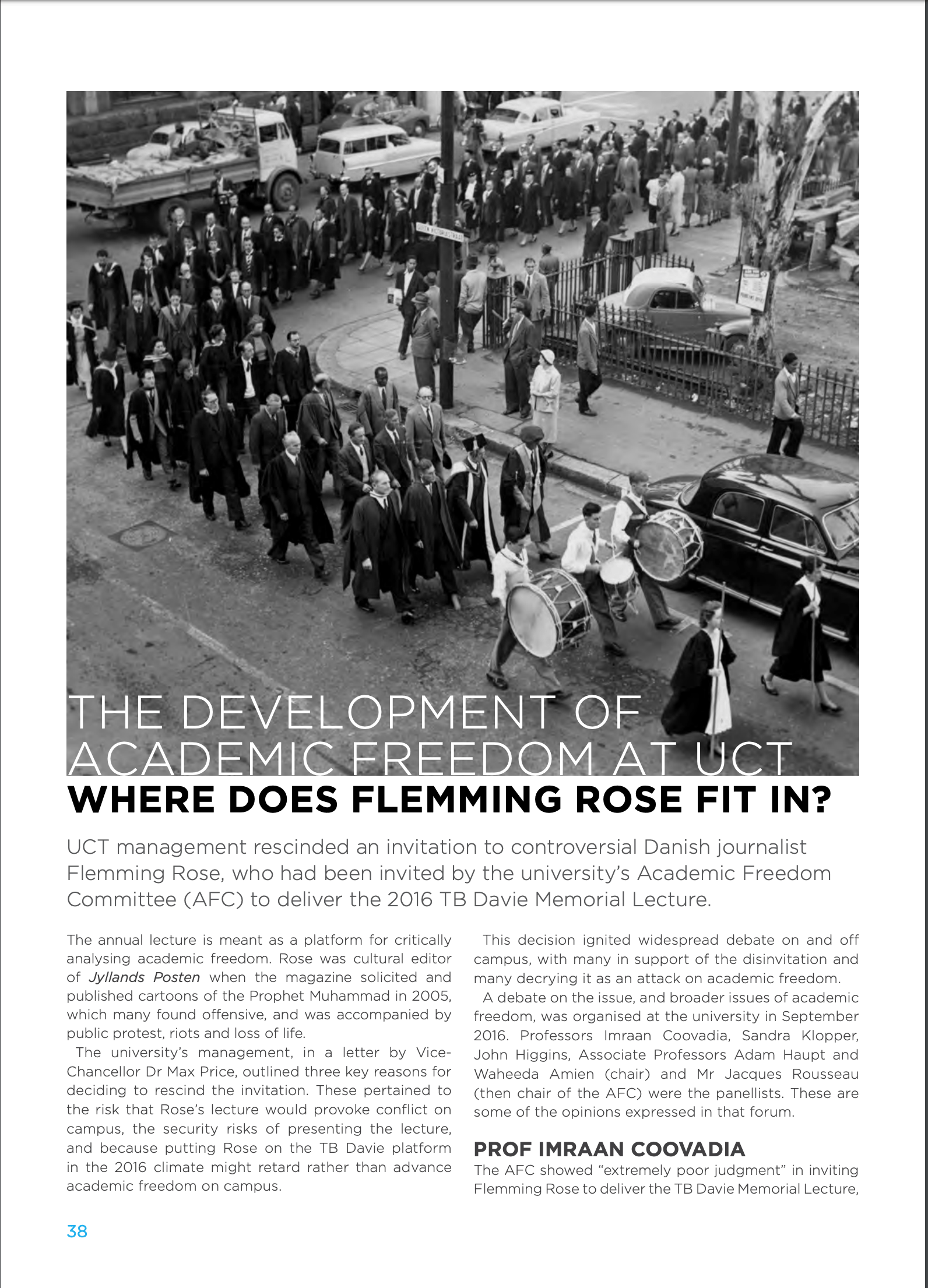 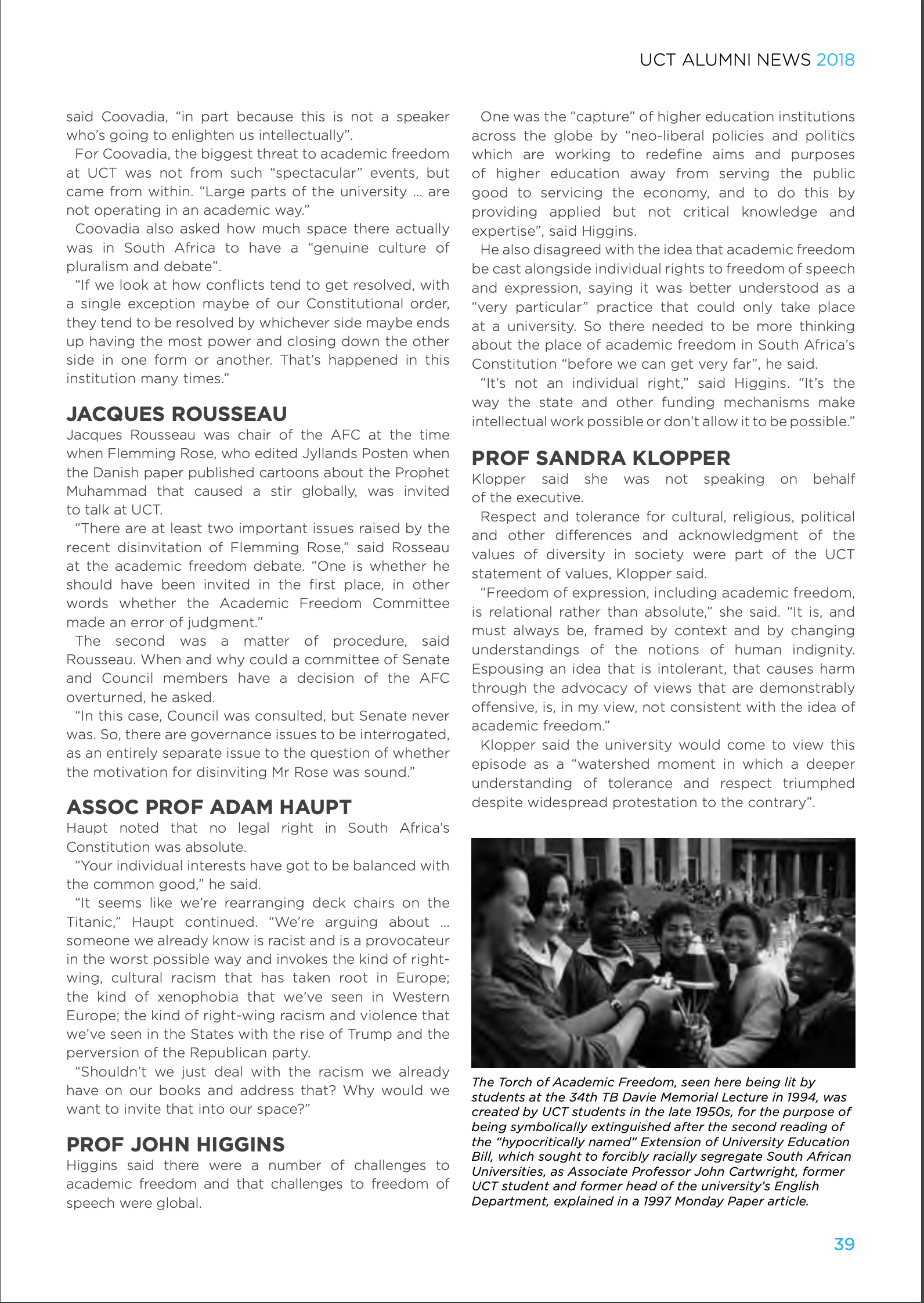 I have had three sojourns at UCT: from 1967 to 1970 studying applied maths and physics, 1984 to 1986 studying mechanical engineering, and 1997 to 2005 working in energy research. I happened to be there for momentous events.

In 1968, I joined the Archie Mafeje Sit-In. Mafeje, a black man, had been offered a post as an anthropology lecturer. The apartheid government told UCT to withdraw the offer. The students occupied the Bremner Administration Building and vowed to stay until UCT refused. I agreed with the students.

UCT then had considerable freedom of speech. There were rowdy mass meetings and open arguments between different ideologies and beliefs. There was genuine ‘diversity’ of ideas. You were allowed to be exposed to ideas you didn’t agree with. There were no ‘safe spaces’. Unfortunately, the government’s racist policies meant that most of the lecturers and students were white.

I returned in 1984. The mood had changed. There was now heavy censorship, coming not from the government but from the students and staff. Rude argument had been replaced with reverential consensus. Some departments were heavily Marxist and if you had put a strong case for capitalism you would fail your exam. (Universities are the most snobbish places on Earth and, since Marxism is the fundamentally snobbish belief that superior people should rule everybody else, it is only natural they should be attracted to it.) You began to hear the proposition, now prevalent, that anybody who believed in free speech was a ‘right-winger’.

In 1986, black students disrupted a course given by Conor Cruise O’Brien, the famous Irish politician, academic and liberal. Somebody accused him of breaking the ‘academic boycott’, which nobody else had heard of. The bullies demanded O’Brien be expelled. This was the opposite of the 1968 Mafeje affair, where the students wanted the academic to be admitted. UCT under Vice Chancellor Stuart Saunders caved in and O’Brien had to go. This was a key moment for UCT. It established the policy of craven surrender to the strongest bully.

A similar case, ignored by UCT and the media, happened to a friend a few years ago. Kenneth Hughes is widely regarded as the cleverest man at UCT (although he has been forced into retirement). He is a mathematician of the highest calibre but also highly versed in philosophy, economics, physics and history. He is a fearless liberal. He was asked to present a short course on the economic history of the 19th century. He quoted from Karl Marx – surely an important figure of that time? He quoted Marx as praising the British Empire for propelling people in Africa and Asia into the next phase of economic development. (In the Communist Manifesto, Marx spells this out very clearly.) At this point, his black students shouted him down, denounced him as a racist and imperialist, and demanded UCT to stop his course. UCT did so in its usual servile way.

‘Rhodes Must Fall’ saw UCT sink deeper. Rhodes was indeed an imperialist of the most vulgar and shameless kind. He thought English culture superior to African culture and the English language destined to become the ‘universal language’. He promoted imperial sports such as cricket, rugby and soccer. In 2015, students demanded that the statue of Rhodes on the UCT steps be removed and UCT to be ‘decolonised’. They wanted it to be decolonised by keeping all the things that Rhodes had championed, including the English language and most imperial culture and sports. Nobody at UCT or in the media spoke a word against this hypocrisy. Instead, as usual, UCT simply capitulated.

Now to pages 38 and 39. In 2005, Flemming Rose, a liberal Danish journalist published a group of cartoons of Muhammad. I’ve seen them all. Except for one, showing Muhammad with a bomb in his turban, they were exceedingly mild. Far, far worse cartoons of Jesus, mocking him, are shown routinely in Western papers and magazines, including South Africa, with no fuss at all. But Rose’s cartoons caused uproar and violence. He was simply trying to make a point for freedom: if you were free to draw cartoons of one revered religious leader, why not of another? In 2015, UCT invited Rose to speak there. The bullies screamed in fury, and so Max Price, the cringing VC, withdrew the invitation.

Then a true champion of liberty came to the rescue. In 2017, the Institute of Race Relations invited Rose to speak in Cape Town and Johannesburg. I heard him in Cape Town. He was excellent: restrained, factual, convincing and liberal. On pages 38 and 39 of the Alumni News, you will see Rose denounced as ‘racist’, as ‘right-wing’ and ‘a provocateur’. UCT’s descent into intolerance and the closing down of ideas is surely complete.