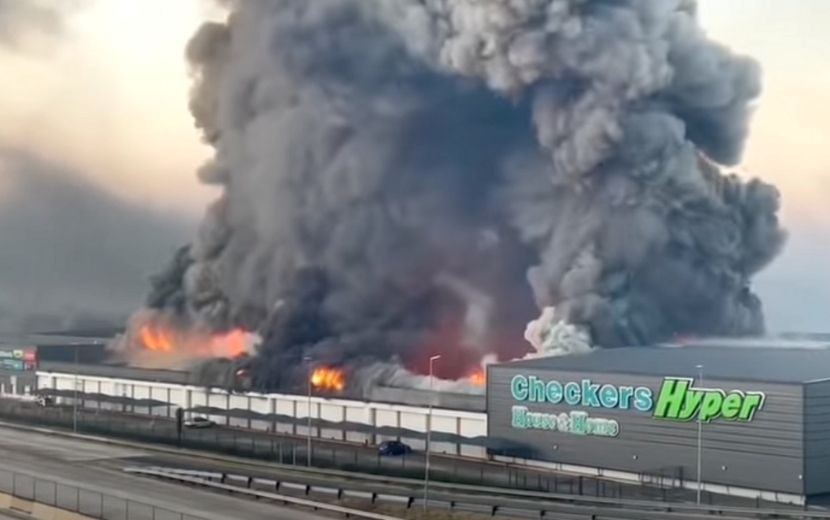 Having been to prep school and (briefly) university in the city, and with close family there, I have great affection for Pietermaritzburg, now the epicentre of looting bedevilling our country. “Sleepy Hollow” is anything but right now. For perspective into what’s really happening I called the CEO of PMB’s business chamber, Melanie Veness, a dynamic leader possessing deep reserves of energy, enterprise and commitment. Like her city, she is on the brink, pleading for a State of Emergency to protect the few of the KZN capital’s businesses which have managed to repel the locusts. Click here to read/listen.

Another desperate cry for help is contained in the saddest press release among tens of thousands I’ve seen in four decades of journalism. Received yesterday from Gayle Crow, communications chief at property company Exemplar, it reflects the unprecedented chaos wracking the country (which for SA, says something). It reads:

The Mall of Thembisa in Clayville can confirm it has received reliable intel that it has been marked as a target in the ongoing looting and unrest that is currently taking place in Gauteng.

After coming under significant attack from high calibre, live ammunition throughout the night of Tuesday 13 July, the mall was able to repel the threat thanks to the hard work and commitment of the teams on site.

It has however been credibly confirmed that we will face more intense and organized attacks tonight, Wednesday 14 July. We are calling on law enforcement agencies, SANDF and government to assist us in protecting the mall at all costs.

As an entity that has been instrumental in the creation of more than 4 500 jobs direct jobs for the community it is vital that we receive the assistance needed to protect the mall.

We would like to thank the community for their efforts in assisting us to date but at this stage we urge the residents of Clayville, Thembisa and surrounds to stay at home for their own safety. We anticipate substantial attacks throughout the night and for the safety of our community and their families we urge them to stay indoors and away from the mall.

Melt van der Spuy, a regular correspondent, weighed in on the debate around censorship, whose relative importance has faded somewhat. Dr vd Spuy, a theologian, has contributed some thought-provoking articles for BizNews. As ever, I found these insights valuable. His email reads:

Boy, your inbox must be wild right now.

‘In times of uncertainty opinions tend to be very strong. And, of course, It’s a time in history now where expressing strong opinion one way or another is divisive. The full truth about the long term effects of the current vaccines (for good or bad) will ultimately only be known in hindsight. In the interim though, the thing that disturbs me most is the anger at disparate views when they are expressed in the public realm, or the wholesale censorship of the same. Freedom of thought and speech is a foundation of democracy. If you tell me the earth is flat and Apollo 11 never landed on the moon, I would strongly disagree with you, but I would defend your right to express your view no matter how ‘whacked’ I might think it is.

In no instance in human history that I am aware of has conversation banished from the public realm, or wholesale censorship of disparate views ever, as in ever, benefitted humanity.

In all cases that type of censorship and shutting down has only led to great human suffering and tragedy. I fully understand that people feel strongly one way or another. I don’t understand how those who are 100% convinced that vaccinating the world is the only way of resolving the issue feel that it’s acceptable to censor alternative views? If being pro-vaccine and scientifically minded leads one to accept and promote the new vaccine technology I would think that the same mind-set would be hugely concerned about the protection of civil liberties and would be promoting and protecting those with the same energy. I don’t see that much concern over issues of increased censorship and control that are upon us globally. COVID will ultimately play itself out one way or another. If what remains is a tightly controlled and censored society, what is yet to come will be way worse than the pandemic. Never in human history has that kind of censoring been beneficial, why should it be so now? If we don’t learn from history, as the saying goes, we will be doomed to repeat its mistakes.

My long term concerns are less around the pandemic than the demise of the democratic foundation that seems to be playing itself out globally. What Biznews does by publishing all rational views is imperative to the survival of democracy, civil liberty, and free speech. Please keep on doing it, despite the ill thought through critique that will come your way.’