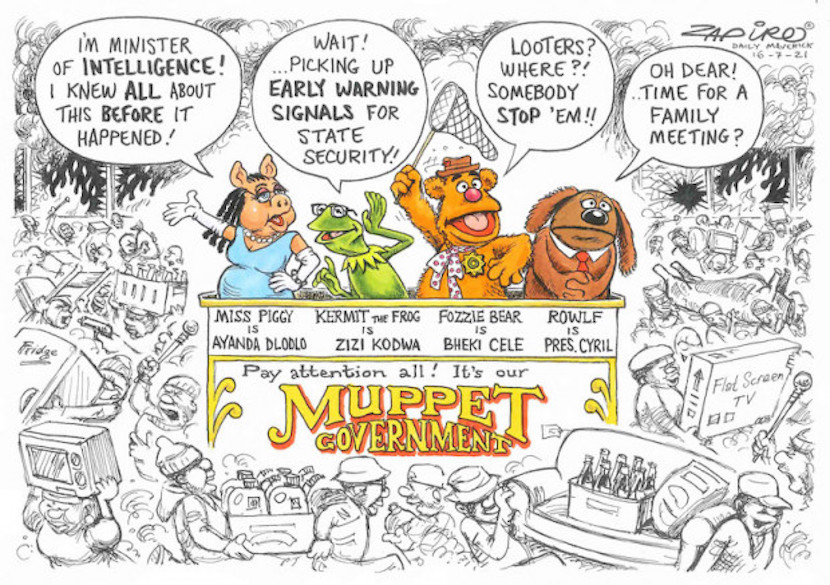 Good journalism has always been about relaying the stories of those who have experienced the news. But nowadays we are infested with agenda-driven opinions, many trotted out by well-intentioned youngsters who have barely entered the university of life. So it was a joy to receive this email from a reporter from the old school, former Sunday Times editor and publisher Brian Pottinger. He shared:

Thanks for GG Alcock’s timely piece. I knew his parents when I was a reporter on The Daily News and was devastated when Neil was assassinated, allegedly by stock-thieving policemen.

I pulled night shifts for a week at Ballito’s control points and that gives a lot of time for reflection. To me the biggest divide is between those communities that took responsibility for protecting their infrastructure and those who did not.

On Tuesday morning our hastily appointed security coordinator told us that all attempts to raise support from the police, army and ANC local structures had failed. We were on our own.

Within 24 hours we had a functioning Greater Ballito Operations Command, all the control points were manned, legally armed teams were on patrol, a first class communication system operating through a mobile phone app was in place and drones with infrared cameras were in the air. Pickets protected the mobile phone towers, electrical sub stations and water points. The next day stickers were issued to emergency and security personnel to facilitate their movements. By day three, armed convoys were bringing in essential food, medicines and fuel. When supplies did come through citizens lined up for hours in orderly lines to buy their 20 items from the supermarkets and R300’s worth of fuel. No panic. No moaning. And certainly no expectation anybody was going to help us. The line was held for the six days the State went AWOL.

Until we squarely address the critical moral decay in some of our communities that saw so many otherwise perfectly well set-up people prefer to join the looters rather than the barricades, we can make no progress. Talk of poverty is a diversion and Ramaphosa’s worthy pronouncements an irrelevance.

Steuart Pennington of SA – The Good News, who lives in Nottingham Road (one of the hardest-hit towns) offered this rational suggestion:

I enjoy reading the views of your various correspondents on the past week’s events. Talk of treason, insurrection, sedition, dark forces etc seem to be at the forefront of much of the thinking. Personally, I think the frustration that has built up over 27 years of indifferent, callous and incompetent service delivery is THE major factor. I have worked for many years in +/- 150 marginalised schools across a range of townships, the only change you see is massive houses built by overpaid mayors and uncaring government officials. Were it not for the 100 000 NGOs that operate in SA and very caring local communities the circumstances of most township dwellers and the state of township infrastructure would be considerably worse. I hope, in the aftermath of last week’s destruction, the Government realises that fixing incompetent local government has to be the major area of focus.

Thank you for the daily emails which I find informative. I would also like to comment on the events of the past week.

There is no doubt that what took place last week was economic sabotage and tantamount to an attempted Coup d’état and as such treasonous. We all accept the failures of the state which are glaring and the failure to accept accountability, always making excuses etc., we have  been subjected to that for the longest time.

I would like to bring another element that I see no one keen to address – an issue being avoided because it is so uncomfortable to many economic commentators, analysts and everybody else: It is the failure of the PRIVATE sector to fully participate in the economy of this country and come to the party, work with the state to build the country’s economy.

It is well known South Africa has two parallel economies, an issue that has been spoken about even during the former President Mbeki’s term. It looks to me there is a deliberate attempt to exclude some of our citizen to participate in the formal economy, there are always EXCUSES why they are not ready to participate like quality of education, regulatory regime, labour laws just to mention a few. Here’s my issue, even those who are specialists in their field today were not born with those skills, attributes etc., they were given opportunities to learn and prove themselves. The private sector is not welcoming to the inclusive economy.

Another issue that is uncomfortable is the issue of opportunities given to foreign nationals vs South African born citizens. I will not elaborate on this one, it’s a well-known factor.

For this country to work we all have to take some level of accountability and be honest with each other.

We close off today with email from community member Gerrit van den Dool who has a practical suggestion:

We are sitting (and have been for a long time) with a very unstable society where our police are not capable of handling it. They urgently need additional help.

And here we sit with an army ready to protect our borders! Surely it is time to reform them (or some) as a peace force. Then they can be trained and equipped to assist the police. I do not know how many soldiers there are but a number of 25 000 was mentioned.