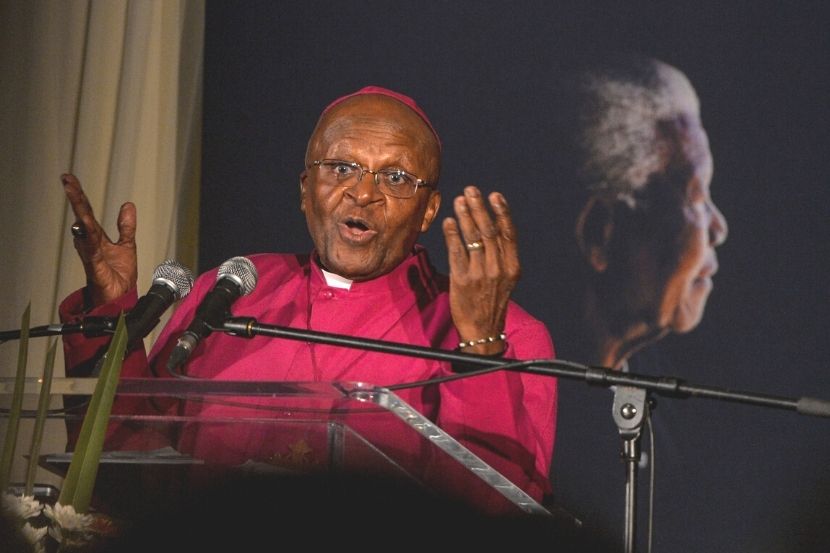 Archbishop Desmond Tutu fought tirelessly and fearlessly against the injustices of the Apartheid regime in South Africa. His passing today at age 90, confirmed by President Cyril Ramaphosa, warrants significant pause for reflection. South Africa, along with the rest of the world, has truly lost one of the most iconic moral giants of our time. Desmond Tutu, one of Nelson Mandela’s closest confidants, introduced Madiba to the world in 1994 as the first black President of South Africa. The Desmond and Leah Tutu Legacy Foundation pay tribute to Tutu in the piece below. – Nadya Swart

Revelling in his humanity, in both words and actions, Tutu showed fellow South Africans and people  across the world what a life lived in love looks like.

One of the world’s most respected spiritual and human rights leaders, Tutu was a living testament to  faith in action, insuppressible in his opposition against the evils of racism, oppression, intolerance,  and injustice not just during apartheid South Africa, but wherever in the world he saw moral wrongs,  especially impacting the most vulnerable and voiceless in society.

Every public action that he took was based in his deep Christian faith and his personification of  Ubuntu which gave his words and actions immense moral gravitas. Who can argue with love? The  apartheid government tried and failed.

Tutu and his wife resigned from their teaching careers in protest against the racist injustice of the  Bantu Education Act of 1953, a subjugating policy purposefully enacted to offer inferior education to  restrict non-white learners to menial occupations.

At the University of Fort Hare in the 1960s, as an Anglican chaplain, Tutu invited women students to  join their brothers as servers during the celebration of the Eucharist. At the time, it was a startling  decision that foreshadowed the church’s allowing the ordination of women priests, which Tutu was  instrumental in realising. As Archbishop of Cape Town in 1992, he ordained two of the first five  women to become Anglican priests in South Africa.

Whether on the pulpit or at the frontlines of the fight for justice and equality in apartheid South  Africa or within local churches urging shared vision, transformation, and reconciliation, Tutu  demonstrated his Ubuntu spirit. “One sees him move into parishes where there is such hostility, and  the gentleness, the compassion, his faith which is so deep, just emerges” observed an Anglican social  justice activist at the time.

Tutu’s position as an Anglican church leader combined with his passionate sense of justice and his  natural talents as a powerful communicator catapulted him to international renown. In his purple  cassock, Tutu became an instantly recognisable figure as he fearlessly spoke truth to power both  locally and globally.

Despite suffering disapproval from some, and harassment from others, for using his authority as  General Secretary of the SACC to condemn apartheid on religious and moral terms, Tutu continued  to use unequivocal words to shatter the deceptive pretences of apartheid.

In 1982, President PW Botha appointed a Government Commission under Judge Eloff to investigate  the SACC. He was hoping to put it, and Tutu, out of business. Instead, Tutu used his opening  statement before the commission to deliver a sweeping biblical and theological defence of the

church’s right to speak out and act for social justice: a devastating denunciation of apartheid. It was  a tour de force, leaving the largely theologically illiterate commissioners nonplussed.

In the end, after three years of investigations and hearings, they embarrassed President PW Botha  by finding no convincing evidence of wrong-doing and leaving the SACC unscathed.

Tutu also used his trademark fiery rhetoric to advocate for international sanctions against South  Africa – an offence under the apartheid government’s Terrorism Act, which mandated a minimum  five-year prison sentence. His courageous oratory earned him the hatred of white racists and the  adulation of majority black South Africans. It projected him to a position of the most prominent anti apartheid leader on the international stage, a position cemented when he was awarded the Nobel  Peace Prize in 1984.

In 1985, Tutu intervened to stop an angry crowd in Eastern Johannesburg as it tried to “necklace” a Duduza man suspected of assisting apartheid security forces. “Necklacing” is a form of mob violence  in which a crowd forces a tyre around a person’s neck and sets it alight.

“For a few tense moments, the 53-year-old Tutu, who won the Nobel Peace Prize last year … seemed to be in danger himself as the mob surged around the diminutive prelate in his purple cassock,” the Los Angeles Times reported.

When black political leaders were finally released from prison in 1990, Tutu left the political stage to  Nelson Mandela and others, while reserving and exercising the right to criticise politicians of any  stripe, including Mandela himself, for their failures to live up to his and their ideals. Always his ideals  were deeply embedded in faith, justice and ubuntu.

In a statement made years later, on behalf of the World Council of Churches, Tutu’s explained his  take on racism: “Racism is a sin. It is contrary to God’s will for love, peace, equality, justice, and  compassion for all. It is an affront to human dignity and a gross violation of human rights.” “Human dignity is God’s gift to all humankind. It is the gift of God’s image and likeness in every  human being. Racism desecrates God’s likeness in every person. Human rights are the protections  we give to human dignity. We participate in the human rights struggle to restore wholeness that has  been broken by racism. The struggle against racism, racial discrimination, xenophobia and related  intolerance is the struggle to sanctify and affirm life in all its fullness.”

As a mediator during the violence of South Africa’s difficult transition to democracy in the early  1990s, Tutu famously turned his focus to helping the country move towards healing and  reconciliation, pointing out that just as apartheid devastated the lives and psyches of black South  Africans, it also damaged souls of prejudiced white South Africans.

Tutu’s work culminated in being appointed by newly elected President Mandela to chair the Truth  and Reconciliation Commission (TRC) in 1995. For Tutu, the TRC meant confronting the truth of the  painful atrocities that had happened during apartheid, leading to a process of national healing.

“The raison d’être for this commission is opening wounds and cleansing them so that they do not  fester. And saying: we have dealt with our past as effectively as we could. We have not denied it. We  have looked the beast in the eye,” Tutu said in an interview with the BBC.

Tutu openly wept during the first day of the TRC hearings, in a moment that for many South Africans  brought home the reality of the trauma the country would have to work through. He later said that  he regretted the moment.

“I broke down on the very first day, but I then said it wasn’t fair because the media then  concentrated on me instead of the people who were the rightful victims. After that if I wanted to  cry, I cried at home or in church.”

“The central concern is not retribution or punishment,” Tutu said, “but in the spirit of Ubuntu, the  healing of breaches, the redressing of imbalances, the restoration of broken relationship”. The TRC  eventually granted amnesty to those prepared to confess their political crimes, and recommended  reparations for survivors of apartheid-era human rights abuses.

More than a decade later he called the work of the TRC “scandalously unfinished” after he and his  fellow TRC leaders recommended some 300 investigations into possible prosecutions coming from  evidence led at the TRC, which did not happen. It transpired that a secret deal had been made for an  informal blanket amnesty for perpetrators on both sides of the struggle against apartheid.

Once again, Tutu had put principle above political expediency in his outrage over the lack of  prosecutions. He warned that without reparations through full confession or through prosecution,  South Africans of any colour or creed would not be able to heal from their traumatic past.

Forgiveness, Tutu was always careful to explain, requires that the wrong is fearlessly addressed by  both sides, and that the necessity for restitution is honoured.

In 2007, President Mandela invited Tutu to be a founding member of “The Elders” along with former  U.S. President Jimmy Carter, retired UN Secretary-General Kofi Annan, and former Irish President  Mary Robinson. The Elders vision was close to Tutu’s heart: challenging injustice, resolving conflict,  and promoting ethical leadership. He was the first chair of the group. Annan called Tutu, “the  foremost moral authority of our time”.

Ostensibly retiring from public life on his 79th birthday, 7 October 2010, even in his sunset years Tutu  did not silence his lifetime legacy of speaking truth to power on a range of issues: corruption, illegal  arms deals, xenophobia, oppressed people in Palestine, Rohingya Muslims in Myanmar, respect for  rule of law, HIV/Aids, Rohingya Muslims in Myanmar and LGBTQI+ rights.

Tutu once famously remarked: “I wish I could shut up, but I can’t, and I won’t”. His Holiness the Dalai Lama said “Wherever there is abuse of human rights or people’s freedom is  being snatched away, be it Burma or Tibet,” of his dear friend, Tutu “he is always the first person to  speak against it. He works tirelessly for truth, honesty, and equality. He doesn’t see any differences”.

Tutu has been awarded numerous awards, the Gandhi Peace Prize in India; the Templeton Prize; the  Mo Ibrahim Prize for Achievement in African Leadership; is a member of the Order for Meritorious  Service, Gold (South Africa), a grand officer of the Légion d’Honneur (France), and an honorary  member of the Order of the Companions of Honour (UK); and has received the highest civilian  honour of the US from President Barack Obama, the Presidential Medal of Freedom. Tutu has also  been awarded more than 100 honorary doctorates by universities globally, including Harvard in the  United States and Oxford in the United Kingdom.

Most recently, Pope Francis named him, along with Martin Luther King Jr and Mahatma Gandhi, as  one of those who inspired his third encyclical, Fratelli Tutti, which (echoing one of Tutu’s key  messages) calls for human fraternity and solidarity.

Tutu was a healer at heart, an eternal optimist (a true “prisoner of hope”) and wry humourist.  He will be remembered for his powerful words in defence of the most vulnerable among us, his  infinite capacity for empathy, his quick wit, his infectious laugh, and his unfailing ability to turn  toward the light even during unbearably dark times.

Go well, dearest Arch. In you, the world has lost a force of reckoning. You will be deeply missed. May we always be guided by your prophetic vision for our country and for humanity:

“God calls on us to be his partners to work for a new kind of society where people count;  where people matter more than things, more than possessions; where human life is not just  respected but positively revered; where people will be secure and not suffer from the fear of  hunger, from ignorance, from disease; where there will be more gentleness, more caring,  more sharing, more compassion, more laughter; where there is peace and not war”.