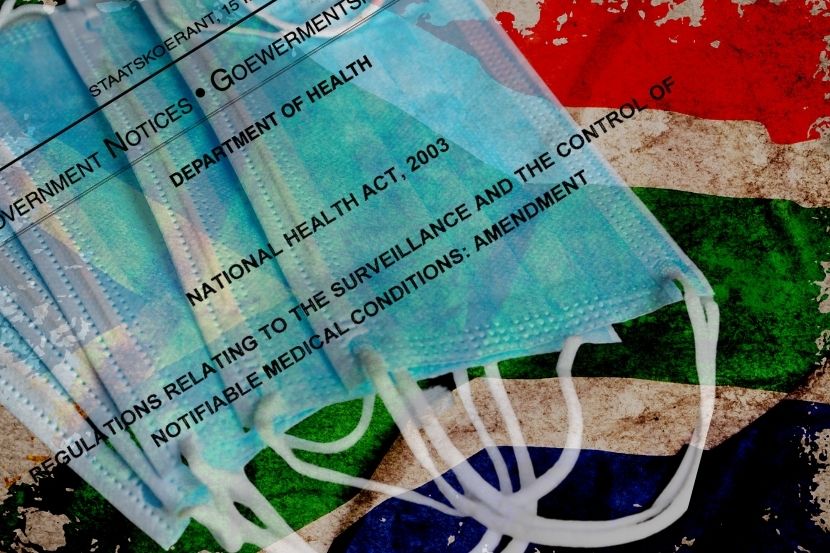 The last few monthly extensions of the National State of Disaster in South Africa were justified by saying that the government was in the process of finalising alternative legislation to manage Covid-19. Last Monday, after the country had been under various levels of lockdown for a total of 750 days, President Cyril Ramaphosa announced the termination of the National State of Disaster as “conditions no longer require that we remain in a National State of Disaster”. Any celebratory relief, however, is premature. On 14 March, Draft Health Regulations were published with the period for public comment set to lapse on 14 April 2022. After the government has considered the comments – a process which does not inspire any hope – the regulations will be finalised and promulgated. While they do not explicitly refer to Covid-19, the powers granted to government therein are highly ominous. For example, Regulation 15(1)(c)(iii) provides that: “A person who has been in contact with a person who is a carrier of a notifiable medical condition… may not refuse to submit to mandatory prophylaxis, treatment, isolation or quarantine…” Bear in mind that the Covid-19 vaccines fall under prophylaxis. The Draft Bill furthermore imposes regulations on events and gatherings that are sure to put pressure on companies and businesses to discriminate against those South Africans who are unvaccinated. The easing of lockdown restrictions and subsequent termination of the state of disaster have returned a semblance of normality to our lives, but the picture painted by these Draft Health Regulations is all but normal. This article first appeared on MedicalBrief. – Nadya Swart

All regulations and directions made in terms of SA’s Disaster Management Act after the declaration of the state of disaster in response to Covid-19 have been repealed with immediate effect, with the exception of a few “transitional measures”, but critics say the state’s “heavy hand” remains hovering.

MedicalBrief reports that 750 days after President Cyril Ramaphosa advised the nation that it would effectively be cut off from the rest of the world, he acknowledged that the powers granted to the government under disaster legislation “should be maintained only as long as they are absolutely necessary”. The priority now is “to rebuild our country even as this virus remains in our midst”, he said in a televised speech on Monday night (4 April).

The announcement means the pandemic will be managed by the National Health Act. Draft health regulations have been published for public comment and once the period for public comment closes on 16 April and the comments have been considered, the new regulations will be finalised and promulgated. However, critics have warned that the move is an attempt to maintain powers previously used under the state of disaster.

Ramaphosa said the move should give all South Africans the confidence to return to the lives they led before the pandemic, “with a few simple adjustments to protect those around us”.

“It should provide our businesses with certainty that they can operate and invest without the prospect of further restrictions,” he added. Ramaphosa was adamant that all the measures that were put in place have yielded positive results. These included preparing medical facilities to tackle the virus, getting millions of people vaccinated, rolling out the R350 social grant which helped thousands of unemployed people, and the relief fund, which assisted businesses during the pandemic.

Daily Maverick reports that the new [regulations] provide the government with a wide range of powers and have been criticised as “incoherent and illogical” by health experts and as an attempt to maintain powers previously used under the state of disaster. Solidarity CEO Dirk Hermann said “we will give our full input, but if the government proceeds with the regulations, we will test them in court”.

The DA said the state of disaster had reached a point where regulations and restrictions were unreasonable and irrational, as the threat had substantially declined with the newer variants. DA shadow minister of health Michéle Clarke urged Health Minister Joe Phaahla to withdraw the “irrational” regulations. “These regulations are not informed by the latest scientific evidence or expert opinions of various experts both here in South Africa and abroad,” she said.

Calls to finally end the National State of Disaster increased this year after the country experienced fewer hospitalisations and deaths during its fourth wave of Covid-19, driven by the Omicron variant. While lockdown restrictions have progressively eased and most aspects of life have returned to normal, the National State of Disaster has been criticised as unnecessary for reducing the impact of the pandemic, and a burden on the country’s economic recovery.

Trade union Solidarity launched legal action to challenge the ongoing National State of Disaster, but agreed to halt the action when Dlamini-Zuma announced the government’s intention to end the state of disaster by 5 April 2022. The DA had also approached the courts.

TimesLIVE reports that since the start of the pandemic, on the worst day, SA recorded more than 400 Covid-19 related deaths. This number has decreased significantly, with only 12 deaths recorded on the worst day last week. “While the pandemic is not over, these conditions no longer require that we stay in a state of national disaster,” Ramaphosa said.

The South African Liquor Brandowners Association (SALBA) welcomed the decision by Government to lift the National State of Disaster that was imposed two years ago on 27 March 2020.

However, SALBA is concerned that the government’s proposed alternative to deal with the pandemic through the regulations under the National Health Act of 2003 will introduce extraordinary measures taken under the State of Disaster into the “day to day” legal framework.

SALBA has made a formal submission to the Minister of Health on the regulations that are currently open for public consultation.

“The draft regulations attempt to replace the extraordinary regulations imposed by the State of Disaster (SOD) with legislation that is not applicable or appropriate to the ordinary day-to-day life in a post-pandemic world,” said SALBA CEO Kurt Moore.

Moore said that the regulations would afford a single Minister the right to limit the rights and freedoms of South African citizens and corporates without the full oversight of Parliament and further consultation with its citizens. The regulations grant the Minister of Health overreaching powers not envisaged in the National Health Act.

Moore said there is no reason given for the regulations to include sale, dispensing and consumption of alcohol as information that the Minister of Health may share with his Cabinet colleagues for purposes of the disease control.

The regulation of the sale of alcohol to consumers is a provincial competency that was suspended only under the National Disaster Act. SALBA believes that any interference in this area by the Health Minister or any member of the National Cabinet would be unconstitutional.

“The amendments provide no clarity on why the Minister of Heath requires regulations to share any information with his Cabinet colleagues, nor is there an indication of what purpose such information would be used for,” added Moore.

SALBA stated that the proposed regulations were not based on solid science. Although intended to cater to all notifiable diseases, they were drafted using outdated science and may not apply to the next pandemic. A scientist collective comprising Marc Mendelson, Shabir A Madhi, Jeremy Nel, Glenda Gray, Regina Osih and Francois Venter contended that the draft regulations were “inconsistent, incoherent, and illogical… firmly rooted in 2020 when knowledge about COVID-19 was more rudimentary”.

The scientists collective stated, “[the regulations are] not conducive for economic recovery and inappropriate to continue pursuing policies and imposing regulations aimed to prevent SARS-Cov-2 infections, as opposed to primarily focusing on enhancing population immunity through vaccination to prevent severe disease and death from Covid-19”.

SALBA expressed deep concern that the amendments would hold back the economic recovery and stifle growth.

“The State of Disaster’s lockdowns and restrictions on business activity caused irreparable damage to the economy. Businesses are struggling to recover from the previous restrictions, which seriously jeopardise viability and jobs. The initial liquor ban resulted in 118,435 jobs losses across the alcohol value chain, while the cumulative impact of the initial ban and second ban resulted in more than 165,000 jobs losses,” said Moore.

“The industry remains committed to playing a significant role in the nation’s economic recovery, alleviating poverty through job creation and encouraging business expansion. But we cannot do so if we are arbitrarily prevented from trading. Unfortunately, these amendments could result again in restrictions on our sector without proper consultation. Moreover, they will have the unintended consequences, which we have highlighted throughout the pandemic, that it results in jobs losses, losses to the fiscus and an increase in the illicit trade of alcohol,” said Moore.