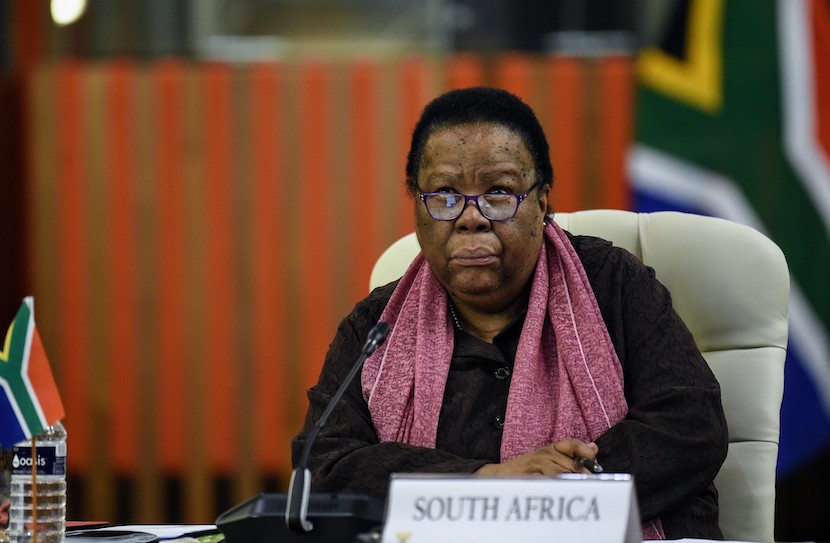 A recent speech by our minister of international relations and cooperation to Palestinian heads of mission in Africa has been received with stinging rebuke by South Africa’s Jewish Board of Deputies (SAJBD). In a statement, Minister Naledi Pandor has been accused of “yet another propaganda tirade against Israel” by the SAJBD’s national director Wendy Kahn. Pandor told the gathering that: “We [South Africa] will continue to support all efforts aimed at the establishment of a viable, contiguous Palestinian State, existing side-by-side in peace with Israel, within the internationally recognised 1967 borders, with East Jerusalem as its capital, in line with all relevant UN resolutions, and international law.” Pandor asked how many more reports were necessary from international watchdogs, singling out Israel for its “unfair treatment of Palestinians and pointed out that Israel is implementing apartheid?” Kahn, however, believes Pandor has complete disregard for anything that might contradict her view of the Palestinians as being no more than “blameless, suffering victims of the conflict”. The SAJBD even went so far as to label Pandor a “thorough-going bigot”. In the piece below, Ivo Vegter, writing for the Daily Friend, picks up on the notion that the ANC has turned the Israeli/Palestinian issue into an us-versus-them debate, while forgetting how much of its own history and struggle involved Jews and Zionists. Former ANC President Thabo Mbeki wrote in the foreword to Jonathan Ancer’s book Mensches In The Trenches that, “the Jewish community in South Africa played a disproportionately significant role in the struggle for liberation of the black oppressed, given that it was but a small fraction of the white population.” Vegter argues that it is in pursuance of the ANC’s Marxist class struggle that the party now believes it “owes its solidarity to the Palestinian people”. – Michael Appel

ANC forgets its many Jewish allies

Naledi Pandor recently repeated the myth that Israel is ‘committing crimes of Apartheid and persecution against Palestinians’. She forgets the many Jews, some of them Zionists, who fought alongside the ANC against apartheid.

In a speech to the Conference of Palestinian Heads of Mission in Africa at a luxury five-star hotel in Pretoria that overlooks the Union Buildings last week, the minister of international relations and cooperation, Naledi Pandor, conveyed her ‘warmest greetings and a message of friendship and solidarity to the Palestinian People’.

She deplored the African Union’s decision to grant Israel observer status, and elaborated at length on the ‘crimes of apartheid and persecution’ she believes Israel has committed against Palestinians.

Although she reaffirmed South Africa’s official support for a two-state solution, which at least has the merit of recognising Israel’s right to exist, she said nothing about the awkward fact that much of the Palestinian leadership remains openly committed to destroying the state of Israel and driving the Jews into the sea.

She displayed her bias by breathing not a word about Palestinian attacks on Israeli targets, primarily civilian, or about the fact that both Hamas, which governs the Gaza Strip, and the Palestinian Authority in the West Bank actively support or carry out terrorism directed at Israel.

Her beliefs are rooted in an age-old propaganda effort conducted by the then-Soviet Union, to cast the Palestinians not as the victims – and indeed perpetrators – of Arab wars of aggression, but as innocent victims of Israeli oppression.

In doing so, the Soviet bloc, which included African client states, convinced the United Nations (UN) to pass a resolution that declared Zionism, the movement that espouses the establishment of and support for a Jewish homeland in Palestine, to constitute racism. That resolution, number 3379 of 1975, was revoked in 1991 by a large majority of the UN General Assembly.

Historian Geoffrey Alderman makes a convincing case that it isn’t Zionism, but anti-Zionism, that is racist. He writes: ‘We can of course argue about the boundaries of the Jewish state that is now a member of the UN. We can certainly argue about the policies of the elected government of the Jewish state. But we cannot argue that the Jews – alone amongst the nationalities – are not entitled to a state, without inviting the description, “racist”, to apply to us.’

I have previously argued that Israel is not an apartheid state, both when local pro-Palestinian activists bullied Miss South Africa for participating in an event hosted in Israel, and when Amnesty International published a baleful report which reheated and served this old Soviet propaganda canard up on a fresh plate.

Not surprisingly, Pandor cited this report with approval in her speech, and she called for the UN to formally establish a committee on apartheid to impose this nomenclature upon Israel.

Her speech is anachronistic in a world where Israeli-Arab relations have seen dramatic improvements, and which has even seen the emergence of an Arab Zionism which supports the Jews and promotes the right of Israel to exist in Palestine.

In the simplistic analysis of Pandor (she is singled out here, but her views are widely shared by her colleagues in the ANC), the world still consists of oppressors and the oppressed, analogous to the Marxist class struggle.

In this narrow and bitter worldview, oppressed peoples of the world owe each other solidarity, which is why a liberation movement such as the ANC owes its solidarity to the Palestinian people.

The most obvious is that the Jewish people are themselves an oppressed people, having suffered greatly not only during the Holocaust, but both before and after it. They have been the victims of pogroms throughout the world, including the former Soviet bloc. They have been the targets of anti-semitic conspiracy theories in all countries where they have lived. They have been forcibly ejected, in the manner of ethnic cleansing, from most Muslim Arab nations. They continue to face virulent anti-Semitism today, not only from the far right, but also from the left from which Pandor’s anti-Israel narrative springs.

There’s a great deal of irony in this state of affairs, given how many of the white supporters of the anti-apartheid movement in South Africa were Jewish.

Journalist Jonathan Ancer has chronicled the stories of several dozen of the lesser-known Jewish heroes of the anti-apartheid resistance, in his cleverly titled and highly engaging book, Mensches in the Trenches.

Many of these Jews played a part in the struggle because they or their parents had experienced persecution under the Nazis in Germany. Some were inspired by the anti-Semitism they experienced at school in South Africa. These experiences meant they could relate to the oppression of black people in South Africa over nothing other than the colour of their skin.

They, as Thabo Mbeki wrote in the foreword, ‘were moved by an unshakable understanding that as human beings we must act together, regardless of colour, race or gender, to shape a common destiny’.

Among the 156 accused at the Treason Trial of 1956 to 1961, 23 where white. Of those, 16 were Jewish. All six of the white people arrested at Liliesleaf Farm, the underground headquarters of the ANC’s armed wing, were Jewish. Three of them ended up at the 1964 Rivonia Trial alongside Nelson Mandela. The defendants in these trials were represented by numerous Jewish attorneys and advocates, including Isie Maisels, Sydney Kentridge, Denis Kuny, Joel Joffe, Nat Levy and Arthur Chaskalson.

Many of the Jews in Ancer’s book were socialists or communists. Quite a few were Zionists. A significant number were liberals.

One, Franz Auerbach, a writer and educator, dedicated his life to non-racialism. He refused to be racially classified on his identity document, declaring himself to be a ‘human being’.

He wrote a book documenting that racial prejudice was actively taught in South African schools, which earned him the opprobrium of the nationalist press, the enmity of the apartheid regime, and the moniker the Poison Spider. He held many positions in his lifetime, among them president of the South African Institute of Race Relations.

Of him, Ancer wrote: ‘He was a liberal in the best sense of the word. He listened, thought and reflected; he was tolerant and open to hearing views that were different to his own – as long as they weren’t discriminatory.’

Rabbi Myer ‘Sonny’ Benjamin, a courageously outspoken anti-apartheid activist active in the struggle, was also closely involved with the IRR in the 1960s.

Isie Maisels, one of Mandela’s lawyers, was chairman of both the South African Jewish Board of Deputies and of the South African Zionist Federation. He is famous for being triumphantly hoisted on the shoulders of the 1956 Treason Trialists as they left the court, having all been acquitted.

Benjamin Pogrund, a journalist for the Rand Daily Mail who was arrested several times by the apartheid police for critical articles that embarrassed the regime, was a member of the Liberal Party, actively campaigned for non-racialism in the newsroom, and was ‘bitterly anti-Soviet and anti-Stalinist’.

He was inspired by the Zionist intellectual Leon Pinsker. This gave him a special empathy with black consciousness and African nationalism. When then-justice minister B.J. Vorster tried to recruit Pogrund for his strong anti-communist sentiments, he refused to have anything to do with protecting the apartheid government. Ironically, he would later be charged and given a suspended sentence under the Suppression of Communism Act.

Jock Isacowitz was a fascinating character who fought for freedom and equality in South Africa. During the second world war, he considered the Soviet Union to be on the side of the good guys against fascism. Influenced by Marxism, he joined the Communist Party and its anti-racist veterans’ organisation, the Springbok Legion.

The Holocaust changed his views. He began to question his anti-Zionist views and became a socialist Zionist. By the 1950s, he had become ever-more liberal, left the Communist Party, and co-founded the Torch Commando, a liberal ex-serviceman’s organisation that campaigned against the disenfranchisement of coloured people.

He fell in with an array of other liberals, notably Jack Unterhalter, Peter Brown, Alan Paton, Donald Molteno and Margaret Ballinger, and together they established the Liberal Party in 1953. Isacowitz was its vice-chairperson.

By this time he was anti-communist and pro-Zionist. In 1954, he became the first Liberal Party member to be banned. In the wake of the Sharpeville Massacre in 1960, he joined other liberation struggle leaders in prison, among them Joe Slovo, Rusty Bernstein, and Harold Wolpe.

Ancer’s book tells the fascinating stories of numerous other Jewish anti-apartheid figures who hid fugitives from the regime, defended activists in court, shuttled them between safe houses or into exile, openly defied apartheid laws both petty and grand, or quietly worked to improve the conditions of black people, mend racial relations in South Africa, and achieve a liberal constitutional democracy.

They all, liberal or communist, religious or secular, Zionist or not, played a role in shepherding the nation into a place where all citizens belonged, as Thabo Mbeki said of Arthur Chaskalson, the Jewish lawyer who secured Mandela 27 years in prison instead of a hanging, and who swore Mbeki into the office of president as chief justice in 1999.

It beggars belief that ANC officials can express solidarity with the Palestinian cause against the Jewish homeland, while ignoring their debt of loyalty to the Jewish mensches who played such an important and influential role in advancing the struggle and protecting its liberation activists.

Someone should send Naledi Pandor a copy of Ancer’s book.