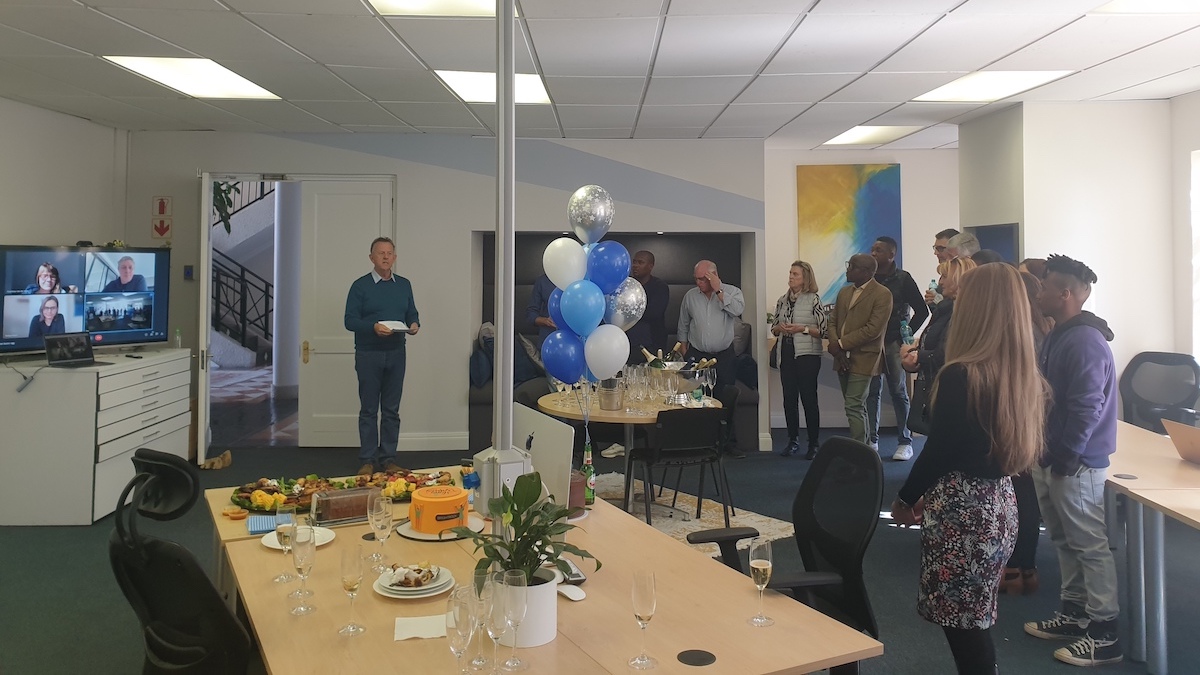 At BizNews, we love celebrating milestones. It gives us the opportunity to take a breath, reflect and be grateful for achievements that might otherwise be taken for granted.

Our website’s very first day was on the 5th August 2013. Like any new baby, it was nine months in gestation, having been conceived at the end of October 2012 when I was forced to abandon Moneyweb, a 15 year project that was supposed to have been my life’s work.

With hindsight, it was a blessing to have departed the publishing pioneer started above the garage of our Parkview home. Nothing matches the opportunity to work from a clean page.

The best address we could find was biznewz.biz. It took months and a sizeable investment to secure BizNews.com from Russian entrepreneurs who seem to specialise in this kind of trade.

My projections when we launched nine years ago today was that eventually we’d be able to entice 50,000 people a month to visit the website. Last month, Google tells us we had 371, 900 unique users visiting the site. A few times over the years when an article has gone viral, we’ve even cracked more than a million visitors in a month.

Impressive as those bald statistics appear to the untrained eye, they’re not really relevant. In our industry, the Holy Grail is engagement, loyalty and interaction with your community, the BizNews tribe as we call them.

Which brings me to a switch in our strategy that happened a mere six weeks ago, on June 23rd to be precise. Since then our fortunes have taken a huge turn for the better. The data doesn’t lie.

I have long been an admirer of SA’s world class strategy guru Tony Manning. He has offered forthright, honest, no bullshit advice over informal lunches – insights that have always made a difference. But with our 10th anniversary just over a year away, and lots of dilemmas on the table, we decided to make the investment of engaging Tony professionally.

In the past nine years there have been many forks in the BizNews road. But none, literally none, have been as critical as the switch we made as a result of Tony’s advice.

Without going into the details, he has prodded us back onto the road that gave us such incredible success. Tony explained – somewhat brutally as is occasionally his manner – that we were distracting our more important assets by loading them with non-productive responsibilities. In particular, myself, Michael Appel and Nadya Swart.

Within days we passed on our managerial responsibilities to the team of Jeanette, Stuart, Clive and Lucy – and were freed to focus on producing content. The result has been spectacular. Especially in the areas where we see a massive future – video and audio on demand.

Last month, our YouTube channel broke above 50, 000 subscribers, confirming its dominance as the leading South African business channel. We’re a quantum above the competitors – not just in the number of subscribers, but in engagement, measured by average views per video.

The total engagement numbers are even more exciting. In April, May and June, the BizNews TV channel posted a very respectable number of 1.5m engaged minutes for the month. By switching Mike, Nadya and I to focus on interviewing newsmakers, that number rocketed to 5.3m minutes in July.

The growth is also reflected in the reach. In April, BizNews TV had 73k unique viewers. That rose to 88k in May and broke 100k for the first time in June. Last month our content was viewed by 270,300 people. Quantifiable too, by YouTube, not the thumb sucks we’ve become used to from unmeasurable network television.

Podcasts are a poor cousin, number wise, but because of the direct engagement we regard this audio-on-demand vehicle as a critical area for our future growth. The switch in focus has seen an immediate impact, with BizNews Radio rising from 38k individual downloads in May and 50k in June, to 98.8k in July. The channel is now solidly in the Spotify SA Charts Top Ten of News and Politics podcasts, vying with Gareth Cliff for one of only two positions – we alternate between 8th and 9th – occupied by SA-made products.

There’s a similar story on the website, with BizNews.com’s engaged minutes rising from 500k in May and 560k in June, to more than 800k in July.

I share this detail only to make the point that while we have long believed in putting our community at the centre of our existence, sometimes we haven’t followed that through in the internal processes.

Having been reminded that our tribe doesn’t really care how many management meetings we have has made a huge difference. They love BizNews for its content. And that is something we will never forget. Again.