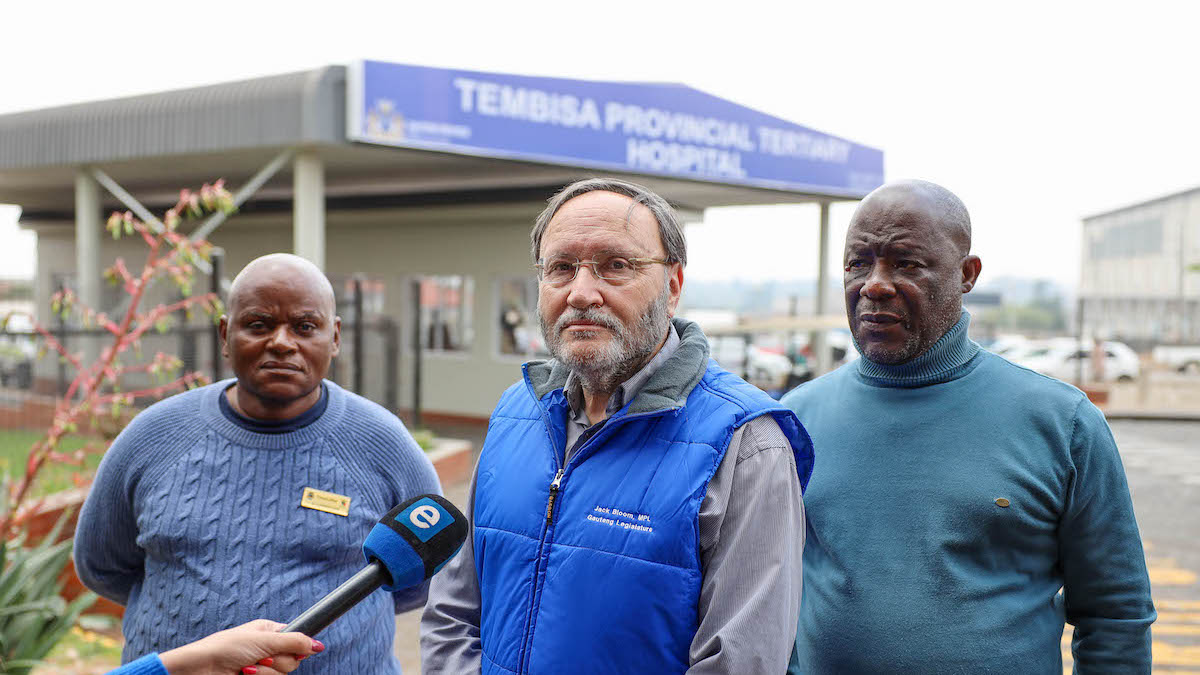 DA MPL Jack Bloom and two councillors visited Tembisa Hospital yesterday to investigate whether items reportedly bought for R1.5 million had actually been delivered. There were no “hand towels, armchairs or skinny jeans” on view – and the hospital management explained the lack of these items as “coding errors”. These three items were part of hundreds of payments totalling R850 million that murdered whistleblower Babita Deokaran flagged as “possibly fraudulent” – and Bloom says transparency in procurement is vital. The DA proposes that all hospital purchases should be on a public website so that irregularities can be picked up speedily by competing suppliers, to avoid further corruption and feeble excuses. – Sandra Laurence

There are no skinny jeans, cloth hand towels or leather armchairs at Tembisa Hospital – this is what I found when I visited this morning to check whether these items reportedly bought for R1.5 million had actually been delivered.

I was accompanied by local DA councillors Selby Thekiso and Philip Thamahane, and we met the hospital’s Acting CEO Dr Mohlamme Mathabathe and his management team.

We were informed that the hospital does not use cloth towels, only paper towels (see photo here).

There were no skinny jeans either. They said that “coding errors” were to blame. In the case of the towels the word “paper” was omitted, and monocryl sutures should have been coded, not skinny jeans. They said that the 100 armchairs could be found in the ICU and high care wards.

We then visited an ICU ward and were shown adjustable-height chairs without side-arms (see photo here). When I pointed out that these were definitely not the leather wingback armchairs that were recorded as being bought for R5,000 each, they again said it was a “coding error”. These three items were part of hundreds of payments totalling R850 million that murdered whistleblower Babita Deokaran flagged as “possibly fraudulent” as they went to fishy companies and were all under R500,000, which means they did not have to go out to tender and were signed off by the hospital CEO.

I was shocked that last year the hospital overspent its annual goods and services budget of R320 million by R734 million.

This year’s budget is still paying off the massive splurge of suspicious payments last year.

Meanwhile, the hospital has 849 official beds, but has squeezed in another 351 beds to treat 1,200 patients, with an overall budget of R1.7 billion, of which R1.2 billion is spent on personnel.

This highlights the need to spend the budget on needed items at the best price, instead of wasting money on unnecessary and over-priced goods. The hospital said they have tightened up on purchasing procedures, which I hope curbs the abuses of the past.

I am a great believer in transparency in this matter. As they say, “Sunlight is the best disinfectant”.

The DA proposes that all hospital purchases should be on a public website so that irregularities can be picked up speedily by competing suppliers. This will halt the feeble excuse of “coding errors”.