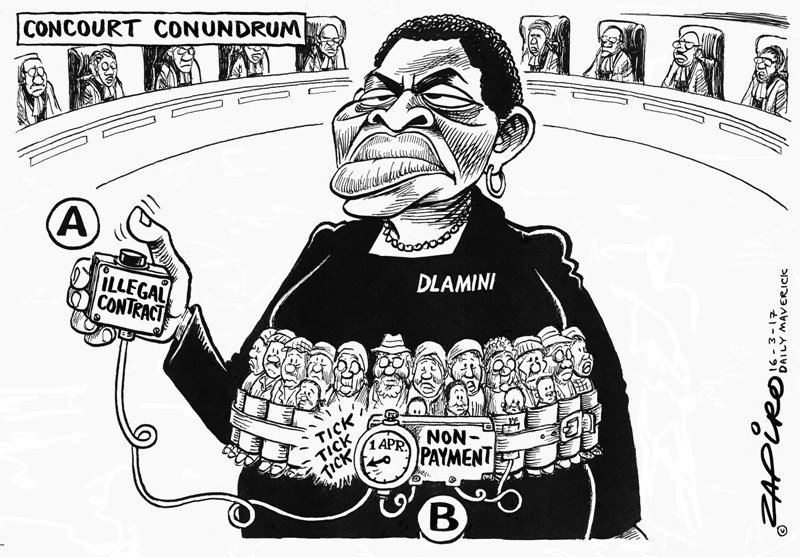 The Zuma administration seems set to take South Africa down with it, as the word accountability is not fathomed. Not a day after President Jacob Zuma stood up in Parliament and defended one of his henchmen Bathabile Dlamini, the Constitutional Court of South Africa slammed her handling of the social grants crisis. The Social Development Minister has also been put on supervision in managing the new agreement with Net1’s Cash Paymaster Services, which it has extended for another year. And in what the Constitutional Court calls the most deepening and shaming of ironies, the country now has to rely on a private entity with no discernible commitment to transformative empowerment to get out of the current predicament. This crisis is just another blotch on a Presidency that has put himself ahead of the people. And while the court has extended the contract for another year, one wonders if we’ll be in the same predicament next year. – Stuart Lowman

(Bloomberg) – South Africa’s Constitutional Court ordered the nation’s welfare agency to extend Net1 UEPS Technologies Inc.’s contract to distribute grants to more than 17 million beneficiaries for a year to avoid a “potential catastrophe” and slammed the government’s handling of the matter.

The ruling on Friday effectively ends the threat of an interruption to a signature program of the ruling African National Congress but leaves President Jacob Zuma’s administration with a stinging condemnation by the nation’s top court of its performance. Social Development Minister Bathabile Dlamini should explain before the end of the month why she shouldn’t pay the costs of the case in her personal capacity. The court said it would supervise the new agreement.

“This court and the whole country are now confronted with a situation where the executive arm of government admits that it is not able to fulfill its constitutional and statutory obligations to provide for the social assistance of its people,” Justice Johan Froneman said in the ruling. “And in the deepest and the most shaming of ironies, it now seeks to rely on a private corporate entity with no discernible commitment to transformative empowerment to get it out of this predicament.”

In the ruling, the court said the contract extension with Net1’s Cash Paymaster Services unit must continue on the same terms as the previous agreement that expires on March 31, although the company can ask the Treasury to review the pricing. CPS has a constitutional obligation to continue dispersing the monthly stipends, Froneman said.

The welfare payments system was on the brink of collapse after the South African Social Security Agency failed to find a new company to administer the program after the court declared the original contract with Net1 invalid more than two years ago.

Independent experts to be appointed.
Basically minister and #Sassa cannot be trusted to do anything.

“The court has basically said the minister and Sassa cannot be trusted to do what they are supposed to do and it is going to supervise the process to make sure they do their job in a very hand-on manner,” said Pierre de Vos, a law professor at the University of Cape Town. “It is an excellent judgment because in a way it saves the day and it tries to protect the country from the incompetence of the minister.”

The fiasco is the latest in a series of missteps by Zuma’s administration that have curbed growth, dented investor confidence and stoked conflict between government officials and departments. Zuma on Thursday rejected criticism of Dlamini, saying there is no crisis and that the payments will be made on April 1.

“We’d like to apologize for the anxiety and the fear that the people of South Africa, who are beneficiaries of the social grants, had to endure in the past few weeks,” she said.

South Africa, both #Ntlemeza and #SASSA rulings are the result of action taken by civil society orgs. Support them. Holding govt to account.

Human rights groups and opposition parties have accused Net1 of using information gathered on grant beneficiaries to sell services ranging from mobile-phone airtime to loans to some of South Africa’s poorest people without them always understanding what they were agreeing to. It has denied the allegations.

The court ruled that personal grants data must remain private and not be shared for the purpose of marketing goods and services.

“We dropped the ball, we apologize to the nation,” Sassa Chief Executive Officer Thokozani Magwaza told reporters outside the court.