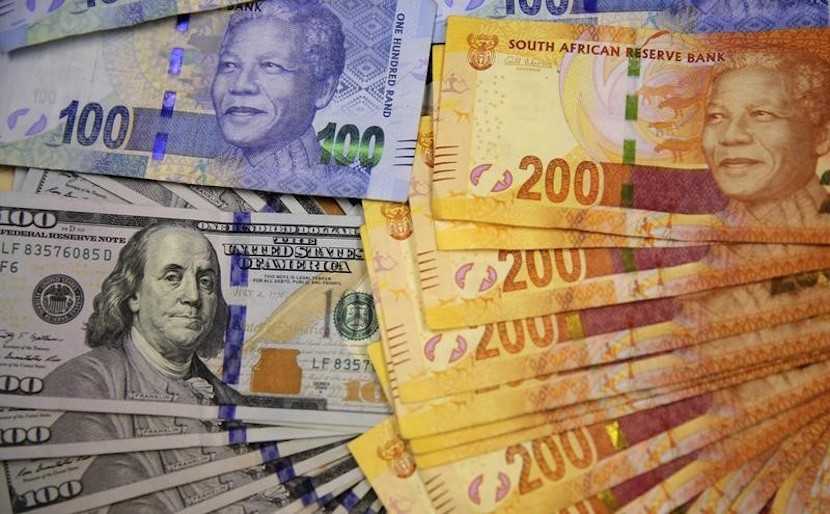 Perhaps it’s not surprising that the legal profession in South Africa is the wealthiest, given our penchant for litigation, with the richest pickings being among the political elite. This unpacking of the latest New World Wealth report by Econometrix Chief Azar Jammine, gives insight into our vastly richer compatriots. The proportion of dollar-millionaires who were white in South Africa dropped by 31.1% between 2007 and 2015. Their 86.2% share of wealth in 2007 dropped to 55.1% by 2015. That’s some dramatic wealth equalisation among the races (in the wealthiest classes). A full 3,000 South African High Net Worth Individuals (HNWIs), emigrated over the past 10 years. Among the top push factors? Load-shedding, crime, land redistribution without compensation and the possible nationalisation of healthcare. Last year (2018), there were 39,200 South African Dollar millionaires whose combined wealth totalled $275bn, or 42% of all personal wealth in the country. Why have this lot stayed? Lifestyle, good private schooling and healthcare, the English language, well-established luxury areas and top-class shopping centres. The financial services and real estate sectors account for almost half of all individual wealth. Another reason cited for sticking around was “excellent information available through the financial media”. Dare we take a bow for helping keep SA afloat? – Chris Bateman

However, over and above this, New World Wealth estimates that the country lost 3,000 HNWIs over the past decade through emigration and this must have also contributed towards the decline in South Africa’s Dollar millionaires. In light of continuous discussion about interracial inequality in South Africa, the breakdown of wealth by race would be seen as important.

Nonetheless, such figures are not provided in the latest Wealth report. Historically, however, one had observed that the proportion of Dollar millionaires who were White had decreased from 86.2% in 2007, to 68.6% in 2014 and 55.1% in 2015. In the opposite direction, the proportion of Black Africans rose from 5.4% in 2007, to 10.5% in 2014 and the proportion of Indians in this category had increased from 8.4% to 20.9% respectively. This suggests that during the course of the decade there was indeed a marked diminution in racial inequality of wealth, presumably on the back of a substantial number of BEE transactions, coupled with emigration of a few thousand wealthy Whites.

Lawyers, financiers and accountants lead in the wealth stakes in SA

To some extent unsurprisingly, one notes that lawyers account for easily the highest proportion of Dollar millionaires in South Africa, at 28% of the total. This is followed by 19% financiers and economists, 10% accountants and 7% in medicine and associated scientific professions. Computer science and IT follows at 5%, with engineering very poorly represented, at just 4% of the total. It is no wonder that one identifies a marked tendency for those qualifying in engineering and science professions to go into finance. It is also interesting to note that only 5% of Dollar millionaires did not have a university qualification and that as high a figure as 27% had a postgraduate qualification. More than two thirds of all Dollar millionaires had at least one degree, viz. 68% of the total.

The message from this is unequivocal: although not exclusively the path to wealth, higher education does play a significant role in enabling persons to acquire wealth. Indeed, some of the wealth of those without university qualifications might simply be a function of inheritance. More or less in correlation with these findings, the breakdown of Dollar millionaires by the sector in which they operate bears a close resemblance to that of type of millionaire by type of profession. Financial and professional services lead the way with 30% of millionaires, followed by real estate with 16%. Media and manufacturing are reflected well down on the list at below 4% of the total, together with transport and logistics and hotels and leisure. One suspects that IT and telecommunications will see their share of Dollar millionaires increasing in line with the 4 IR. In 2018, 9% of Dollar millionaires were in IT and telecommunications. 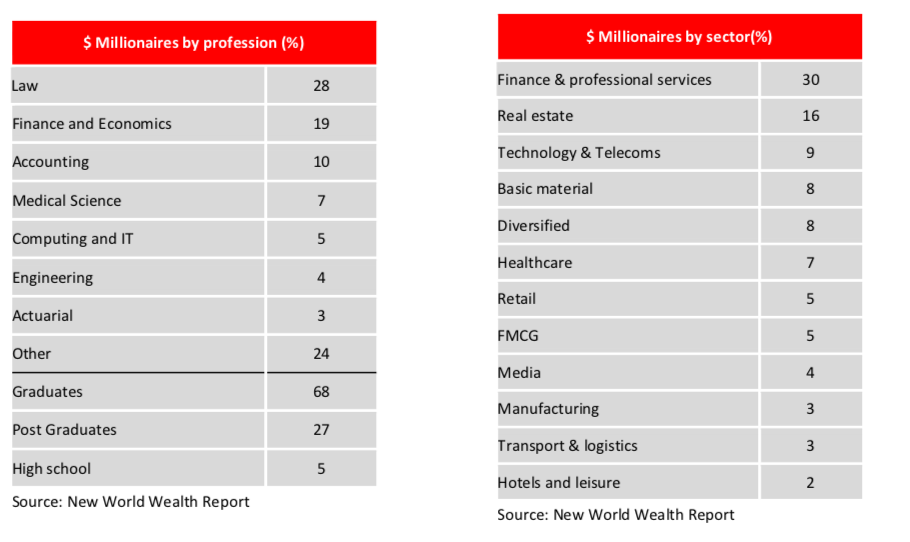 Several reasons for wanting to reside in SA 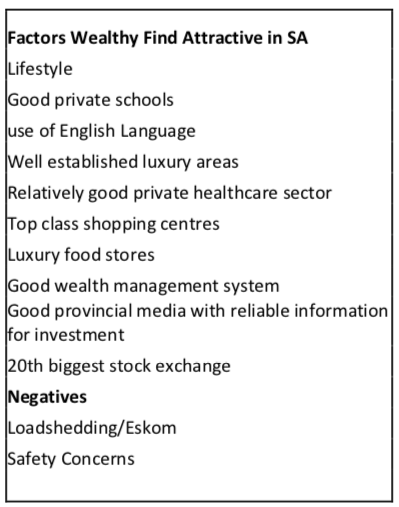 It is interesting to note the reasons outlined by Dollar millionaires for wanting to live in South Africa. Included is the lifestyle, high quality of private schools and private healthcare, use of the English language and the existence of well-established luxury areas, such as Camps Bay, Umhlanga and Sandton. The existence of top-class shopping centres and luxury food stores was also cited as making it attractive to live in South Africa.

A particularly significant aspect also reported on as being important is the “good wealth management system”. This can be taken in conjunction with the citing of good financial media with reliable information for investment as making it comfortable for wealthy persons to reside in South Africa, in the knowledge that there are favourable systems in place in the country to preserve wealth. This demonstrates confidence in the well-developed financial system of the country and the strength of the JSE. On the negative side, wealthy people see the following four issues as being deterrents to living in the country: load-shedding, criminal activity and the search for safety, fears of land expropriation without compensation and concerns about the potential impact of the nationalisation of healthcare in the retention of high quality health professionals. One notes the existence of nodes of HNWIs, with $248bn of the $649bn total private wealth in the country being in Johannesburg, $133bn in Cape Town, $54bn in Durban, Ballito and Umhlanga, $39bn in Paarl, Franschhoek and Stellenbosch, $39bn in Pretoria and $18bn on the Whale Coast.

The fastest growing area of wealth accumulation appears to have been in Durban, Ballito and Umhlanga, at 25% over the decade between 2008 and 2018.

Business interests have retained more or less the same share of total wealth, declining marginally from 20.4% in 2008, to 19.9%. Over and above these general areas of asset allocation, the other distinct feature has been an increase in exposure to foreign assets. In the case of foreign property, its share of wealth has risen from 1.2% in 2008, to 2.0% in 2018, for cash and bonds it has risen from 4.8% to 5.5% and most prominently, for foreign equities, it has risen from 6.6% to 9.7%. To some extent the latter is still surprisingly low given the ability of South Africans to hold as much as 30% of their wealth abroad. These trends are being projected to continue through the coming decade, with a forecast investment in alternatives rising to 8.5% by 2028 and in equities to 32.4%, whilst exposure to real estate is projected to decline further to 24.8% and foreign cash and bonds down to 14.1%.

In all these aspects, one needs to superimpose the findings derived from the mid-term population estimates that suggests that the proportion of elderly Whites, which is heavily overrepresented relative to its share of the total population in respect of older age groups, is bound to diminish over time as such persons die off. This is bound to diminish the number of HNWIs over time, with significant and probably negative implications for the country’s fiscus in terms of eroding the tax base still further. Emigration is likely to exacerbate this trend. 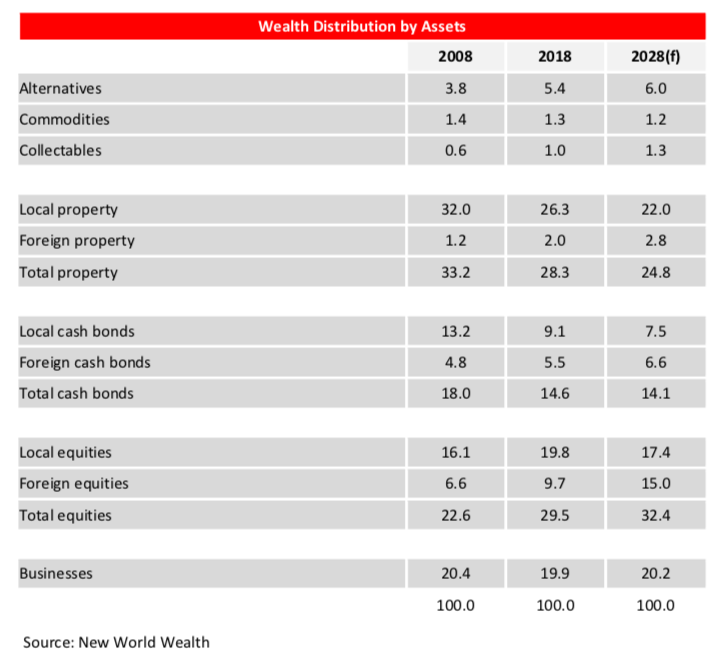