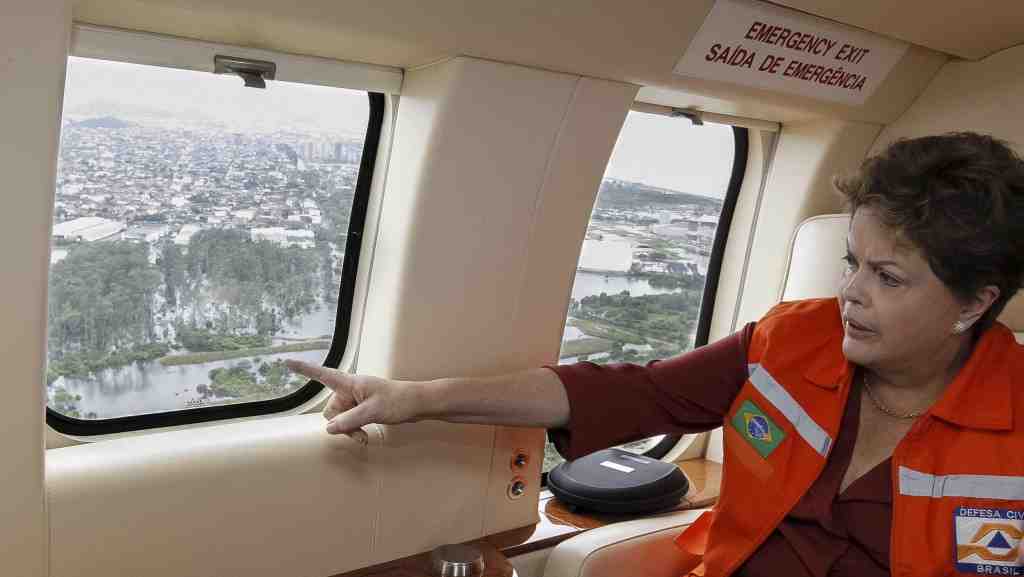 Brazilian President Dilma Rousseff has big Davos shoes to fill – her predecessor Lula da Silva was a star attraction at many World Economic Forum annual meetings. Apart from this being her maiden visit, Rousseff’s challenge is compounded by a perception that Brazil is botching its big opportunity (hosting the FIFA World Cup) and that the BRICS grouping is on the wane. Indeed, there is even a WEF session focusing on how BRICS can be rejuvenated. Perhaps she would be best to follow the example of SA President Jacob Zuma. On his first visit to Davos six years back, Zuma deflected potential criticism by avoiding the temptation to explain what he wanted or believed, but saying, rather,  he was “here to listen and learn.” Humility often succeeds where other methods fail. – AH

BRASILIA, Jan 20 (Reuters) – Brazil‘s leftist President Dilma Rousseff will try to convince the world’s business elite in Davos this week that her country is still a good investment despite three years of mediocre growth.

The one-time Marxist guerrilla has decided to reach out to the rich and powerful for the first time at the annual World Economic Forum in the Swiss ski resort of Davos to reassure them she is business-friendly and not fiscally profligate.

That is a big turnaround for a leader with a reputation for heavy-handed policies that have squeezed profits of some companies and hurt share prices. Dispelling skepticism about Brazil‘s future will be an uphill task as Rousseff plans to seek re-election in October.

“She will try to convince the international business community that she is more pragmatic than ideological, but no one really expects her government to make a huge effort to balance its fiscal policy in an election year,” said Ricardo Ribeiro, a political analyst at MCM consultancy in Sao Paulo.

The once-booming Brazilian economy grew just 1 percent in 2012, and capital outflows last year were the highest since 2002. Public spending is rising steadily and tax revenues have slowed due to weak growth and tax breaks aimed at stimulating industries, raising the risk of a credit downgrade this year.

Brazil is no longer the darling of Wall Street it was during the commodity-fueled expansion enjoyed by Rousseff’s predecessor and mentor, Luiz Inacio Lula da Silva, who, unlike Rousseff, was a regular fixture at Davos.

Business leaders blame Rousseff for cooling investor appetite for Brazil with her penchant for excessive government interference in the economy. Some “creative” accounting measures taken to meet savings targets also undermined the standing of her economic team, but Rousseff has resisted calls to replace Finance MinisterGuido Mantega.

His poor credibility among financial professionals has meant that the president herself has had to take on the task of assuring investors that her government will stick to fiscal discipline and keep inflation under control.

Mantega, who plans to join Rousseff in Davos, has seen his credibility crumble after he burned investors with frequent changes to tax rules, missed fiscal goals and overly optimistic growth predictions.

Presidential aides said Rousseff decided it was time for a personal visit to Davos so she could show investorsBrazil wants their business, explaining private concessions her government is granting to build roads, railways, airports and other badly needed infrastructure.

“Private investment is fundamental for Brazil and the president must show the country’s potential and listen to investors so the way we do things can be tweaked,” Neri told foreign media last week.

For the last decade, Brazil‘s ruling Workers’ Party has focused on reducing poverty and expanding domestic consumption, an engine of growth that has run out of steam. To recover momentum, Brazil now needs to raise investment sharply from the current 19 percent of GDP, less than half the rate of China.

Rousseff will speak publicly in Davos on Friday and later attend a fully booked private session with investors, economists and executives of top multinational companies.

The interest in the Brazilian leader is no surprise: She is widely favored to win a second term and decide the direction of the world’s seventh largest economy for another four years.

After Davos, Rousseff will travel to a regional summit in communist-run Cuba where she and Cuban PresidentRaul Castro will inaugurate a $900 million container terminal built in the port of Mariel by Odebrecht, one ofBrazil‘s biggest multinational conglomerates.

Mariel is expected to become a major Caribbean port when the U.S. trade embargo on Cuba is lifted one day.

Rousseff’s office stressed that Rousseff’s visit to Cuba was more business than politics. “This is not about leftist ideology. Brazil is positioning itself strategically by investing in post-Castro Cuba,” a presidential aide said.