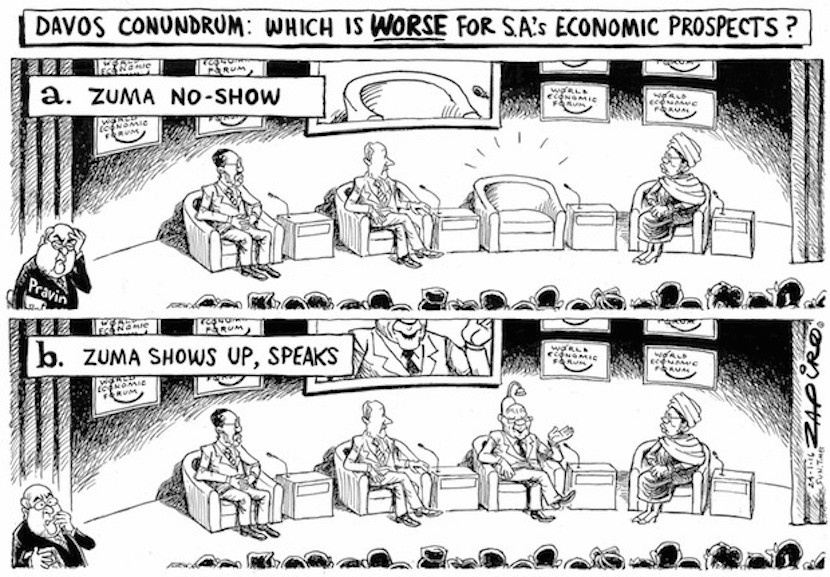 Just when you thought things couldn’t get any worse, they tend to do so.

SA President Jacob Zuma was billed as the star attraction for CNBC’s annual Davos highlight, its panel discussion on Africa. Given all that’s happened in the past six weeks, moderator Bronwyn Nielsen wasn’t the only one keen for answers to some pressing questions. She never got the chance.

Last night Zuma withdrew from the panel, offering his able and recently re-instated Finance Minister Pravin Gordhan instead. But that “downgrade” was unacceptable to the Ethiopian Prime Minister Hailemariam Desalegn who threatened to withdraw rather than share the stage with Gordhan. So, at the last minute, Rwanda’s third-term seeking President Paul Kagame was drafted into Zuma’s seat, placating the Ethiopian.

To further confuse matters, the Vice President of Nigeria,Yemi Osinbajo, arrived late only joining the discussions a third of the way through, the victim of a late arriving aircraft. Osinbajo was comfortably the most impressive of the otherwise lacklustre panellists, including some adept deflection of questions about how Nigeria will cope with a collapse in State revenues after a plunging oil price.

At least one of us in the audience was delighted to hear how Nigeria’s new Government is committed to fulfilling its pre-election ticket of fighting corruption by introducing highly transparent processes. I was similarly impressed with Osinbajo’s enlightened approach towards aggressively embracing technology to educate the continent’s most populous nation – committing to train 500 000 teachers in the next few months through distance learning and to use mobile phones as learners’ new chalkboards.

Zuma's office says he met Swedish PM Löfven, one of last socialists standing worldwide. So that's why he stood up Africa panel at #WEF16 ?

Overall, though, the thing that will stay with me is the number of empty seats in the audience (in past years it was standing room only with a lengthy queue outside). It might be that Africa is falling off the investment agenda. Or that those who booked to attend were primarily interested in seeing how Zuma answered the obvious questions.

Zuma’s no-show is the latest in what has been easily the most disappointing World Economic Forum annual meeting of the 13 I’ve attended. Those in the corridors who still pay attention to the country are asking difficult questions that only Zuma can answer like why did he fire Nene? Why appoint backbencher Van Rooyen? Why the obsession for a nuclear deal the country cannot afford? What will be done about the SAA chairman? And what plans are there to stop and hopefully reverse the economic slide.

@alechogg
I wonder if Zuma's "big man" psyche can handle Gordhan's plans. I fear his ego is going to make him do something stupid again.

It didn’t help that Zuma yesterday featured in a lengthy and highly critical article in one of Switzerland’s biggest newspapers – complete with an unflattering picture of him. That might also account for his invisibility thus far, despite heading a sizeable SA Government delegation that’s here.

He is scheduled to host a lunch today at the Kirchner Museum to essentially state the case for investing in the country. Unfortunately I will not be able to provide any feedback on the success or otherwise of that engagement. As with all the other official SA delegation events this year, my invitations appear to have gotten lost. It surely cannot be an attempt by the Zuma Administration to freeze out rather than engage its critics?