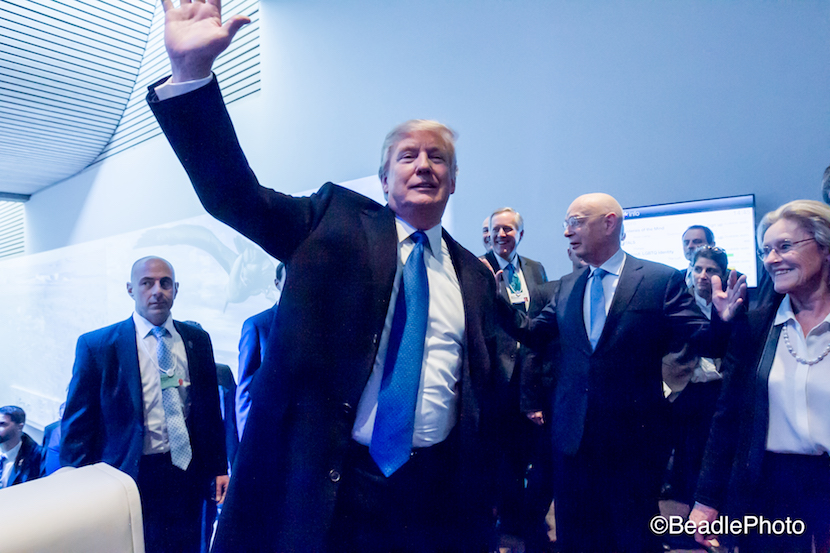 JOHANNESBURG — Despite what people may say about US president Donald Trump, there’s one thing he doesn’t seem to lack – stardom. Biznews founder Alec Hogg explains how the queues were six-seven deep when Trump walked through the corridors of WEF. But despite Trump’s show, it hasn’t taken anything away from the success of Team SA’s trip to Davos this year. Deputy president Cyril Ramaphosa and his team have revived the country’s torch, with many calling this his spring. This is Alec Hogg’s Davos Diary Day Four. – Stuart Lowman

Here we are with Davos Diary, Day Four. I’m standing on the spot where I had the first sighting of ‘The Donald’. It was an extraordinary event. There were people lined about six or seven deep all the way around, waiting for Donald Trump to come out of a meeting that he’d held downstairs in his first appearance at the World Economic Forum. He did come out. He waved like an emperor and it was like the Davos man was in awe of what this celebrity in their midst had done. It’s interesting because Cate Blanchett and Elton John are also here this year. They didn’t get anything like that kind of adulation or Rockstar treatment. It was interesting, just a few minutes ago, Al Gore – the great climate change man who was almost the President of the United States – walked along here with hardly anybody recognising him.

It just shows that whatever else he’s got, Donald Trump certainly has star quality. So too has Cyril Ramaphosa. He had a press conference today. He arrived a little late because he was caught up with other global leaders. It is very much Ramaphosa’s Davos as far as South Africans are concerned. He’s in great spirits. They rode back from the press conference on a golf cart and I asked him to slow down so I could take a photograph. We could see that he travels just like everybody else travels and he had the grace to smile and say, “Well, not all the time.” The President-in-waiting in South Africa has been a huge hit here at the World Economic Forum and no doubt, is taking back to South Africa lots of good news. At the press conference this morning we had news that the Team South Africa group had been inundated with requests from potential foreign investors into the country.

South Africa’s president-in-waiting Cyril Ramaphosa leaves the media centre at #wef18 on a golf cart – makes a change to see a global leader “roughing it” sans a phalanx of bodyguards. #lovechange

So the tide has certainly turned. Corruption is now very much in focus. The one thing I found surprising was that the South African delegation have come out very strongly on the point that they are going to hunt down the corrupt people and essentially, put them behind bars. No mercy. I guess that’s a signal to those potential whistle-blowers or those who were involved to step forward, give their information now, and become state’s witness before they too, get pulled into South Africa’s equivalent of ‘Operation Carwash’ – the famous Brazilian operation – where many of the politicians and leading businessmen are now actually sitting behind bars. South Africa’s Operation Carwash has begun. Cyril’s Spring, some people are calling it. However way you want to look at it, the reality is that the tide has turned.

This is Alec Hogg from the Congress Centre in Davos. So long.