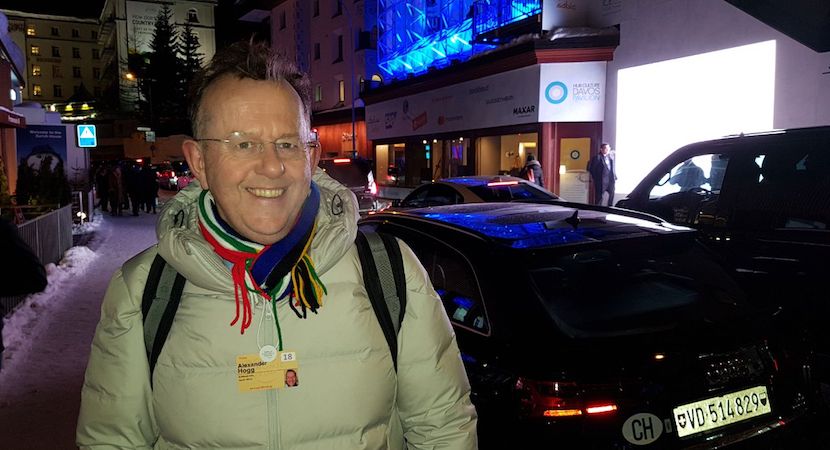 JOHANNESBURG — It was never going to be a flick of a switch to come back from 10 years of economic and political mismanagement and word from the Davos floor is supporting this theory. Highlighted by both Edelman’s and the IMF – showing how trust has been damaged and economic growth downgraded. But there is a sliver lining as newly elected ANC president Cyril Ramaphosa leads Team SA. But it’s not all serious, Alec Hogg lightens the mood as he tackles the town’s gridlock with his trusty Mooi River boots. This is the Davos Diary Day Two. – Stuart Lowman

This podcast was made possible by BrightRock, the company that introduced the first-ever needs-matched life insurance.

Davos Day Two and I’m actually standing in the queue here. Gareth has very kindly come out of the Belvedere Hotel. This is not one of the main queues in Davos. This is the Belvedere Hotel. So we’ve got an appointment with some people at 18h00 here, and it’s now about 17h50 and this just gives you a taste of what Davos is really about. As far as SA is concerned there’s lots of work to be done. I went to the Edelman’s Trust Barometer this morning and we are now at the bottom level. When they complained about Trump and how he’s damaged trust in America. They said, ‘American trust is now even worse than SAs.’ We didn’t ask him to say anything about SA. It just came up in the conversation.

The same thing yesterday with the IMF. I asked the Chief Economist what is the outlook now for SA, given you downgraded us again now that there’s political change? He said, ‘well, we’ll wait and see – we don’t need to make any changes yet.’ Those are the realities of what we’re having to deal with here at the WEF. The SA-Team – I met Cyril he came past, he stopped and shook my hand. I said, ‘it’s nice to see you here, thanks for working so hard, Mr Ramaphosa,’ and he had a broad smile. He looked a bit tired but I’m sure he’s going to be representing the country very well.

In the second part of Alec Hogg’s Davos Diary Day Two, he tries to understand the mindset of those willing to sit in gridlocked traffic, when walking makes more sense. He does however have the advantage of some home made Mooi River boots to tackle the black ice that most snow newbies know too well about. – Stuart Lowman

Well you’ve got to have a look at this. This is Davos on a Tuesday night round about 19h30 and, as you can see, who would want to be in a car at this time? Well what’s happened is that the snow has stopped, so we don’t have any more snow coming down, which is a blessing because it means that the Davos people can clear the streets and they certainly have been cleared but every man and his dog… Well not every man and his dog. The expensive men and their dogs have arrived. They have got their big vehicles, as you can see they’ve been driving them around to the various destinations that one gets in the hospitality and entertainment centre that is called the WEF Davos 2018, and they’re sitting in their cars. Why are they sitting in their cars? Well because it is much easier to walk but when you’re important you need a limo. Well it’s one of the things that completely fascinates me.

We could stand here probably for the next 20 minutes and I doubt that you will have much of a change and why do I say this? Well because last night when there were half as many cars around we went about 400m in about 30mins so if you can then just divide it. Twice as many cars, 200m in 30mins well, multiply it by how far we’ve gone since we’ve been on this video. This is one of the things about Davos that really does, I guess, challenge the super egos that tend to converge here in the last week of January every year, but for us it’s good old walking shoes. In fact, Gareth, show my ‘Mooi River’ boots. My friends from ‘Mooi River’ will be very impressed to see that they work just as well in the snow as the boots that come from Europe and we’ll be back, of course, covering the whole WEF. Not just a gridlock but everything else that happens over the next few days.

This podcast was made possible by BrightRock, the company that introduced the first-ever needs-matched life insurance.