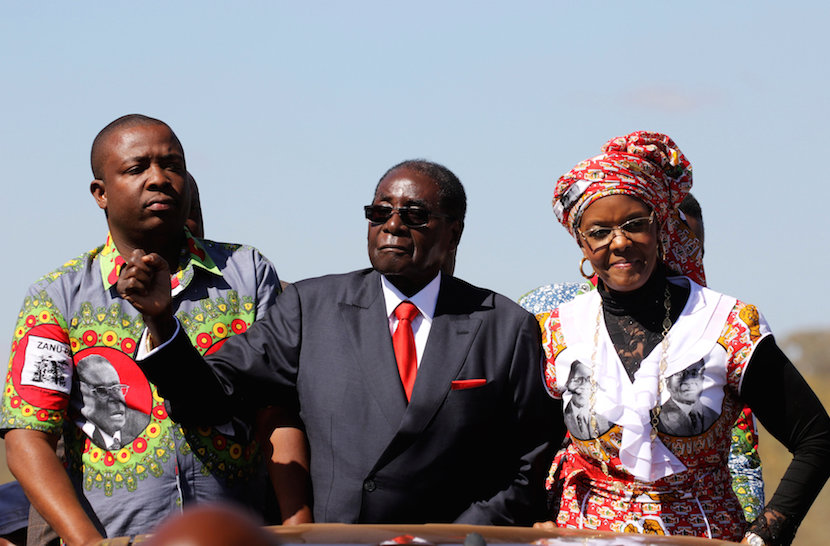 The migration south continues as there’s no let up in what was once the jewel in Africa’s crown. Robert Mugabe brought an end to British rule in 1980 but more than 30 years later, it’s a romance turned tragedy. The country is hit with one disaster after another, whether it’s man-made or natural, all a consequence of poor leadership. And if it’s not a drought seeing thousands faced with starvation, then it’s the current situation of no cash available. It’s gotten so bad that travel operators are asking guests to bring cash into the country because there is literally none available. The government will replace cash with bond notes, but as Cathy Buckle says, as a net importer, they’re just a worthless piece of paper that won’t buy anything. Another reason South Africans need to stand firm on the Constitution and not repeat bad history. Power corrupts. Absolute power corrupts absolutely. – Stuart Lowman

Outside it’s gorgeous this winter: the grass is tall and golden, the aloes ablaze with orange flowers and the sky is a bright, dazzling blue. Night time temperatures are down into single figures and in the early mornings mist hangs in the dips and valleys. It’s spectacular to see swirls of mist lying along rivers in the early mornings, mapping out the twists and turns of the water course leaving you feeling quite serene.

But then the day starts and the absurdity begins.

It’s only been a month since the government announced they were going to introduce a Zimbabwe Bond dollar to trade alongside the US dollar and it’s unbelievable how quickly the US dollar has disappeared. After trading freely with the US dollar for the last seven years no one can understand how all the money’s just suddenly disappeared. In less than a month daily withdrawal limits have gone from a thousand US dollars to five hundred, two hundred, one hundred and even less. Many days the banks have hundreds of people in the queues and they simply run out of money altogether and tell you to “try tomorrow” and at all the banks the ATM’s are empty.

Individuals, workers, managers: everyone’s been stuck in the same nightmare for the last month, having to spend hours every day in bank queues in order to draw out enough of their own money to keep up with daily expenses; hours when they should be working. The loss of revenue to companies, organizations and the country in the last month is unquantifiable.

Read also: SA’s future? The million Zimbabweans that marched against themselves.

‘Use plastic,’ government officials keep telling us but most people don’t have cash cards and those that do don’t often use them because the charges are so high. Paying monthly accounts in my home town this week was a nightmare: $3.50 to use a debit card to pay a $60 account; $3.00 to use a card to buy two small bags of groceries; $3.00 to use a card to buy a small packet of medicines. Then came the utilities and if you don’t laugh you’ll cry. The main ZESA (electricity) headquarters in the town don’t have any swipe machines so you have to pay in cash to buy top up vouchers to keep your power on. The Municipal Council offices in the town also don’t have swipe machines so you can’t pay for your water, rates and other services with plastic money there either. Time and again I found myself walking out of establishments empty handed.

This absurd situation spreads further. This week the British embassy updated their travel advice for Zimbabwe and wrote: “ it’s not currently possible to make cash withdrawals using an international bank card” in the country.

A leading safari company wrote on its website: “With the recent cash shortage in the country and the possible introduction of bond notes, our guests are advised to travel with cash in small denominations so as to avoid disappointment and unnecessary headaches.”

A REMINDER: It's politicians who destroyed #Zimbabwe's economy. https://t.co/fFnJUNAyWD

Then came the inevitable: the black market has resurfaced. An importer said for one US dollar in a physical bank note, you pay up to 1.07 in a bank transfer. “The dollar has an exchange rate against the dollar. How is that possible?” he said.

The chief economist with the Zimbabwe National Chamber of Commerce said: “The black market will worsen when bond notes begin to circulate,” Zimbabwe is a net importer and bond notes can’t be used to settle invoices abroad. With no cash in the banks, importers will be forced to look for greenbacks on the black market.”

As Zimbabweans struggle to cope with this latest crisis there is only one prevailing question: Where has all the money gone?