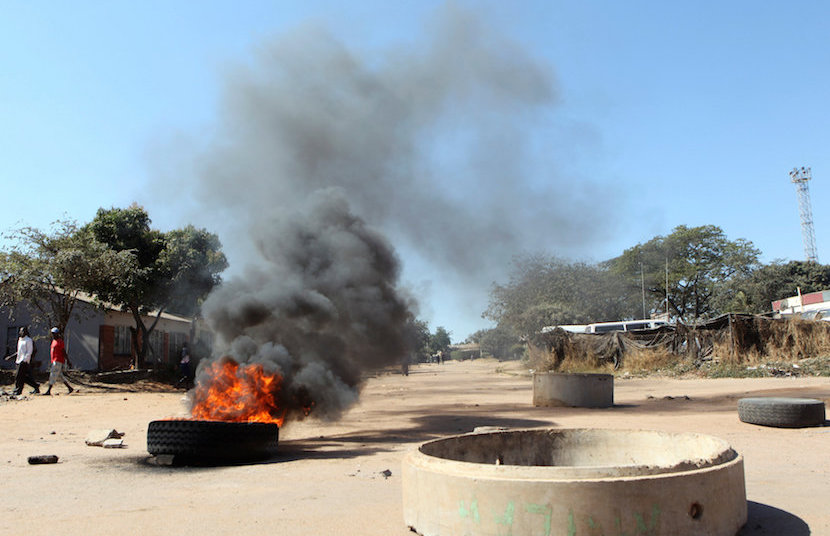 Power corrupts. But even in the most repressive of Regimes, cracks exist through which truth can shine, lighting up the gloom by exposing reality, stimulating hope. Zimbabwe’s worst unrest in almost a decade has had a predictable reaction from the State as it applies the force of tear gas, attack dogs and indiscriminate arrests against the power of a disgruntled people. While that might be contained through sheer numbers, those surrounding the country’s 92 year old President-for-Life have also identified social media as a potentially bigger threat. Yesterday the free texting tool WhatsApp was shut off for some hours. The Regime has now warned that anyone sending a text which could be interpreted as sedition will face arrest. Which shows that although Mugabe’s elite might have a fear of social media, they have little appreciation of how it really works. WhatsApp is the most secure, virtually unbreakable mass communication vehicle on the planet. Its users are aware of this which is why they use the tool in preference to SMSes or even phoning – both of which are accessible to those wanting to tap into private communication. So the latest scare tactics are likely to fall on mostly deaf ears. A better approach would have been to engage openly and honestly with those now driven to the last resort of the people in African dictatorships. But history shows such enlightened options don’t come easily to Regimes with Politburos. – Alec Hogg

Harare – Zimbabwe’s telecoms regulator has threatened to disconnect mobile subscribers it says are spreading information via WhatsApp about the protests that have rocked the country.

Public workers and other citizens called for job actions, stayaways and protests on Wednesday and Thursday via WhatsApp and other social messaging platforms.

However, there was an outage of WhatsApp early on Wednesday with accessibility to the service only restored later in the day.

The Posts and Telecommunications Regulatory Authority of Zimbabwe has now taken a swipe at those sharing and spreading information about the protests, saying they will be disconnected from mobile networks inside Zimbabwe.

“All SIM cards in Zimbabwe are registered in the name of the user. Perpetrators can easily be identified,” Potraz said in a public notice on Wednesday.

The notice further stated that “any person caught in possession of, generating, sharing or passing on abusive, threatening, subversive or offensive telecommunication messages, including WhatsApp or any other social media messages” will be arrested.

The Zimbabwe Govt has shut down Whatsapp and Facebook. But information wants to be free, and will always find a way.

Zimbabweans now have to be wary over arrest for any social media or telecom messages that “may be deemed to cause despondency, incite violence, threaten citizens and cause unrest,” according to the state telecom industry regulator.

Potraz said it had noted the irresponsible use of social media and mobile telecommunications services in the past few days.

Social media in Zimbabwe has splashed pictures of protests in Beitbridge and Harare over import restrictions and outrage in the public transport sector over police roadblocks.

Zimbabweans took to Twitter and other social media platforms on Wednesday to complain over the gagging of over the top services.

The government has previously hinted at moves to regulate usage of social media platforms in Zimbabwe, saying it would lean on technology from China.

This has however, been criticised, with campaigners saying this infringes on rights to the free flow and access of information.

Meanwhile, mobile companies in Zimbabwe have recorded surging revenues from internet usage via mobile platforms as voice revenues continue to slow down.

All of the country’s mobile operators, Econet Wireless, Telecel Zimbabwe and state controlled NetOne have bundle options for social media and internet access through smartphones and other mobile devices. – Fin24

HARARE, July 6 (Reuters) – Zimbabweans stayed at home on Wednesday and foreign banks and most businesses in the capital shut down, in one of the biggest protests against high unemployment, an acute cash shortage and corruption for nearly a decade.

Wednesday’s protest followed violent clashes between taxi drivers and police on Monday that led to the arrest of 95 people. It also coincided with a strike by doctors, teachers and nurses whose salaries had been delayed.

A devastating drought has compounded economic hardships including high joblessness while an acute cash shortage has angered Zimbabwe’s citizens.

Only in Zimbabwe
Cops warn motorists that if found with a stone, yes a stone, in your car you will be arrested. Trying to deal with protests

In a story quoting John Mangudya, the governor of Zimbabwe’s central bank, the Financial Times reported on Wednesday that the African Export-Import Bank was arranging a seven-year loan of $986 million so Zimbabwe could pay back arrears to the World Bank.

The FT quoted Mangudya as saying Zimbabwe hoped to pay off its arrears before the September board meetings of the International Monetary Fund and the African Development Bank, paving the way for IMF assistance to alleviate its cash crunch.

Afreximbank and IMF officials could not immediately be reached for comment.

The 39-year-old Mawarire started the #ThisFlag campaign in April to protest against corruption, injustice and poverty.

The campaign has attracted thousands of followers who have been speaking out against government excesses. Wednesday’s protest was organised via Twitter, Facebook and WhatsApp.

Mawarire’s campaign includes a series of demands: for Mugabe to fire and prosecute “known” corrupt ministers, for government salaries to be paid on time and for police to remove roadblocks which most people say are posts for bribe taking officers.

“The ball is in your court,” Mawarire said on his Facebook page. We are ready to close down again and this time we will add another day, Wednesday and Thursday. We are not playing and we ask you to take us seriously.”

Mugabe’s spokesman, George Charamba, was not available to comment.

State telecoms regulator POTRAZ said in a statement it would arrest people sending “subversive” messages that cause unrest.

Mugabe, who has held power since Zimbabwe gained independence from Britain in 1980, was attending a scheduled meeting on Wednesday of his party ZANU-PF’s politburo, the party’s top executive organ. Party spokesman Simon Khaya-Moyo declined to say whether ZANU-PF would discuss the protests.

In the volatile township of Mufakose, to the west of Harare, hundreds of youths barricaded roads to keep people from going to work, Reuters witnesses said.

More than 40 people were arrested across Zimbabwe for blocking roads and disturbing the peace, said Charity Charamba, a police spokeswoman. Among them was a Belgian tourist held in the resort town of Victoria for unlawful protests, she said, correcting her earlier statement that an Australian had been detained.

There was no need to call out the military, Charamba said.

“The military is not there because in our assessment, for now, the situation has not deteriorated (enough) to warrant the presence of the military,” Charamba told reporters.

Siyaso, one of the biggest and oldest informal markets in Mbare township near central Harare, was also shut down. Few vehicles were on the roads of the capital. Supermarkets like Pick’n’Pay, Ok Zimbabwe and Choppies reported little business. Government departments were open.

Local private media said Zimbabweans in other major cities had also stayed at home, with most businesses closed. Zimbabwe last witnessed such a protest in April 2007.