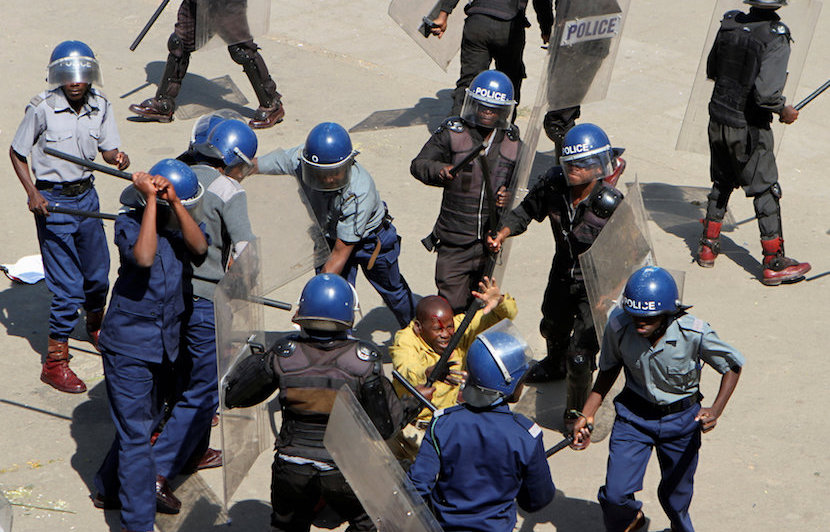 A picture tells more than a thousand words, and Cathy Buckle reflects on three. All highlighting an increased form of brutality in Zimbabwe as the government defends President-For-Life Robert Mugabe. Buckle says the protests are springing up like wild flowers after a bush fire. And government is using all methods at its disposal, also entering the 21st century as a new bill seeks to criminalise online hostile behaviour. The power of social media has already reared its head in Tunisia, and while Zimbabwe seeks change, Africa doesn’t need a repeat. – Stuart Lowman

Returning to Zimbabwe after a short time away, it doesn’t take long to know you’re home after landing at Harare International Airport. First it’s the colours: the golden grass, the hints of red spring leaves in the Musasa woodland, the red rust on roofs of the airforce buildings, the green grass creeping into the tarmac all along the runway. Beauty and the beast: nature and neglect by side.

Wide-eyed you can do nothing but wait and watch the frenzied scramble by passengers to get off the plane first; the perfect opportunity to appreciate the warm sun on your face and the startling blueness of the Zimbabwean sky; you begin to feel alive again!

It takes nearly an hour to emerge from the slow, long-winded process of immigration and baggage scanning, all overseen by a portrait of President Mugabe taken many, many years ago. The feeling of big brother watching you is already evident and surreal images of everyday life in Zimbabwe are waiting to bombard the senses. On the main airport road huge billboards show pictures of President Mugabe and his Chinese counterpart smiling and shaking hands and underneath are the words: China our all weather friend.

Following events in Zimbabwe from outside the country gives you a hint of what’s happening but it’s not the same as being here in person and experiencing what ordinary people have to deal with every day. Banks without money; a corrupt, bloated government; companies collapsing every month; workers being laid off or forced to take pay cuts; the pending introduction of a made up currency called Bond notes which will be as exchangeable and trade-able as Monopoly money. Over and above everything else however, is the fierce brutality against ordinary people by men in uniform wielding truncheons.

There are three images this week that speak volumes to the state of our beleaguered nation. One is of unarmed protester and activist, Stan Zvorwadza holding up flowers to a dozen riot police all of whom are holding truncheons and shields. The second is of an unarmed protester lying on the ground, his hands up in surrender, ringed by men in police uniform beating him with truncheons. The third image is of activist Patson Dzamara, a Zimbabwe flag around his neck, holding the hand of a protestor whose head and shirt are covered in blood, leading him to safety and medical help. Words fail you when you see these pictures; such brutality poised against such bravery.

Always remember violence is the bane of ZANU pf's survival.

Tragically we’ve been seeing images like this repeatedly for more than 15 years now: protestors and democracy seekers brutalized, beaten, bleeding. We remember their faces and names too and their huge personal sacrifice for the love of our country will never be forgotten. Zimbabwe’s protests are sprouting like wild flowers after a bush fire, breathing life into a new surge of patriotism.

Is Patson Dzamara the new face of #ThisFlag? If so then he is a more confrontational face. The movement has changed gears.

Responding to the protests and the massive flow of information and communication on social media, the Zimbabwe government say they are to introduce a “Computer Crime and Cybercrime Bill “which will criminalize “hostile behaviour” using a computer or electronic devices. According to the state controlled Herald newspaper: ”The proposed law comes against the backdrop of some Zimbabweans locally and abroad who are using the Internet to communicate subversive material which seeks to unconstitutionally remove Government through violence.”

It seems our government have forgotten that Zimbabwe in 2016 is very different from Zimbabwe in 2008 when a sim card for a mobile phone cost US$100 on the black market and only a select few had smart phones. Now everyone’s got a smart phone and every smart phone’s got a 3G internet connection and everyone, everywhere is buying data bundles on the side of the road to use WhatsApp, Twitter, Skype and
Facebook.

I end this week with news that my new book, “Rundi,” about my experiences hand rearing baby elephants at the Mukuvisi Woodlands in Harare in the mid 1980’s, is now available. It was a time before email, internet or mobile phones and gives a completely different picture of life in Zimbabwe.