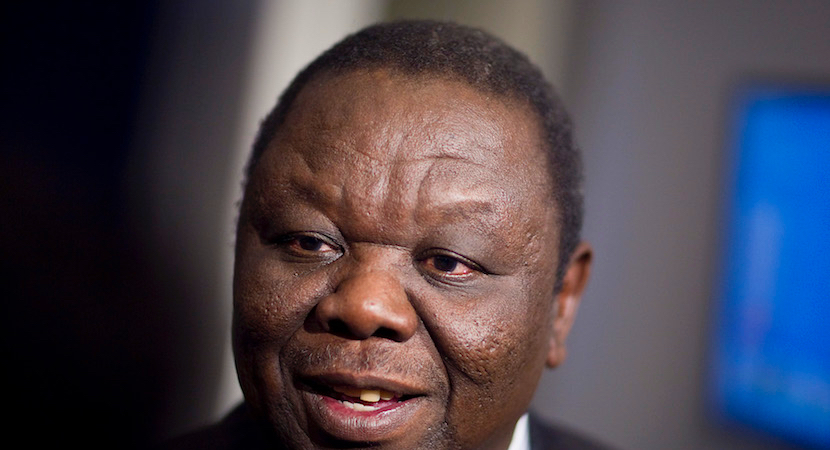 JOHANNESBURG — It’s tragic that Zimbabwean opposition leader Morgan Tsvangirai won’t get to see further changes in his country and the region. It’s almost poignant that he passed away on a dramatic night in which Jacob Zuma stood down as South African president. Tsvangirai fought hard for freedom in Zimbabwe and the rise of opposition politics in the region. His work has inspired countless others. And hopefully, we’re now starting to see the beginning of a Southern African Spring. – Gareth van Zyl

(Bloomberg) – Morgan Tsvangirai, who led Zimbabwe’s main opposition party for almost two decades and failed to unseat Robert Mugabe as president in several elections that were marred by allegations of violence and rigging, has died. He was 65.

Tsvangirai, who has been battling cancer, died on Wednesday, the opposition Movement for Democratic Change’s vice president, Elias Mudzuri, said by phone.

A former labor union leader, Tsvangirai helped found the MDC in 1999, the first party since independence in 1980 to pose a major threat to the rule of Mugabe’s Zimbabwe African National Union-Patriotic Front. While the MDC won control of Harare, the capital, and other urban areas where Tsvangirai was wildly popular, the security forces helped Mugabe cling to power. Mugabe finally quit in November 2017 after the military seized control of the country and his own party threatened to impeach him.

The MDC nominated Tsvangirai to run against Emmerson Mnangagwa, who Zanu-PF chose to succeed Mugabe, in presidential elections scheduled for 2018. He indicated on Jan. 8 that he was considering bowing out of the race after undergoing treatment for colon cancer, saying it was time to place the party in “new hands.”

Morgan Richard Tsvangirai was born on March 10, 1952, in the southern district of Gutu, the son of a bricklayer father and a mother who was a subsistence farmer. He first worked as a plant operator at Trojan Nickel Mine in the northern town of Bindura and entered union politics, becoming the Zimbabwe Congress of Trade Unions secretary-general in 1989.

Tsvangirai joined forces with other labor and civil-rights leaders in 1999 to form the MDC, as opposition grew to Mugabe’s increasingly authoritarian leadership and mismanagement of the economy. The MDC won its first political battle in a 2000 referendum, when it defeated constitutional changes that Tsvangirai said would have entrenched Mugabe’s rule.

Deeply saddened at the passing of #MorganTsvangirai. A man who should have been President of Zimbabwe but decided to put his country first. An inspiration to all patriots. He will be sadly missed. RIP

After the loss, government-backed militants embarked on the seizure of thousands of white-owned farms and evicted about 3 million people, mainly farmworkers of Malawian, Zambian and Mozambican descent, according to the United Nations.

The referendum marked the beginning of Zimbabwe’s “lost decade,” a term coined by University of Zimbabwe political science professor John Makumbe, who died in January 2013. Agricultural output and exports plunged, the economy entered a recession and hyperinflation set in, eventually forcing the government to scrap the use of the Zimbabwe dollar.

Mugabe was declared the winner of the 2000 elections, which most observers rejected as flawed because of widespread violence mainly directed against MDC supporters. In 2003, Tsvangirai was arrested after the police accused him of calling for violence. He was detained again the following year, when he faced treason charges that were dismissed by the High Court, and in March 2007, when he was badly beaten.

Elections held in June 2008 saw the MDC win control of Zimbabwe’s parliament from Zanu-PF for the first time. While Tsvangirai led the presidential ballot, he failed to garner the 50 percent plus one vote needed to avoid a run-off. He withdrew from the second vote, citing the deaths of about 200 MDC supporters and activists, a move that plunged the country into political crisis.

Mediation by the Southern African Development Community, a regional trading bloc, resulted in a coalition government in Feb. 2009, that left Mugabe as president and with Tsvangirai as prime minister. Zanu-PF kept control of the security ministries, while the MDC controlled economic and social ministries.

The agreement, which helped stabilized the economy, remained in place until 2013 when fresh elections were held and Mugabe regained outright control. Once again, the opposition rejected the results, alleging rigging and human rights abuses.

Mugabe’s ultimate downfall came at the hands of the security forces and his own party that had kept him in power for 37 years, rather than the opposition, after he backed his wife, Grace, in the battle to succeed him. Mnangagwa fled into exile after being fired as Mugabe’s deputy, returning to take over the presidency when his allies in the military seized control of the country.

Tsvangirai was the father of eight children. His first wife, Susan, died in a car crash in 2009. He married his second wife, Elizabeth, in 2012.