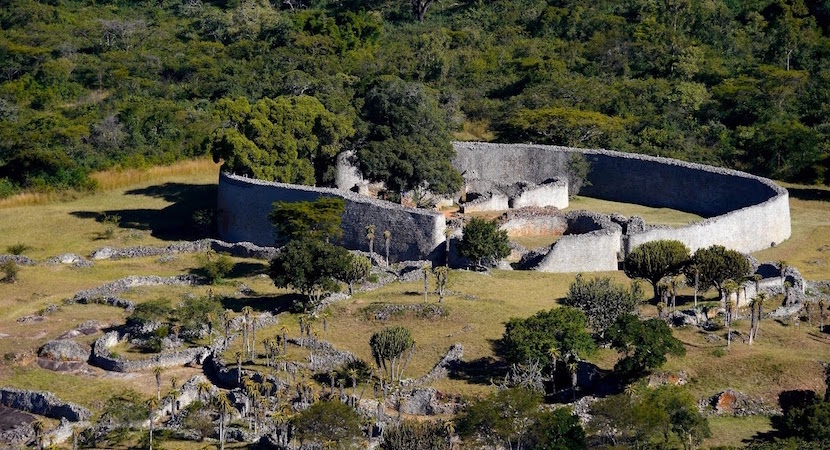 LONDON — In this episode we get a timeous reminder of how powerful people are sometimes able to distort history to serve their own ends. For decades, a myth was propagated around Great Zimbabwe, the massive ancient city structure near Masvingo, 280km east of Bulawayo.  The whitewashing is laid bare in this superb report by Rebecca Kesby of the BBC World Service. – Alec Hogg

This is the Rational Perspective, I’m Alec Hogg. In this episode the whitewashing of Zimbabwe’s ancient history. In the early 1970s, when I was 12 years old, my British immigrant father married a South African. Part of his integration was visiting her siblings, one of whom lived with his family in, what was then called, Fort Victoria, part of recently independent Rhodesia. Beyond seeing television for the first time and marvelling at how people there drove Peugeots, because of their reliability. The thing I remember most was a visit to the place that the whites called ‘The Zimbabwe Ruins.’ Its symbol, the powerful Zimbabwe bird, made a deep and lasting impression. A replica dominates the mantelpiece in my office here, in London, a permanent reminder of the Continent, which will forever own my heart.

I remember my newly minted uncle explaining how great Zimbabwe’s impressive structures had been built by some ancient civilisation that had mysteriously departed. It was a story that suited the propaganda of the time but was so absolutely, and completely wrong. We discover that in this superb podcast by Rebecca Kesby of the BBC World Service. The program is part of the BBC’s excellent Witness Podcast, one of my favourite subscriptions.

Hello, and welcome to Witness, the history program from the BBC World Service with me, Rebecca Kesby, and today we head to Zimbabwe in the early 1980s, after independence from the white minority rule. The country was redefining itself and looking to its ancient past for inspiration but history can be a contentious issue.

It was a great moment for us and we thought the world was at our feet, and it was. I was responsible, so I was right in the centre of these exciting moments.

In 1982 Dr Kenneth Mufuka was appointed the first black director of museums in Zimbabwe. He had studied in Scotland and America but when he returned home, as part of his new role, he was given a specific task – to rewrite the history of one of Africa’s most important archaeological treasures, the ‘Great Zimbabwe Ruins.’

These are the corridors of power of an ancient African civilisation, once the flourishing capital of a great Shona kingdom.

They are going to find a new identity by going into the past. History became important, so they visit ‘Great Zimbabwe’ for inspiration – the old culture, all claiming their heritage.

Zimbabwe, in the Shona language, loosely translates into ‘great houses of stone.’ It’s the name locals gave the great ruin city that sits just outside the modern-day city of Masvingo. It’s the largest known, ancient stone structure south of Egypt, once the seat of power of a wealthy kingdom based on gold.

For 600 years these walls have stood here. The walls themselves are an impressive testimony that Africans capable of a uniqueness, which the white man has not always recognised.

I was supposed to use my abilities as a writer to write a new manual for the Great Zimbabwe, getting away from the Eurocentric interpretation.

The colonialists had used their cultural hegemony to reinforce their own version of history.

The archaeologists went to Great Zimbabwe. They were told by the British society that the Africans did not build the ruins. The word they used was ‘the mystery of Great Zimbabwe’ because they were trying to avoid the idea that it was built by Africans. That is why, when I went home, I said, ‘I’m not going to listen to the white man’s stories. I’m going to write my own.’

‘Zimbabwe was not built by either blacks or whites. The people who built it were brown in colour and were evidently the civilian people who were a mixture of Arabs and Jews.’

The Europeans said, ‘No, the greatness did not belong to the Zimbabweans. It belonged to somebody like the Phoenicians, the Arabs, the Queen of Sheba, the Jews, the Chinese, and the Indians – they thought of everybody. Anybody else, except the Africans.

Why didn’t they want to acknowledge that it could have been black Africans that built it?

That was very obvious. They were going there to civilise Africans who were in darkness, who had no history. That was the reason for being there, so if they accepted that some of these Africans had these wonderful civilisations their reasoning would fall apart.

Dr Mufuka had his own connection to the ruins. He first saw them as a child and they left a profound impact on him.

I was raised about 10-miles away, so there was a bus, for a shilling, to the ‘Great Zimbabwe’ but this was for tourists. Blacks were not allowed there but if there were no white visitors blacks would just wander about so I visited it as a child.

So, how old were you when you first saw them?

Oh yes, I was obsessed with history. We would just turn-up and if there were no white visitors you can wander about until we were tired and until our bus came back, which would be another hour or so. That was most amazing.

But here you are, at an ancient structure. You’re from a local family. For all you know, your ancestors could have helped to build it. How did it feel to not be allowed to be there and to look around properly?

Yes, we felt, in some ways, deprived, of what belonged to us. That we belonged to regret people that we were oppressed by the colonial regime.

So, people who have never seen it, what does it look like?

The structures are massive, particularly the great wife’s house. Inside they had drainage and their structures. The stones are chiselled to be exactly the same size as they built the structure, and they are not connected by mortar or cement.

There’s nothing holding them together?

And it’s actually built around existing rocks and stones, isn’t it? So, the skill that they would need to build around that base would take quite a lot of sophistication, wouldn’t it?

Yes, so the ones around the stones are chiselled and they are small and flatter than the ones which come on top, and it’s not straight, so it’s wide at the bottom and it’s smaller at the top, so they probably figured it out that a curved structure would be stronger than a straightforward wall.

It’s now thought that the City of Great Zimbabwe dates back to a few Centuries AD, and timber found there is from the 1100s. At that time, it would have been a similar size to Medieval London, trading and exporting gold across Southern and East Africa. Great Zimbabwe had one more asset that set it apart, rain. While other areas struggled through catastrophic droughts Great Zimbabwe was fertile and relatively damp.

This was a wet area, always clouded by wet cloud throughout the year so that made it even more mysterious. Not only that, my mother belongs to one of the smallest tribes, which is the ‘keeper of the rain bed.’ These people are in charge of the shrine for rain and that shrine was based at ‘Great Zimbabwe.’ So we knew some of these things – they were a legend.

So, this is where the rain birds would have been, these are the large, carved, stoned birds that were taken by European explorers in the 1800s, and they took them back to SA.

There were five of them. They were carved out of stone and put on stilts but they represented real birds, called the rain bird. When people are praying for rain, when the cloud comes over they know that their prayers have been answered.

Over the years several explorers, most of them European, looted other priceless artefacts from the ruins. The rumour that it was a site of King Solomon’s mines even led some to dig under it, destroying ancient walls. All the while, the archaeologist argued over who could have built them. In the 1920s the British Academy asked the renowned Egyptologist, Gertrude Thompson, to examine the ruins in the hope that she could prove once and for all that an Arab or other civilisation was responsible. But she and her all female team of archaeologists came to a decisive conclusion that enraged the colonial authorities.

She used a word ‘incontrovertible’ that there is no argument whatsoever. There’s no possible evidence that anybody other than the Africans who lived here built the ‘Great Zimbabwe’ and that there is no evidence in artefacts or in the architectural style, which reflects any foreign influence. Everybody and his uncle were up in arms. They said, ‘this is a team of girls.’ What to do? ‘No, she went home quite disgraced,’ but the book is still there.

Six decades later and the newly elected leftist-government of Robert Mugabe was determined to rewrite the history books. The country itself was named after the ruins and the new flag was to feature the historic rain bird. The problem was the real things were still in SA and no one knew what they looked like.

The Speaker of the House ,he was responsible but none of these people have seen the real Zimbabwean birds because the Zimbabwean birds were in Cape Town. So, you’d bring a drawing of different images and say, ‘which one do you think is the real bird?’ They’d say, ‘this one, I think, is the nearest.’ But they picked one bird for everything that represents Zimbabwe, on the flag on the money, but the one they have is the nearest but it’s not the real one because it doesn’t have the beak, it’s cut off. It’s not anything like the one in the archives. It was one of my happiest times but it was also full of challenges because the politicians insisted that I must say that the ‘Great Zimbabwe’ was built by revolutionaries, African Marxist Revolutionary cadres. And I refused, I said, ‘No, there’s nothing revolutionary. They were just ordinary Shona people building as they were told by the king.’ So they were angry with me and I had to leave Zimbabwe in a hurry, so I had to pack my bags quickly because now they were looking to lock me up. Everybody in power wants to control history because it creates power. It brings them legitimacy, and the historian is caught in between.

Dr Ken Mufuka, who now lives in South Carolina and teaches at Lander University. He was speaking to me, Rebecca Kesby, for Witness.

That was Rebecca Kesby of the BBC World Service. This podcast, which is republished with the permission of the BBC, is part of Witness, history as told by the people who were there.

This has been the Rational Perspective, until the next time, cheerio.