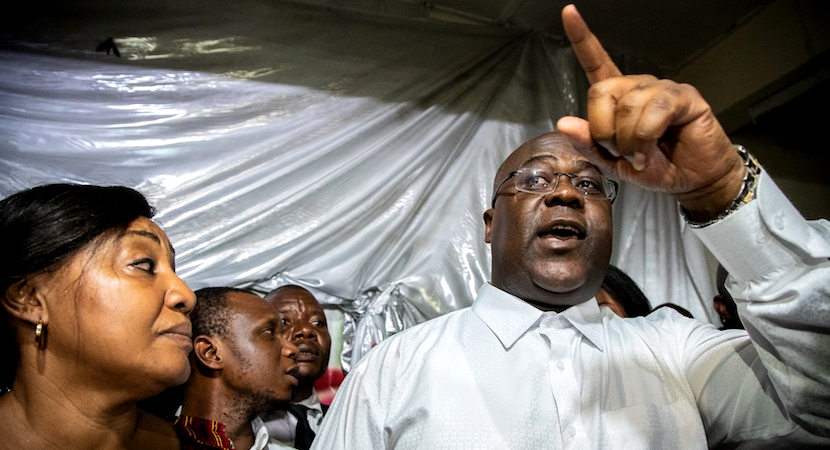 JOHANNESBURG — The Democratic Republic of Congo has the potential to become one of Africa’s richest countries with its mineral reserves and large population (81m people). But it’s been dragged down by bad politics in recent decades and the Kabila family have had an iron grip on the nation. However, that grip appears on the surface to have now been broken in a shock election victory by opposition leader Felix Tshisekedi. Some say that Tshisekedi owes his victory, in part, to Joseph Kabila, a man who wants to see a more ‘lenient’ opposition figure in power as he looks set to fight possible corruption charges. Nevertheless, companies such as Glencore – which has had troubles in the DRC of late – will be watching these developments very closely.  – Gareth van Zyl

*A Eurasia Group report from 8 January said the Catholic church is set to intervene as it observed the winner of the election to be opposition leader Martin Fayulu, a result unlikely to be accepted by President Joseph Kabila. And hence a deal would be cut with Tshisekedi.

The prospective change of administration may spur optimism among mining investors including Glencore Plc and Barrick Gold Corp. that they can reverse elements of a fiercely disputed new industry code that raised royalties and added taxes.

“You know that this proclamation is the fruit of results trafficked, invented and fabricated,” Fayulu told reporters after the results were announced. “These results have nothing to do with the truth of the ballot box.”

The Kabila family has led Congo for more than 20 years. The outgoing president succeeded his assassinated father in 2001 before winning elections in 2006 and again five years later. Barred by the constitution from seeking a third term, Kabila handpicked Shadary, a loyalist former interior minister, to run for the ruling Common Front for Congo coalition, fuelling suspicions the current head of state intended to retain considerable influence over his preferred successor.

A month ago would anyone believe that an opposition candidate would win the DRC's elections? Irrespective of the nature of Felix Tshisekedi's electoral victory, the DRC's elections highlights the power that civic groups play in forcing democratization through blood and tears

Pre-election polling by New York University’s Congo Research Group recorded Shadary trailing the opposition by a large margin – with Tshisekedi topping a survey in October and Fayulu commanding a strong lead two days before the vote.

Tshisekedi’s party has traditionally been strong in Kinshasa and the central Kasai region. He joined forces with Vital Kamerhe, the head of another major opposition party who came third in the 2011 election, in an effort to boost his popularity in eastern Congo. Kamerhe is set to serve as Tshisekedi’s prime minister under the terms of their agreement.

Analysts are now looking to the verdict of the influential body representing Congo’s Catholic bishops that said Jan. 3 that results gathered at polling stations on election day by its 40,000-strong observation mission showed which candidate had won, without naming the person. The New York Times cited a senior adviser to Kabila as saying the Catholic group believed Fayulu, rather than Tshisekedi, won comfortably.

“If we find that the results of the catholic church are not the same as those of the electoral commission we will know there was a change of plan,” said Stephanie Wolters at the Pretoria-based Institute for Security Studies. “Those of us who have followed this very closely have all been told that there were conversations behind the scenes between Tshisekedi and Kabila.”

Fayulu called on the religious body for support and to proclaim him the winner. “They will not steal victory from Martin Fayulu,” he said.

Shadary’s campaign and CENI accused the bishops of violating Congolese law and risking a popular uprising.

The DRC Electoral body must release “accurate” results timely and not undermine the voice of the Congolese people. Kudos to the DRC Catholic Church bishops for standing with the truth.What ZEC did in Zimbabwe must never be a script worthy emulating. Africa change,excel and shine!

CENI released the results three days later than scheduled, prompting speculation about how the agency was handling the counting process. SYMOCEL, a group of Congolese civil society organisations which deployed 20,000 election observers, said in a report on Tuesday there had been major irregularities at the results-compilation centres, with numerous cases registered in Shadary’s home province of Maniema.

Hours before the results were released, the Catholic organisation urged CENI to honour “its duty to publish only results from the ballot boxes.” A body representing Congo’s Protestant leadership and SYMOCEL co-signed the document.

“Outgoing President Joseph Kabila will be able to influence Tshisekedi, who now owes his ascendancy to power to Kabila’s control of the electoral commission,” Robert Besseling, a Johannesburg-based executive director at business risk consultancy Exx Africa, said in an emailed note. “At least initially, Tshisekedi will be dependent on the political favour of Kabila, who seeks immunity from prosecution and protection for his family’s substantial business interests.”