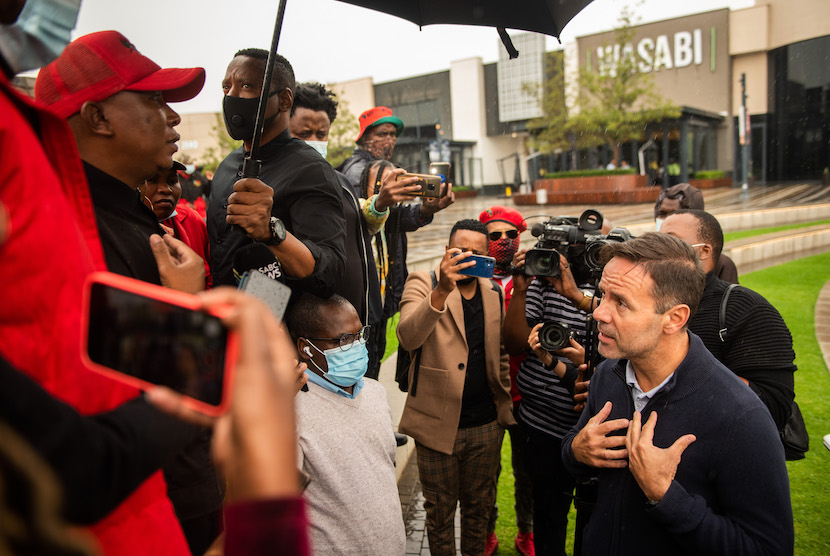 Julius Malema last week showed that when he shouts jump, the government asks how high. The circumstances around the political gymnastics on display was his inspection of the local to foreign employment ratio at a restaurant in Midrand. The EFF demands it be 60/40 by the way. That’s a political party, with zero legal authority, making demands of a private business in this country because “they will comply” … or else, I suppose. We’ve come to understand what that means. Flanked by throngs of journalists, the EFF says it went “to check their [restaurant] labour policies, staff complement and ensure that our fellow Africans are not exploited and locals are employed to a satisfactory level”. Shortly after the media storm outside Mall of Africa, Labour Minister Thulas Nxesi said his department was beefing up its labour inspectorate by 500 people to do site inspections. He bemoaned the fact that he has only 1,000 inspectors to vet two million businesses in South Africa. Another political party, the Patriotic Alliance, has upped the ante on blatant anti-foreigner sentiment, similarly conducting inspections of its own at migrant-owned shops in Eldorado Park and confiscating expired goods. Before the day was done, another political party, the Inkatha Freedom Party said it had, in 2020 already, submitted a Private Members Bill to Parliament calling for the employment regulation of foreign nationals across the entire economy. With the pressure mounting, President Cyril Ramaphosa – speaking after an ANC National Executive Committee Lekgotla on Sunday – said South Africa’s migration policy remains “infused with principles of pan-Africanism”. He said the governing party must act to ensure the debate is not overtaken by right-wing rhetoric or the “stoking of anti-African sentiment”. Meanwhile, Nxesi says legislation bringing quotas into effect is still to be finalised. – Michael Appel

Every business has its own staff complement. I speak to restaurant owners who have a 100% South African staff ratio, and I know of places that probably have 100% foreign employees. Some of the places are foreign-owned by Zimbabweans, and some places, like mine, are German-owned but we don’t have a single German employee. There isn’t one single truth. The reality is there are a lot of places that have a high foreign staff complement. This could be due to a certain laziness by the owners not wanting to train and up-skill local staff. If you put the work in and you train these local kids, you get an incredibly loyal, productive and motivated team. There is one fairly well-known person who talks about having 96% local staff complement. He does yearly audits on all of his stores. He says he really gets a huge sense of loyalty and gratitude from the local staff. We might need to acknowledge there is an issue we have fostered and find ways to effectively train locals.

The IFP has submitted a Private Members Bill to Parliament to regulate the employment of foreign nationals in ALL sectors – not just restaurants. We need to prioritise unemployed South Africans into job opportunities first. #JobSeekersSA #PutSouthAficansFirst pic.twitter.com/EmUIt60BeF

On stereotypes within the hospitality industry

Stereotypes about foreigners being better skilled and speaking better English do exist. But, South Africa as a nation needs qualified staff. If a well-educated accountant – from Zimbabwe, for example – comes with a legal work visa to South Africa, we should try to find him work as an accountant. But this speaks to the bigger political issues that are not up to the hospitality industry to solve. Maybe the best use of a qualified accountant’s time is not to wait tables at a restaurant.

[In Case You Missed It]: CIC @Julius_S_Malema responding to a journalist asking what the EFF will do if other establishments do not comply.

That was just a taste of things to come. It took Home Affairs four days to announce a wave of raids on hospitality establishments, at least for the Western Cape. These raids are rather intimidating because suddenly you have police and Home Affairs officers demanding the documentation the EFF was demanding. It’s a PR game when it came to Malema, but it has ripple effects with the proper authorities. Malema had no right as a politician to go into any business and demand any kind of documentation. It was pure intimidation and a PR stunt. But the reality is that the relevant bodies and ministries are listening when someone like Malema speaks up even though he’s not part of the government.

When it comes to work visas, there are a lot of fake documents and copies circulating. There is a serious issue that we experienced in the past with my business when trying to verify foreigners’ work visas. Getting in contact with Home Affairs proved to be absolutely impossible. Sending someone’s details or a scan of a work visa or refugee visa to Home Affairs resulted in exactly zero responses.

In favour of employment quotas?