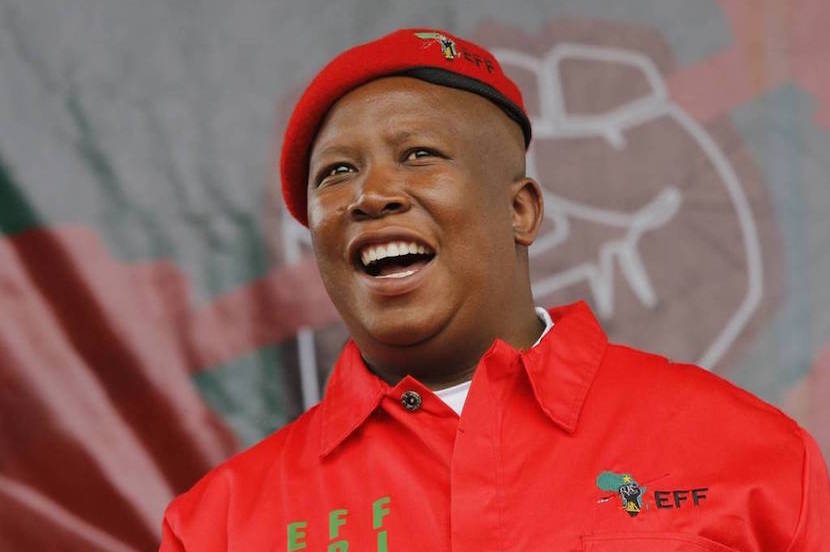 In this in-depth report, BizNews journalist Linda van Tilburg explores why Economic Freedom Fighter (EFF) leader Julius Malema – head of a party represented in Parliament – hasn’t been arrested for inciting violence against police officers and their families. While Malema is known for stirring the pot of racial tension, he is seen as having overstepped a mark in taking on state law-enforcers. Civil society organisations are pushing for prosecution, saying Malema is threatening democracy and stability. – Editor

If South African police want a fight, they must declare it. We will treat them the same way we treated them in the 80s. We will not only fight them at the picket line, we will go to their homes and fight them in their own houses, with their own families. We are not scared of police. They think this uniform gives them some superior power. We will see you after you take off the uniform at night, at home, when you’re about to eat.

I think the leader of the EFF has crossed the line on this one. He has really crossed the line. You are not going to do this, threaten the police and think the police are going to fold their arms and sit back. The police – their job – is prescribed in the Constitution of the land, Section 205(3). That is to protect, prevent, investigate, uphold the law and enforce the law. So nobody has the right to threaten the police. Especially when it comes to their job.

We were approached by more than 1,000 police officers who contacted us and requested our assistance, after these comments that were made by Julius Malema. The members really took it very seriously. They say their families are also in danger. They wanted to know what they can do. We asked the members to give us a mandate, and then on the 25th, myself and Ernst Roets from Afriforum went to the Lyttelton Police Station.

Renate Barnard on opening a case against Malema:

We made two statements (but it’s one case docket). The docket was registered under the Lyttelton CAS number, 470 of 11/2020, but I’ve been informed that the case has been sent to South African Police Services in Smithfield. Now there’s a new case number. This is despite the fact that we specifically requested the top management to please send this case docket to the Crimes Against the State Unit that falls under the Hawks. They are dealing with all the threats against the state. We clearly feel that this conduct of Malema’s was a clear threat against the superiority of the state. We are actually very dissatisfied with the fact that they sent the docket to a normal, ordinary detective unit. But, we are also in co-operation with Gerrie Nel’s team – his private investigation team. They also said that they will monitor the case and if need be, we will request the national commissioner to send the docket to the Crimes Against the State Unit, for proper investigation.

He actually condemned the whole thing but he didn’t do anything. He’s the minister. I mean, he’s very quick to act when people are using liquor in the disaster time when there was lockdown, but for his own he couldn’t stand up. Even the national commissioner. He didn’t even make a comment on that. So, it was very shocking and it’s also disheartening to the members. They are looking up to these people. They are supposed to take care of them. Cele also said the police officers know what to do. They can take action. I’m talking from experience. The moment a police officer takes action, he will stand in the box being charged criminally. Then nobody will be there to back him up.

I think there is no doubt that this is intimidation. It’s inciting people to commit acts of violence and to transgress the law. What makes it worse is that this is an attack on the state. It’s sedition. He is targeting not only policemen and women, but by saying people should go to their homes, also targeting their families. I think this has definitely gone too far. But I think he’s starting to make these kind of radical statements more and more, because he is in trouble at the moment. We already have two cases, where we represent a policeman that was assaulted by him. Also, we lodged a complaint with regard to him firing a firearm in public. So he has trouble. It’s just a question of time before he is brought to book.

Kallie Kriel on whether Malema has gone too far:

Most definitely. I don’t know if he thought this through. You know, in the month running up to this, he loved targeting minorities and trying to isolate minorities. He has now targeted all communities. I was a speaker at a Sanco protest last week and to experience the kind of negativity towards these statements by Julius Malema, means that he’s isolating himself from the broader population. You must never forget that 90% of the people in this country did not vote for Malema. The reason he is so prominent is because he’s getting a lot of publicity.

Max du Preez on Malema’s threat on the police:

I was surprised at the low level of outrage at his statements. That police personnel would be attacked privately at home with their families. That is quite an outrageous threat. We saw a bland condemnation by the Minister of Police, no reaction from the police themselves. It was down to Afriforum to actually lay a criminal charge and I think that’s quite outrageous. I think Mr Malema stepped over a line here quite significantly. In any decent society, this is really outrageous. To say we will send our shock troops to you at home and attack you at home with your families. Then he adds ‘like we did in the 1980s.’ We have to remember that Mr Malema was born in 1981. So when the 80s was over, he was still a primary school boy.

I think it’s an example of the escalation in radical rhetoric by the EFF. I think we’ve reached the point where we need to say, ‘This is stepping over the line, you’ve got to stop right now.’ If we don’t stop that now, it will get worse – as it has been in the last few weeks and months.