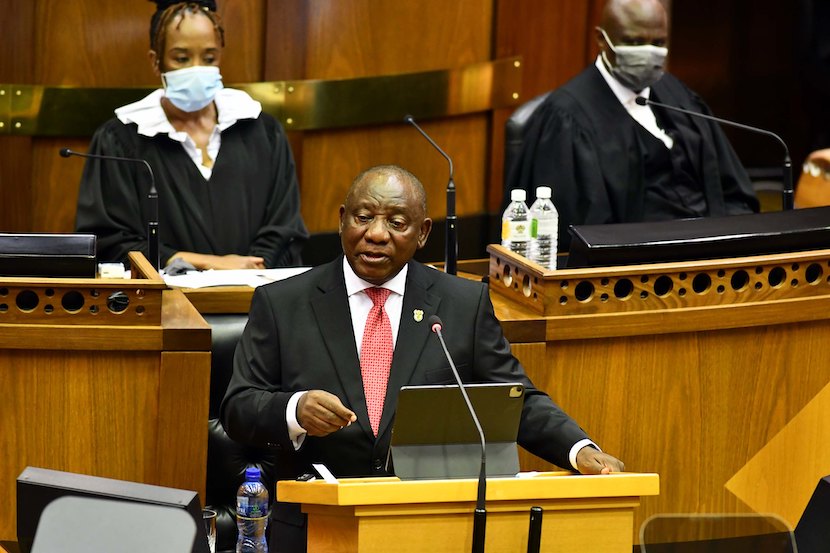 South Africa’s Parliament is widely viewed as little more than a talk shop in which the ANC exercises its majority power to shield undeserving MPs and the executive from accountability. This isn’t at all what the drafters of the constitution envisaged when it was penned. Hugh Corder, Professor Emeritus of Public Law at UCT, writes in the piece below first published on The Conversation that, in an ideal world, Parliament – acting in the best interests of the country and no one political party – enforces standards of accountability and oversight. But, due to the country’s party-list proportional representation electoral system, any MP who steps out of line can be axed by their party. For so many, it’s simply a pay cheque, and a rather handsome one at that. Many of those on the ANC’s benches have no marketable skills and would immediately join the ranks of the unemployed were it not for their status as MPs. What the system has done is create an army of yes-men and women who, despite swearing an oath to support, uphold and defend the constitution of the country, act only in the interests of the party. One needs look no further than former president Jacob Zuma. It was clear to anyone with some grey matter that the man and his friends were treating the country as their own personal thiefdom. Yet, the ANC helped the man escape numerous motions of no confidence when it was quite clearly in the national interest that he be booted from power. The Zondo Commission’s findings have quite clearly articulated Zuma’s role in the destruction and looting of the state. The ANC helped keep the now convicted criminal in office. There is a superficial decorum observed in Parliament in which everyone calls each other “honourable member” when, very often, their words and deeds are anything but. Question and answer sessions are farcical and normally degenerate into a cacophony of hours of “point of order, Speaker” from those in red overalls. Speaking of the EFF, their leader Julius Malema is an MP. One would hope that in holding such a position – funded by the taxpayer – that he wouldn’t be allowed to go around openly inciting death, destruction and revolution. Here is a direct quote taken from a recent speech Malema gave in the Western Cape: “You must never be scared to kill. A revolution demands that at some point there must be killing because the killing is part of a revolutionary act. Why are you scared that anything that stands in the way of a revolution must be eliminated in the best interests of the revolution? The founding manifesto of the EFF says we will take power by all means necessary and therefore revolutionaries, when confronted by that situation, should never think twice.” How can someone propagating killing anyone remain within the constitutionally-mandated corridors of Parliament? In the UK recently, the British interior minister Suella Braverman resigned after sending an official document from her personal email in a “technical infringement” of government rules. She wrote to the now former Prime Minister Liz Truss saying, “I have made a mistake, I accept responsibility; I resign.” It will be a cold day in Limpopo if the bar for accountability were ever that high in South Africa. – Michael Appel

South Africa’s parliament fails to hold the executive to account: history shows what can happen

In South Africa’s apartheid era from 1948 to 1994, the executive arm of government dominated over parliament. In any system, this allows a small group of politicians to dominate the larger body of elected representatives from which they are drawn, with no effective limitations. Corruption and abuse of power almost always follow directly.

At the start of the new democratic era, the drafters of the 1996 constitution changed this. The constitution gives the legislature the authority and the obligation to oversee the exercise of public power, and hold the executive accountable.

The constitution contains nearly 40 provisions to do this. Chief among these provisions is section 55 (2):

The National Assembly must provide for mechanisms – (a) to ensure that all executive organs of state in the national sphere of government are accountable to it; and (b) to maintain oversight of (i) the exercise of national executive authority, including the implementation of legislation; and (ii) any organ of state.

The foundational values of “accountability, responsiveness and openness” in section 1(d) of the constitution demanded a radical change in parliament’s relationship with the executive.

In 1994, the Speaker of Parliament began a range of initiatives to get the change under way. I undertook three projects at her request between 1996 and 1999:

The report recommended legislation to set standards of accountability and institutional independence. It proposed new rules about how the two houses of parliament should report to parliamentary committees. And it suggested there should be a Standing Committee on Constitutional Institutions, essentially what the constitution calls the State Institutions supporting Constitutional Democracy, or the Chapter 9 bodies. These include the Public Protector, the Human Rights Commission and the Auditor-General.

Parliament responded only partially and ineffectively. It referred the matter to the Rules Committee, which changed some portfolio committee processes. But the changes did not embrace the spirit of the constitutional obligations.

Parliament failed to live up to its constitutional mandate. This failure was noted by the State Capture Commission as having contributed to the relative ease with which the administration of former president Jacob Zuma, and its fellow travellers, could corrupt state behaviour.

The absence of standards of accountability and the fact that portfolio committees are not independent, are the reasons parliament is failing in its constitutional mandate to hold the executive accountable.

This matters because the lack of parliamentary vigilance has a number of consequences. The first is that the executive and public administration will succumb to the temptations that their power gives them. The second is that the electorate is failed by its direct representatives. Thirdly, that the organs of state which must secure integrity (the courts and Chapter 9 institutions) are placed under undue stress. And finally, it falls to civil society and public-spirited individuals to take on the burden of challenging the abuse of power.

A condition of the exercise of power in a constitutional democracy is that the administration or executive is checked by being held accountable to an organ of government distinct from it.

Accountability means explaining decisions or actions, making amends for any fault and taking steps to prevent a recurrence.

The separation of powers has been the foundation stone of democratic government since the 17th century. Public power was divided among the executive, judicial, and legislative branches of government. Methods of mutual checking and balancing were established.

During the 20th century, executive power expanded so as to meet the needs of growing populations in a changing world.

The executive branch thus came to dominate the legislature. The judicial authority rose in prominence after 1945. This, as bills of fundamental rights and an increasing emphasis on the lawful exercise of public power made their way into national constitutions.

Almost all African countries experienced these developments in their formal liberation from European imperialism in the second half of the 1900s.

The pattern of allocating power began to shift in the early 1990s, with freedom coming finally to Namibia and South Africa . This coincided with the collapse of the Soviet empire, and a rash of constitution-making in central and eastern Europe. This soon followed in mainly Anglophone Africa.

These new constitutions typically gave pride of place to bills of rights. They gave the superior courts the authority to test whether rights had been infringed and whether government decisions and actions were lawful and constitutional. The judicial branch of government rose in political prominence. This, in turn, focused attention on judges’ independence and accountability.

Given the experience in the developed world, the drafters of these new constitutions recognised that politicians would put pressure on the courts. So the inclusion of what the South African constitution calls state institutions supporting constitutional democracy took hold.

Most modern constitutions in Africa followed suit. They established bodies such as the ombudsman or public protectors and human rights and gender commissions.

Independent electoral commissions, auditors-general, and anti-corruption commissions also came into being. These bodies, collectively known as the integrity branch of government, complement the review powers of the courts in holding the executive to account.

How have these arrangements translated into practice?

The general picture across Africa is patchy. There are only isolated examples of the legislature demanding answers from the president and cabinet. This results in the denial of constitutional rights. It puts even more pressure on the courts to come to the rescue and exposes the judiciary to unwarranted attack.

The South African legislature is no exception.

There are many reasons why the South African parliament has failed to hold the executive accountable.

Foremost is the control that political party bosses exercise over members of parliament. This is due to the country’s party-list proportional representation electoral system.

The majority party in parliament (the African National Congress) has held that position since 1994. It chairs all but one of the portfolio and standing committees, which are the chief mechanisms for accountability.

Where the party whip demands unquestioning obedience, as has been the case, parliamentary committees ask few questions and fail to hold the executive to account. This, despite the best intentions of opposition (and even some governing) MPs.

It forces people to use access to information routes or other less open means of exposing the abuse of power or maladministration.

For this reason, the State Capture Commission has advised that the electoral system and some aspects of the committee functions should be reviewed. This would weaken the grip of the party on its MPs.

Given the divisions within its ranks, the ANC is unlikely to promote any steps that undermine the influence of its leadership cohort.

All those who value the responsible exercise of public power in a constitutional democracy will support such a recommendation. But few will be holding their breath.