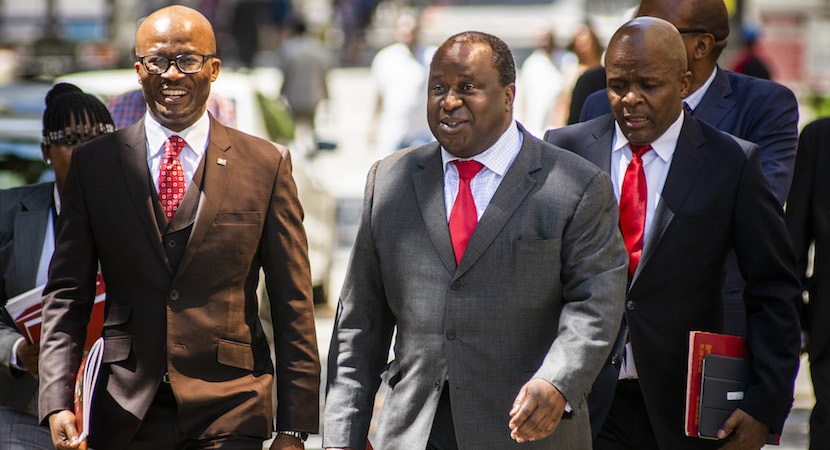 JOHANNESBURG — The Public Investment Corporation’s deals in recent years are firmly under the spotlight as a crisis unravels at the money manager. A key problem with the PIC is that it’s become custom for the Deputy Finance Minister to be chair of the organisation. According to some experts, this needs to stop as it introduces a political slant into the organisation. The only irony here is that it’s the Finance Minister himself who is in charge of ultimately appointing a new board at the PIC. It, therefore, begs the question as to whether the PIC can ever truly be independent? – Gareth van Zyl

(Bloomberg) – A deepening crisis at South Africa’s biggest money manager is threatening to cast a pall over the economy and throw into doubt potential deals, including the bailout of one of the nation’s largest clothing retailers.

Nine Public Investment Corp. directors quit on Friday, saying the institution overseeing the pension funds of most South African civil servants has entered a “state of paralysis” following misconduct claims against some board members. Those included questionable investments in the bonds of cash-strapped state power producer Eskom Holdings SOC Ltd. and the purchase of shares in an overvalued and a little-known technology company.

The state-owned money manager with more than R2trn ($149bn) in assets is typically front and centre of major domestic investments in South Africa, including rescue talks to help debt-laden retailer Edcon Holdings Ltd. stay afloat in a depressed consumer environment and stagnant economy. Finance Minister Tito Mboweni has started the process to appoint a new board, a spokesman said on Monday. The outgoing directors have said they will stay on until new ones have been appointed.

“The PIC is central to South Africa’s economy,” Patrick Mathidi, head of equities at Aluwani Capital Partners, said by phone from Johannesburg. “The whole situation at the PIC is a concern.”

The PIC’s chairman has historically been the country’s deputy finance minister, in this case Mondli Gungubele, one of those who resigned on Friday. That’s raised the question of how much political influence affects decisions, such as to invest in Eskom, which has long been a financial headache for the National Treasury.

A former PIC board member last week told a commission of inquiry that the money manager would be better off without ministers on the board, while a representative of a local pensioners group said the PIC has “no mandate to invest in politically driven investments that yield no returns.”

Fears that South African lawmakers have had too much influence have reared their head in the past, notably when PIC bought a state-owned stake in wireless carrier Vodacom Group Ltd. at a discount, so the government could fund Eskom. But not all the fund manager’s controversies have been overtly political. Former Chief Executive Officer Dan Matjila allegedly used his position at PIC to support a business owned by a romantic partner, an accusation he’s denied.

“Pension money is sacrosanct – you don’t gamble with it and once you start fiddling around with that for personal or political gain, it’s criminal,” said David Shapiro of Sasfin Holdings Ltd. in Johannesburg, who has been trading stocks in the city since 1972. “A board is vital in order to have some oversight and to ensure bad practices don’t continue.”

Other than Edcon, recent deals led by or involving the PIC include the acquisition of a majority stake in Karan Beef (Pty) Ltd., the world’s biggest single-site feedlot. The money manager also built a stake last year in engineer Murray & Roberts Holdings Ltd., helping to thwart a takeover attempt by Germany’s Helmig family, and was pivotal in fighting off a Chilean pursuer of South African drugs company Adcock Ingram Holdings Ltd. in 2014.

But it was an investment in Ayo Technology Solutions Ltd., a business venture of media tycoon Iqbal Surve, that proved particularly controversial. The PIC took all of Ayo’s R4.3bn private placement of shares in December 2017, a move that has been flagged to the inquiry for potentially having flouted processes. The PIC’s investment valued Ayo at R14.8bn even though its assets were estimated at R292m.

In the past year, half of the PIC’s executive committee have been suspended or resigned, including Matjila. The Pretoria-based money manager’s investments make up about 13% of the market capitalisation of the Johannesburg Stock Exchange, according to its website.

Not all investment decisions will be immediately affected by the board’s walkout. Depending on their size, some are signed off by managers or the investment committee, the inquiry heard in the past two weeks.

Even so, it “gives great comfort to all stakeholders when all key governance structures are in operation to provide oversight to executives,” which isn’t happening, Mathidi said.