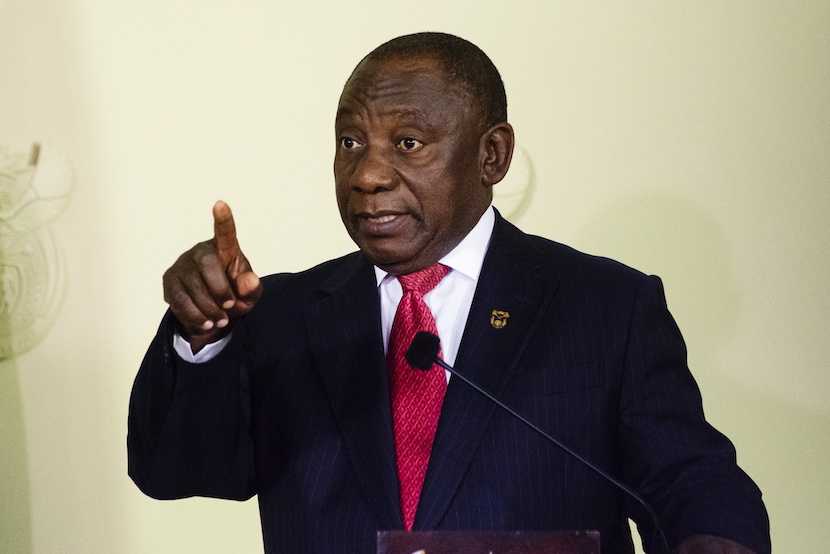 (Bloomberg) – South African President Cyril Ramaphosa will seek an urgent judicial review of findings by the nation’s anti-graft ombudsman that he violated the constitution and executive ethics code when he misled lawmakers about a campaign donation.

The lawsuit will be the latest salvo in an ongoing battle between Ramaphosa and Public Protector Busisiwe Mkhwebane, who was appointed during his predecessor Jacob Zuma’s rule and has been accused by critics of playing politics and siding with the president’s opponents in a power struggle in the ruling party. She denies the allegations and says they may be aimed at undermining her investigations.

Mkhwebane rejected the president’s assertion that he didn’t know about a R500,000 ($36,000) payment services company Bosasa made to his campaign to win control of the ruling party, inadvertently failed to disclose it and rectified his mistake as soon as possible. Allegations that he exposed himself to the risk of a conflict of interest or used his position to enrich himself and his son, who had business dealing with Bosasa, were substantiated, she said in a July 29 report.

The Public Protector’s report is fundamentally and legally flawed, and it is appropriate that the findings be tested in court, Ramaphosa told reporters in Pretoria, the capital, on Sunday.The president also said he will ask the court to suspend Mkhwebane’s directive that parliament take action against him and that he disclose details of all the donations he received within 30 days.

The courts have overturned several of Mkhwebane’s previous rulings and rebuked her for failing to stick to her constitutional mandate.

Two days ago, on Friday 19 July, the Public Protector released a report on an investigation into allegations that I violated the Executive Ethics Code.

Since then, many South Africans have expressed concern about the findings and their implications for the country.

I have decided that it is necessary that I should make a statement on this issue to address these concerns and reaffirm that the work of government continues.

When I assumed office as President of the Republic in February last year, I undertook to work alongside all South Africans in bringing a decisive end to state capture, to turn the tide on corruption and to restore the integrity and credibility of our public institutions.

Since then, as a country, we have made remarkable progress.

We have taken decisive measures to halt the abuse of public bodies for private gain.

The Zondo Commission of Inquiry continues its work.

We are continuing to strengthen institutions like the National Prosecuting Authority, the South African Police Service, the Special Investigating Unit, the State Security Agency and the South African Revenue Service.

This work must continue – and it must be intensified – if we are to rid our country of all forms of corruption and criminality.

This requires, among other things, that we respect, strengthen and defend the institutions established by our Constitution to support democracy and safeguard the rights of our people.

The Public Protector is one such institution.

It carries a Constitutional responsibility to investigate any allegations of improper conduct in state affairs or public administration and to take appropriate remedial action.

It is essential that the Public Protector enjoys the confidence of South Africans, that it acts impartially – without prejudice or favour – and that it is above reproach.

It is essential that the Public Protector acts independently, within the law and according to the Constitution.

As I indicated, on Friday 19 July, the Public Protector released a report in which she has concluded that I violated the Executive Ethics Code and the Constitution.

The findings that the Public Protector has made against me are serious.

They allege conduct that cannot – and should not – be taken lightly.

It should be a matter of concern for all South Africans that an office of such Constitutional consequence as that of the Public Protector should make findings of such a nature against the Head of State.

It is therefore essential – as it should be in all investigations – that such findings are based on fact, that they have a sound legal basis, that they are rational and that they have been arrived at through a fair, impartial and lawful process.

Unfortunately, the report released by the Public Protector fails to satisfy these crucial requirements.

After careful study, I have concluded that the report is fundamentally and irretrievably flawed.

This is strongly confirmed by my legal representatives.

The report contains numerous factual inaccuracies of a material nature.

The findings are wrong in law, are irrational and, in some instances, exceed the scope of the powers of the Public Protector.

Given these deficiencies, and consistent with our Constitutional architecture, it is appropriate that the courts make a final and impartial determination on this matter.

I have therefore decided to seek an urgent judicial review of the Public Protector’s report, its findings and remedial action.

I have instructed my legal representatives to prepare an application to this effect as a matter of urgency.

Given the gravity of this matter – and appreciating the effect that these findings have on the standing and credibility of both the President and the Public Protector – it is essential that the courts be given an opportunity to review the report and to find accordingly.

I have decided to take this action not only to protect the rights that the Constitution affords me as a person, but also to preserve the integrity of the office that I occupy.

I have decided to take this action not out of disrespect for the Public Protector as a crucial institution of our democracy, but in the expectation that the institution will ultimately be strengthened by an independent and impartial judicial review.

My decision to seek a judicial review of the report should not be seen as a comment on the person, competence or motives of the Public Protector, but is motivated instead by a determination that the law should be applied correctly and consistently.

I am taking this action in the firm belief that the President is not above the law, and nor is the Public Protector.

The Public Protector is equally bound by the law and, like the President, is answerable to the provisions of the Constitution.

It is therefore appropriate that we place the matter before the courts and that the courts be allowed to make a determination.

In the meantime, we continue with the urgent and critical tasks required to grow our economy, mobilise investment, create jobs and reduce poverty.

We will not be distracted from the great responsibility we have to advance the interests and needs of the South African people.