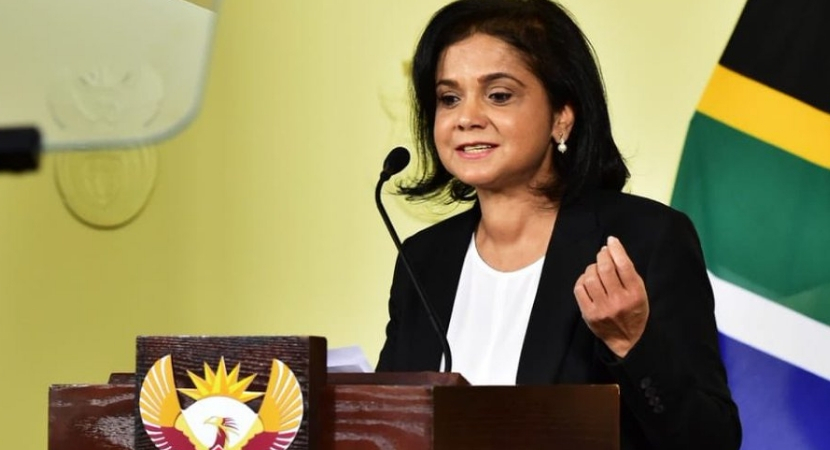 JOHANNESBURG — The days of Shaun ‘The Sheep’ Abrahams are now well and truly behind us as President Cyril Ramaphosa on Tuesday finally named the new National Director of Public Prosecutions. Respected International Criminal Court advisor Advocate Shamila Bahohi is set to take the hot seat in February next year after serving out a notice at her current job. On the surface, it looks to be a great choice and even more brilliant when one considers that she’s the first woman to occupy this key role. All eyes will be on whether she can fix the mess left by her predecessor… – Gareth van Zyl

(Bloomberg) – South African President Cyril Ramaphosa named Shamila Batohi as the nation’s new chief prosecutor, putting her at the forefront of efforts to tackle one of the world’s highest murder rates and rampant graft.

Batohi’s task is to rebuild a National Prosecuting Authority that’s been dogged by repeated changes to its top management and allegations that it allowed political considerations to influence its decisions to prosecute during former President Jacob Zuma’s rule. Zuma was forced to quit under pressure from the ruling party in February and replaced by Ramaphosa, who’s made the fight against crime and corruption a top priority.

“The National Director of Public Prosecutions needs to be able to take decisions independently and as well as impartially,” Ramaphosa told reporters in Pretoria, the capital, on Tuesday. “In appointing a new NDPP, we are addressing the state of disfunctionality and deficiencies within the National Prosecuting Authority.”

Batohi, who previously served as a legal adviser at the Hague-based International Criminal Court and head of the NPA in the eastern KwaZulu-Natal province, is best known in South Africa for leading evidence to a judicial commission of inquiry into allegations of cricket match-fixing in 2000.

“We in the NPA have important work to do, which includes devoting our efforts to holding accountable those who have corrupted our institutions, who have betrayed the public good and the values of our constitution for private gain, especially those in the most privileged positions of government and corporate power,” Batohi said.

Her appointment comes three months after the Constitutional Court ruled that the government’s decision to pay Mxolisi Nxasana R17.3m ($1.2m) to step down from the post was illegal because it constituted an attempt to buy him out of office. The court said the subsequent appointment of Shaun Abrahams was invalid.

Expect 🔥 from Shamila Batohi. She is going to be fiercely independent and speak truth to power. No holy cows for her.

While the president has the sole right to decide who heads the NPA, Ramaphosa’s decision to set up an eight-member advisory panel is seen as a step to ensure the appointment is more credible. The panel interviewed 11 contenders for the job and presented Ramaphosa with a shortlist of five names.

An average of 56 homicides a day were reported in South Africa in the 12 months through March, and the national murder rate of 35.2 per 100,000 people is more than six times higher than that of the US.

“Those elements who insist on frustrating the ends of justice and ultimately, the nation, will not be tolerated,” Batohi said. “Let us not succumb to despair at the thought that the challenges in place are insurmountable.”

Today, I am announcing the appointment of a new National Director of Public Prosecutions.

This follows the order of the Constitutional Court on 13 August 2018 that the President appoint an NDPP within 90 days.

In making this order, the Court highlighted the severe challenges that have confronted the National Prosecuting Authority in recent years, including leadership instability and a decline in public confidence in the institution.

Among other things, the Court said:

“The rule of law dictates that the office of the NDPP be cleansed of all the ills that have plagued it for the past few years.”

The court was concerned about the dysfunctionality of the NPA when it said:

“With a malleable, corrupt or dysfunctional prosecuting authority, many criminals – especially those holding positions of influence – will rarely, if ever, answer for their criminal deeds…

Shamila Batohi Day!
How nice 👍🏾
I hope she Hansie’s the Gupta’s.
Her international criminal court experience should be very useful in extraditions.

In appointing a new NDPP, we are addressing the state of dysfunctionality and deficiencies in the NPA that were identified by the court.

The National Director of Public Prosecutions occupies a vital position in our democracy, and makes an essential contribution to upholding the rule of law and ensuring the efficiency and integrity of law enforcement.

At this moment in our history, as we address matters that South Africans are most concerned about – such as state capture, corruption and widespread crime – our country needs a National Prosecuting Authority that is above reproach in the performance of its mandate and that enjoys the confidence of the public.

The NDPP must ensure that the National Prosecuting Authority exercises its functions without fear, favour or prejudice and should not be beholden to any vested interests, whether in politics, in business or elsewhere.

The NDPP needs to be able to take decisions independently and impartially.

In appointing the new NDPP, I decided to depart from previous practice.

While recognising that the Constitution requires that the NDPP is appointed by the President as head of the national executive, I sought the assistance of a panel of individuals from the legal fraternity and Chapter 9 institutions in recommending suitable candidates.

Adv Shamila Batohi is the new Director of Public Prosecutions (NDPP). May her tenure be one filled with prosperity and justice and may she not follow in the footsteps of her predecessor.

The members of the panel were Minister Jeff Radebe, as chairperson, and Auditor-General Kimi Makwetu, South African Human Rights Commission Chairperson Bongani Majola, Jaap Cilliers from the General Council of the Bar of South Africa, Richard Scott from the Law Society, Lutendo Sigogo from the Black Lawyers Association, Lawrence Manye from the Advocates for Transformation and Mvuzo Nyotesi from the National Association of Democratic Lawyers.

Following a process of nominations, shortlisting and interviews that were open to the media, the advisory panel proposed five candidates for the NDPP position.

After consideration of their recommendations, I have decided, in terms of section 179 of the Constitution, to appoint Adv Shamila Batohi as the new National Director of Public Prosecutions.

I am confident that Adv Batohi possesses all the attributes of a capable NDPP.

Throughout her extensive and distinguished career, and in the course of the selection process, she has shown herself to be a fit and proper person.

She started her public service as a junior prosecutor in the Chatsworth magistrates’ court in 1986 and steadily rose through the ranks to become the Director of Public Prosecutions in KwaZulu-Natal.

She was seconded to the Investigation Task Unit established by President Nelson Mandela in 1995 and later served as the first regional head of the Directorate of Special Operations based in KwaZulu-Natal.

For much of the last decade, she has served as a Senior Legal Advisor to the prosecutor of the International Criminal Court.

I hope the appointment of #NDPP Shamila Batohi also indicates that Ramaphosa wants to put an end to the Zuma-Masutha madness to recall our participation at the ICC. Let's wait and see. We haven't forgotten.

As the NPA Act requires, she has the experience, conscientiousness and integrity to be entrusted with the responsibilities of this office.

Despite the many challenges the NPA has faced in the past, we know that there are women and men of great ability, experience and commitment within the NPA who are dedicated to doing their job and doing it well.

It is our collective responsibility to ensure that the conditions exist for them to effectively serve the cause of justice and to meet the great expectations that the South African people have of them.

As this administration, we stand ready to provide whatever assistance necessary to the National Prosecuting Authority to ensure that it is able to fulfil its constitutional mandate without let or hindrance, fear or favour.

In conclusion, I would like to thank the members of the advisory panel for the diligence and care with which they undertook their task, and to thank Minister Radebe for chairing the panel.

I also wish thank all the candidates who made themselves available for appointment to this important position.

I wish Adv Batohi and the entire leadership and staff of the National Prosecuting Authority well in the work that lies ahead.

Advocate Batohi will commence her duties in February 2019 after serving her notice as Senior Legal Advisor at the ICC.