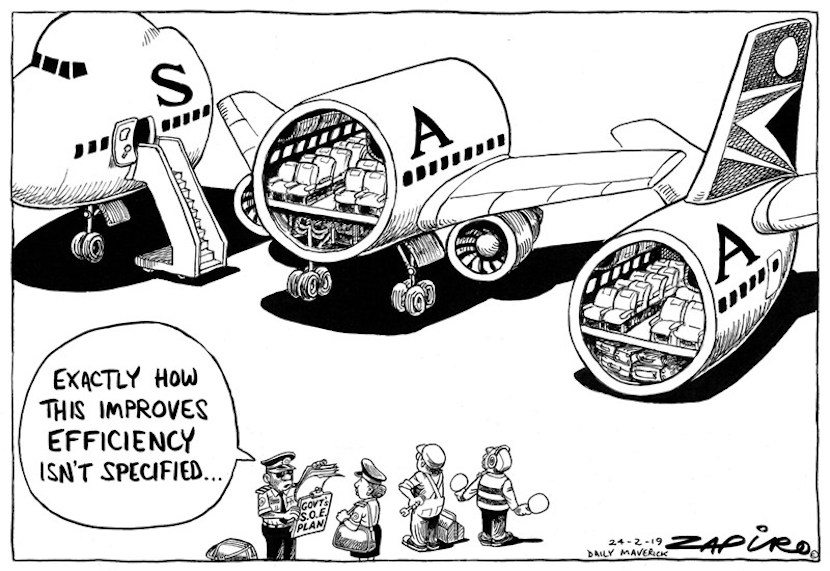 (Bloomberg) – When the pay strike at South African Airways is eventually settled, the quantum of the increases awarded to workers will only partly determine who wins and who loses.

The South African Cabin Crew Association and the National Union of Metalworkers of South Africa, which represent more than 3,000 staff at SAA, have indicated they’d consider 6.5% raises, not far off the state-owned carrier’s last official offer of 5.9%. A bigger sticking point is whether SAA buckles to union demands and freezes plans to cut 944 posts.

Any settlement that is contingent on a guarantee of job security would be a major setback to SAA’s plans to turn itself around after seven consecutive years of losses and wean itself off the government bailouts that have enabled it to continue operating. Yet a climb-down by the unions would weaken them politically and strengthen the government’s hand as it seeks to reduce its other personnel costs.

The strike, which began on November 15, has forced SAA to cancel numerous flights and is costing the flag carrier more than R50m ($3.4m) a day.

The government has signaled it won’t cave in to the unions’ demands: Public Enterprises Minister Pravin Gordhan, who oversees SAA, has said no more money will be made available to the airline and that saving it will require all parties to make sacrifices. Finance Minister Tito Mboweni has said SAA can never be turned around and has called for it to be shut down or sold.

Talks aimed at ending the strike continued until after midnight on Wednesday and resumed on Thursday. Both the striking unions said they wouldn’t comment for now in order to create an enabling environment for the negotiations and they hoped an acceptable compromise could be reached.

SAA said it would provide an update on its operations later on Thursday. The airline did announce plans to suspend all its services between Johannesburg and Hong Kong, in light of the political tensions in the Asian financial hub.

“By suspending these flights, we can concentrate on resuming more regional services at the earliest opportunity and make better use of all our resources,” Chief Commercial Officer Philip Saunders said in an emailed statement.

Adding to SAA’s woes, the Solidarity labor union said it filed a lawsuit to have the carrier placed in business rescue, a local form of bankruptcy protection, to guard the interests of workers and taxpayers whose money was being squandered, Solidarity said in an emailed statement. “To wait until SAA turns around perfectly by itself, given the history, is irresponsible and is not grounded in the reality that this enterprise is on its way to total collapse,” it said.