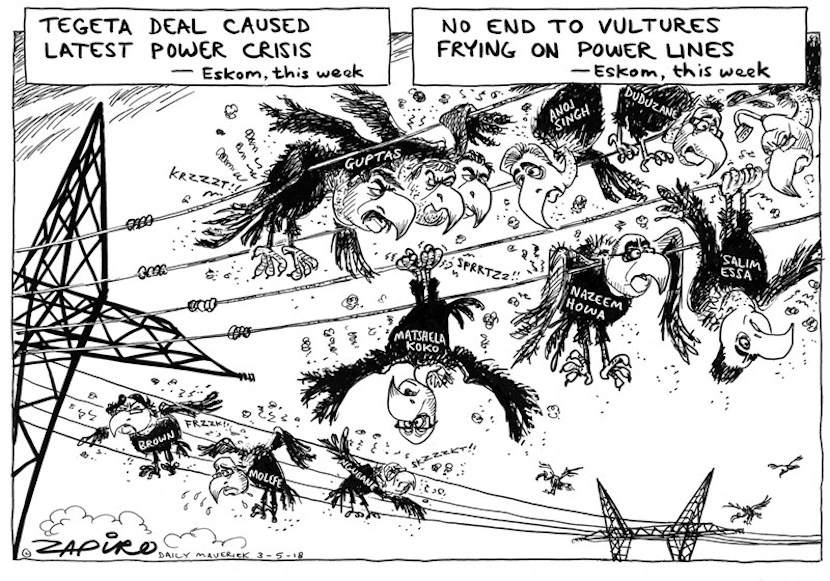 (Bloomberg) – Eskom contracts with five international companies will be scrutinised by South African state investigators as part of a widening probe into graft at the debt-laden state-owned utility.

The contracts were all repeatedly modified, with the value increasing above their initial approved cost. WSP’s agreement – signed by a company later bought by the Canadian firm – cost Eskom more than 60 times the original fee. Black & Veatch’s is more than 130 times the initial estimate, according to Eskom.

“There is an audit going on,” said Sikonathi Mantshantsha, Eskom’s spokesman. “All of them have been handed to the Special Investigating Unit,” as well as a number of others.

The documents filed with parliament’s financial watchdog lay bare the lack of regard for procedure or good governance by Eskom’s management over the past 15 years, during which the company racked up $28bn of debt and is now seen as the biggest threat to South Africa’s economy. The company is at the centre of an ongoing inquiry into so-called state capture, meaning the use of government-owned companies to steal money.

South African authorities have been investigating contracts between state enterprises and international companies for years. German software giant SAP agreed to hand back about $11m in improper payments in 2018 and is being investigated by US authorities. KPMG and McKinsey & Co. were also scrutinised, while ABB said it is being probed for suspect payments.

The Eskom documents detail numerous contract overruns and billions of rand of penalties incurred because of its failure to adhere to contract timelines. The company’s inability to provide adequate plant maintenance has resulted in regular power cuts.

Among the contracts detailed by Eskom are:

A five-year, R100m contract with WSP’s Parsons Brinckerhoff Africa was approved by Eskom on February 26, 2006, according to the documents. The contract is yet to be completed and is now projected to cost R6.22bn. PB Africa was bought by WSP in 2014.

Isabelle Adjahi, a spokeswoman for WSP, referred all queries to Eskom, which said the contract related to engineering and project-management work at its Medupi power station, which is years behind schedule.

“We were selected by Eskom in an open and transparent process to provide engineering, project-management and construction management support services for the Kusile power station,” Black & Veatch said in a response to queries. “The initial project award was extended and the scope significantly increased.”

The company said it only performed client-approved work and its “work and billing practices have undergone scrutiny at the client and government level.”

Alstom said it sold the relevant business to General Electric Co. in 2015. Stefanutti said the contract increased in scope and duration and the company has ended up spending more than it has been paid by Eskom. Tenova said it’s aware of the probe and audit, in which payments made by it were highlighted as being a “possible source of concern”. The company has since appointed its own legal and forensic firms to look into the contract. It maintains that the cost increases were legitimate.

ABB “self-reported to the US Securities & Exchange Commission and the Department of Justice, to various authorities in South Africa and other countries potential suspect payments and other compliance concerns in connection with some of the company’s dealings with Eskom and related persons,” the company said. “ABB made it public that the company believes that there may be an unfavourable outcome in one or more of these matters.”

Medupi and Kusile will be two of the world’s biggest coal-fired power plants when completed, producing about 4,800 megawatts each. They have both been significantly delayed and are running tens of billions of rand over budget.

Eskom also detailed R6.94bn it’s either recovered or is attempting to recover as a result of fraudulent contracts. The company has also paid R8.9bn in penalties because its plants under construction are behind schedule.