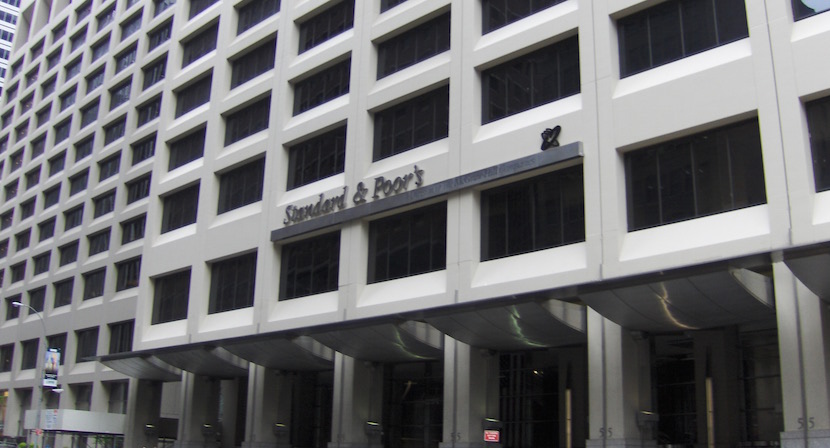 The ratings firm downgraded the country’s long-term foreign-currency rating to BB-, three notches below investment-grade, from BB. South Africa’s cost of servicing public debt will climb to about 6.5% of gross domestic product by 2023, S&P said Wednesday.

The South African Treasury said it’s “disappointed” by the downgrade. It welcomed the revision of the outlook on the rating to stable from negative as an indication that some of the state’s fiscal and monetary-policy measures have strong points.

The rand strengthened 0.2% to 18.13 per dollar as of 8:05am in Johannesburg, heading for a fifth day of gains as global risk appetite continues to recover following last month’s market turmoil. The currency is still down 23% this year, the most among major emerging currencies after Brazil’s real.

“Tough decisions have to be made and collaboration between government, business, labor and civil society remains vital in order to contain the spread of Covid-19 and ensure sustainable economic recovery,” the Treasury said in a statement.

Africa’s most industrialised economy is stuck in the longest downward cycle since at least World War II, with business confidence at the lowest in more than two decades and almost a third of the labour force unemployed. Output is also weighed down by power-supply constraints. Eskom, which generates about 95% of South Africa’s electricity, regularly implements rolling blackouts to prevent a collapse of the national grid.

“The Covid-19 health crisis will create additional and even more substantial headwinds to GDP growth,” S&P analysts led by London-based Ravi Bhatia wrote in a report.

Last month, the country lost its Moody’s Investors Service investment-grade credit rating more than 25 years after it was first awarded. That will lead to rand bonds being excluded from the FTSE World Government Bond Index. The gauge comprises 14 currencies, including the dollar, yen and euro, and is tracked by around $3trn of funds.

S&P said South Africa’s economy will probably shrink by 4.5% this year. While the government’s decision to go into a strict lockdown relatively early could limit the health impact from the virus, it’s adding to the financial hit. Even before stay-at-home orders, the central bank forecast South Africa’s economy would contract for the first calendar year since the global financial crisis a decade ago.

“The broader economic fallout will be very difficult to handle,” Bhatia said.

Statement from the Treasury

Government notes S&P’s decision to lower South Africa’s long term foreign and local currency debt ratings further into non-investment grade to ‘BB-’ and ‘BB’ respectively. The agency revised the outlook to stable from negative. According to S&P, the downgrade is a result of coronavirus (Covid-19) related pressures that will have significant adverse implications for South Africa’s already deficient growth and fiscal outcomes. The stable outlook reflects the balance between pressures related to very low GDP growth and high fiscal deficits against the country’s deep financial markets and monetary flexibility.

Government is disappointed by S&P’s decision to downgrade the sovereign rating at a time when South Africa is facing one of its most challenging times. Government welcomes, however, the revision of the outlook to stable from negative, and considers this an indication that the agency at least recognises some of government’s fiscal and monetary policy measures as strong points.

Government continues to prioritise measures announced by President Cyril Ramaphosa aimed at containing the spread of the virus and further acknowledges the negative impact Covid-19 has had on economic activity. In further responding to the Covid-19 pandemic, government has announced a fiscal package amounting to R500bn. In addition, on 23 April 2020, the President announced a gradual reopening of the economy from 1 May 2020, under strict conditions. This means that some businesses will be allowed to resume operations subject to extreme precautions to limit community transmissions and outbreaks.

Now, more than ever, structural reforms need to be urgently implemented in order to get the economy moving in the right direction. Tough decisions have to be made and collaboration between government, business, labour and civil society remains vital in order to contain the spread of Covid-19 and ensure sustainable economic recovery.