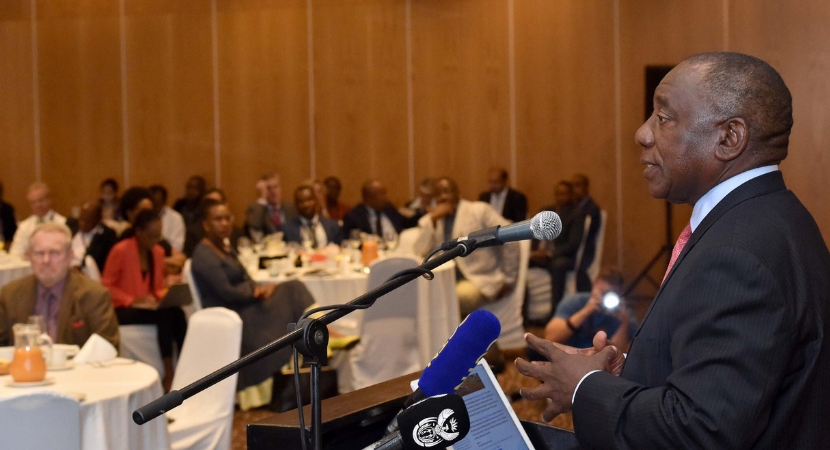 JOHANNESBURG — President Cyril Ramaphosa addressed the now-annual pre-WEF briefing that happens each year before our politicians fly over to Davos. This year’s pre-WEF meet was a very different one to the one I attended last year. For starters, the venue was different. Last year, it was held in one of the big ballrooms in the Hilton Hotel in downtown Sandton – this time it was held in a much smaller venue in the Crowne Plaza Hotel in Rosebank. I was told that Ramaphosa prefers the Crowne Plaza as it’s closer to his home in Hyde Park (I don’t know how true this is as I imagine he’s equidistance between both hotels). Nevertheless, another major difference was that this time last year we still had Malusi Gigaba as FinMin. These days, we have Tito Mboweni who slipped in late to the pre-WEF briefing in Rosebank on Wednesday and quietly sat in the back, unassuming. But lastly, the major difference that I observed was that Ramaphosa this year looked much more tired – last year he had a skip in his step amid Ramaphoria. Regardless, he’s still a good speaker and very much provides the rational perspective on things – take a listen to his speech or read through the transcript below. – Gareth van Zyl

Davos 2019: this coverage of the Global conversation on Change is brought to you by BrightRock, the first ever needs-matched life insurance that changes as your life changes.

Once again, it’s a pleasure to have all of us here. People who seem to have a passion for cold weather who have determined at all costs to go to extremely cold weather and be surrounded by snow. Once again, it is that time where we all gather in Davos and as I look around, it’s wonderful to see that we are going to have a formidable team of people who will go to Davos to represent our country and so it is good that we should gather in this way. It is that time when we do a bit of teamwork and gather together and straighten out our message, in terms of what we do when we get to Davos.

We’ve already seen what the feeling is going to be and we will be engaging with a whole number of people there, as we often do. And last year we did a truly, fantastic job. This year we’re going to Davos amidst difficult and growing challenges that we are going through. These are challenges that I think we will be able to handle as we work together. One of the things that we demonstrated very well last year was just being able — after a long period of not really connecting with each other between Government, Business, and Labour — we demonstrated that when we have the will to work together, we can. And this is the place where we indeed did so. Looking back at what Eskom was like [this time last year] we decided after the interventions that we made here that we should proceed our journey to Davos through the change of the guard at the Eskom level and that sent a very positive message.

We’re confronted by the Eskom challenge once again, but this time around we have taken steps to address the challenge that we are facing in Eskom. In terms of the process that we are involved in – we put together a task team. A task team that met with me, and the Minister Pravin Gordhan yesterday and we will continue with a number of other meetings and that task team is working feverishly to ensure that they came up with proposals and they’ve we’re working together with the board, with management, and a number of interesting ideas have been put on the table to see how best we can help to stabilise Eskom, and to determine a better path for Eskom, going forward.

So, we are here again and Eskom is still a huge challenge but this time, I think, we can say there is some glimmer of light at the end of the tunnel in terms of what we need to do with Eskom. They’re facing huge challenges, funding challenges, and now they want also to get a new tariff and there’s a huge debate that’s going on but we will be addressing all those issues. So, we can, in a way say that Eskom is being handled. We can put it on the side. We don’t need to be carrying that burden all the way to Davos with us.

One of the positive things that we also started last year, besides this type of forum, was to renew engagement between Government and Business, and that did behold us well. It was through the course of the year we were able, or even past my election as president, we were able to engage with one another on a number of things, and we have continued with that type of engagement. So, this pre-Davos type of get-together, last year it was a wonderful benefit, and I will be very interested, once I sit down and shut up, to hear what some of your thoughts are, some of the deals are so that we can do our best. Some of your views and thoughts post the Christmas period now.

Read also: Sluggish SA is economically dragging down its neighbours

The good thing is that collaboration between Government and Business is going extremely well. It is at a very rich level and as much as we have challenges, we are dealing with those various challenges. Some of those challenges are just basically how we can generate more, stronger economic growth in our economy. During the course of the year as the business community and indeed also, as Labour we were able to raise quite a number of issues – issues that we needed to address. Those issues are being addressed proceeding with addressing a lot of issues. We are stabilising a number of Government institutions, the National Prosecuting Authority (NPA) now has a new head, who will be starting shortly and we expect that we will start seeing quite a number of positive results out of the NPA.

SARS, the applications are in and we will now be evaluating those applications and the new SARS Commissioner will be chosen. We’re stabilising quite a number of other institutions. The Zondo Commission continues with its work and is helping is to get to the depth of what State Capture was all about and to make sure that we will not ever have a State Capture process in our country again. So, a number of all those issues have been a result of being able to work together. We held a very successful investment conference, which we want to repeat towards the end of the year and so, the richness of collaboration between Business and Government is what we can showcase when we get to Davos because we will be able to tell the world, the investment world that collaboration between Government, Business, and Labour and communities is going on extremely well and we are able to openly and honestly touch on a number of important issues. Some of which are of a policy nature, and others in terms of the strength of how Government should help to guide economic growth going forward.

Dealing with corruption is among the key resolves that we have and we intend to carry on with that. The governing party has just published its election manifesto. It is a document that is going to add to a number of debating issues and they will be raised even at Davos and in a number of other places. Government Ministers will be on hand to answer any questions that may arise out of that. My take is that we are going to Davos on a firm footing and all I would like to say is that our engagements in Davos, whoever we engage with, should be engagements that are based on putting a very positive message to the investing world because we do have a very positive message.

We’ve been building and stabilising the platform. The platform is not a varying platform any longer. The platform is getting stronger and I guess, what we now need to do is to start the process of putting up the building so that we can generate further growth in our economy and we should not be discouraged by the lacklustre economic growth that has been presaged by the World Bank and others. We should be very positive. We shall show determination in ensuring our economy grows. It’s there and I would like that there must be confidence to see so many of our cooperation in a very positive light about our economy, and the commitments they’ve made.

Also, the message that we’ve got is that that conference should be repeated later this year because we need to build on that momentum to put SA on the map, not only for international investors but also for ourselves that we should focus on our economy. On the Government’s side – we will continue to heed some of the calls that you’ve made, the press, some of the suggestions that you’ve put forward, we’ve looked into those and we will seek to do what is best for the Republic of South Africa and for stabilising our economy and growing the economy our country.

So, I believe that we are on a good roll. The outcomes of the Job Summit – another really, outstanding sign of collaboration between the key role players in our economy. The magnitude of their commitments and the interventions that were made is what we now need to work on and to implement. This is the positive message that we can carry out and take to the world and say, ‘as South Africans, one of the strong things that we are doing is to enable to work together, despite the challenges that we are facing.’ Post Davos I’ll be proceeding to lead a number of Government officials and ministers to India and get ready for a State visit to India and that too, I’m sure, will go well.

So, with those few words I think we are all poised to proceed to Davos in a very strong manner and if there are issues that we need to touch on and discuss now, I’ll be welcome to hear some of the thoughts and suggestions, as we did last year so, this should then afford and where are able to exchange some thoughts and views. But once again, once we get to Davos, we’ll close ranks and we’ll speak with one voice, one country, one message, and one people and that’s precisely, I guess, what we expect of one another. Last year that went very well, including the dinner that we had and now I’m looking, once more, forward to that wonderful dinner that we held. Thank you.