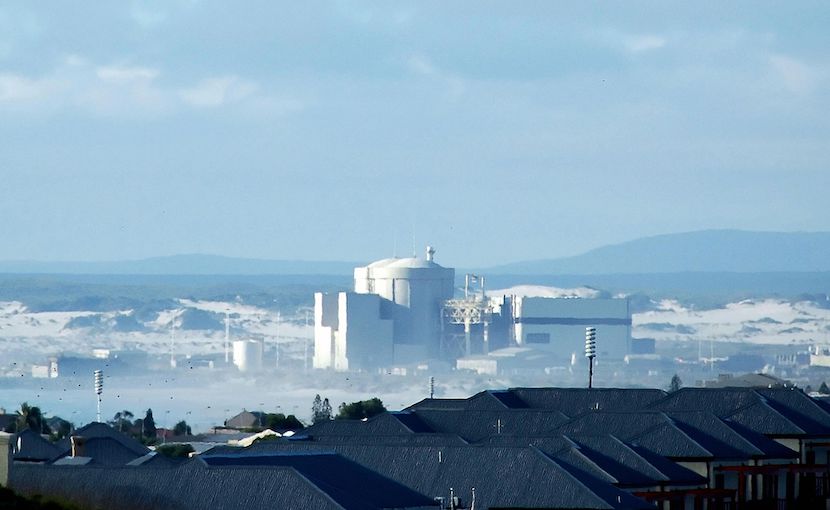 Media statement by Maria Welcome on behalf of Safcei:

While the recent seismic activity off the south-east coastline was brushed off by Eskom as no cause for alarm, NGOs are concerned about the risks associated with a nuclear plant so close to a fault line and to densely populated areas. In addition, important information about the seismic risks at the site are not being shared with the general public.

Koeberg Alert Alliance’s Peter Becker says, “If you had asked the people running Chernobyl and Fukushima if their nuclear plants were safe, the day before those disasters, they would have of course said yes. So Eskom now telling us that Koeberg is safe from earthquakes, is not reassuring. The risk to nuclear plants comes from unexpected events, such as an unexpectedly powerful earthquake.”

“In a worst case scenario, the Koeberg Evacuation plan would have to be implemented, and tens of thousands of people would need to be evacuated. Radioactive contamination can make an area uninhabitable for hundreds of years, so where would those people find housing? Or schools for their children?” adds Becker.

Becker says, “Despite a request via the Public Access to Information Act (PAIA), the National Nuclear Regulator (NNR) has refused to provide access to a study submitted to them in 2017, which assessed the seismic risk at the Koeberg site. If this study was reassuring, why has the regulator and Eskom chosen to keep it secret?”

The Information Regulator was established in terms of the Protection of Personal Information Act 4 of 2013 (POPIA), but seven years later it is still not fully operational. This has led to a vacuum in terms of ensuring public bodies fulfil their obligations to respond reasonably to PAIA requests, and hence the only mechanism civil society organisations have to challenge PAIA refusals is a court action with a cost of hundreds of thousands of rands.

Another concern, which adds to this worrying culture of secrecy is that in an unprecedented step, no observers will be permitted at the Koeberg emergency readiness exercise in October 2020. This is done every two years to test the effectiveness of the emergency plan. The Koeberg Alert Alliance has requested to be part of the process, but has been refused permission by the NNR, which cited Covid-19 concerns as the reason.

“You would presume there are protocols in place to protect the thousands of people being evacuated during a pandemic, so it makes absolutely no sense that a handful of observers could not be protected. We also suggested they live-stream the inspection, but that too was refused By Eskom without any reason provided,” he says.

Executive Director of the Southern African Faith Communities’ Environment Institute (Safcei) Francesca de Gasparis says that the government’s seeming refusal to grant access to information – a legal South African right, granted through its PAIA system – is cause for alarm. “What we are seeing is a lack of transparency by government in how it makes decisions around Koeberg,” says de Gasparis.

“This is, in fact, a worrying trend in the energy sector that we hoped had ended with state capture. In the past, some decisions were shown to be made in secret and not to the benefit of the citizenry. Even though South Africa has one of the strongest Constitutions in the world, we have had to learn the hard way how important it is for governments to be held accountable, especially in light of how entrenched corruption becomes when left unchecked. In 2017, for example, we had to take the government to court over its corrupt and secret nuclear deal, which was found – by the Western Cape High Court – to be illegal and unconstitutional,” she says.

“We are still waiting for a response to several PAIA applications about Koeberg and hope that there will be greater transparency this time when we request information that is within our rights.” concludes de Gasparis.

Makoma Lekalakala, Director of Earthlife says, “At a time when the world is transitioning to low-carbon electricity generation, nuclear cannot be used as a transition energy. South Africa needs to walk its talk on its intentions, as stipulated in the Nationally Determined Contributions to the Paris Agreement. The nuclear fuel chain is too carbon-intensive and the external costs, of which there are many, are too often not included in these calculations.”

An example of these costs is the estimated 200 million rand ($13.60 million) Eskom paid for an initial batch of seven reinforced dry storage casks from U.S. energy company Holtec International to help keep Koeberg running beyond 2018, as reported in local media in November 2019.

Becker adds, “These earthquakes have brought renewed attention to the risks of Koeberg. The longer the plant is kept operational, the greater the chance of earthquake damage, and so the plans Eskom has to keep the plant operating twenty years beyond its designed life, are questionable. Keeping these plans secret is simply unacceptable.”

“Koeberg was the first nuclear plant built on a concrete raft supported by neoprene rubber pads, in an attempt to protect against earthquakes up to a certain magnitude. No horizontal buffering was included in the foundations at Koeberg, although it was ‘strongly recommended’ for subsequent plants. In addition, these pads are now forty-four (44) years old, and if the twenty (20) year extension were to go ahead, they would be sixty-eight (68) years old by 2044. Will the neoprene pads continue to be reliable after so long in a marine environment? What if Cape Town experiences an unexpectedly powerful earthquake? These are important questions which should be debated transparently, with sufficient reliable evidence under public scrutiny.”

Electrical Engineer, Hilton Trollip – who heads-up the South Africa leg of the Advancing Deep Decarbonization Pathways in Emerging Economies initiative, which has South Africa, Brazil, China, India, and Indonesia committed to meeting the long-term temperature goal of the Paris Agreement – weighed in on the issue. “We absolutely do not need Koeberg to avoid load shedding. There are documented and proven sustainable electric systems that can run very well without nuclear and even without coal. We need to begin phasing out obsolete, pollution-intense power stations that have reached the end of their design lives and accelerate the building of renewable energy systems to replace them.”

“The refurbishment costs of Koeberg have not been made public in a way that allows a proper assessment of whether this major decision is a cost-effective alternative to replacing Koeberg with renewable energy and storage. Public consultations regarding this do not have access to the necessary facts. Statements that ‘keeping Koeberg is necessary for baseload power’ have no basis in fact but have featured in ministerial justifications for nuclear. South Africa cannot afford the consequences of these kinds of insider-influenced opaque processes on large, long-term investments,” adds Trollip.

“Eskom is once again going ahead with committing tens of billions of rand, piece by piece, essentially taking a crucial decision by stealth, instead of subjecting it to the rigours of public scrutiny. Combined with secrecy around the safety issues, this is more than a worrying continuation of the contempt shown by Eskom for transparency and accountability, as seen during the height if the State Capture period. These acts are a risk to the entire economy and a danger to the population of Cape Town,” concludes Trollip.