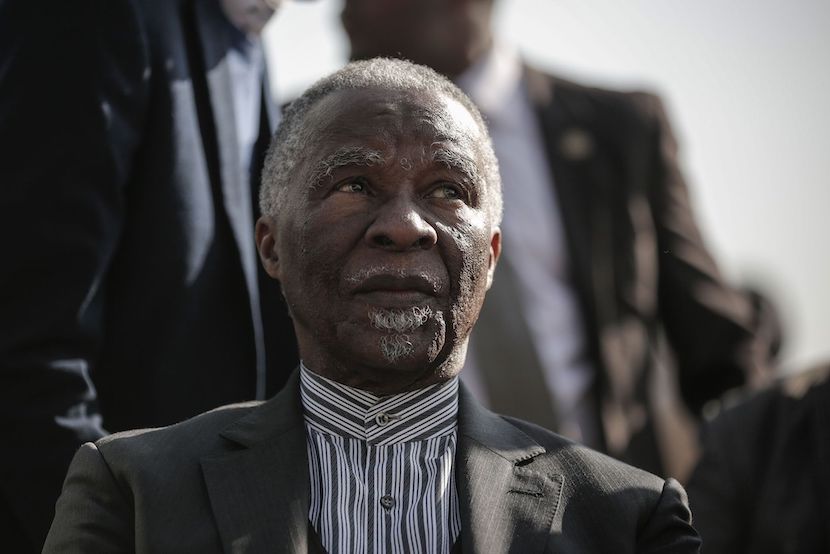 (Bloomberg) — South African President Cyril Ramaphosa must provide details for how his plan to reboot an economy battered by the coronavirus through increased spending on infrastructure would be financed, former President Thabo Mbeki said.

Ramaphosa’s economic plan, anchored around boosting spending on projects and investing in new energy generation projects, doesn’t provide details on how its going to be financed, Mbeki said in an article published in the Sunday Times.

The program launched last month risks being a “mere vision until resources are made available to enable their implementation,” according to Mbeki, under whose nine years in office the South African economy had its longest period of expansion since the end of World War II.

Ramaphosa’s proposal on jobs creation “has very little substance,” said Mbeki, who succeeded Nelson Mandela in 1999. Ramaphosa’s economic plan was drawn up with business and labor groups and includes the government spending 100 billion rand ($6 billion) on new infrastructure over a decade — an undertaking the president expects to attract a further 1 trillion rand of private investment within four years.

Mbeki, a fellow member of the African National Congress, said Ramaphosa’s statements on funding for the projects are “worrying” and implored the government to publish a financing plan that’s “realistic and credible.”

The document should indicate how much capital would come from the public sector and the private sector, he said.

“This is important because the country suffers from serious fiscal constraints,” Mbeki said. “The cost of borrowing would be quite high given the sovereign rating downgrades and serious uncertainties about the future.”

Africa’s most-industrialized economy was already in the doldrums before the coronavirus struck and ground to a near halt after a lockdown was imposed in late March to curb its spread. Political strife during the past decade worsened investors’ risk aversion to South Africa, Mbeki said.

“There has been a sustained and continuing process of the export of capital,” Mbeki said. “This has not been for the mere purpose of diversifying portfolios but a step toward the relocation of the businesses and business people concerned.”