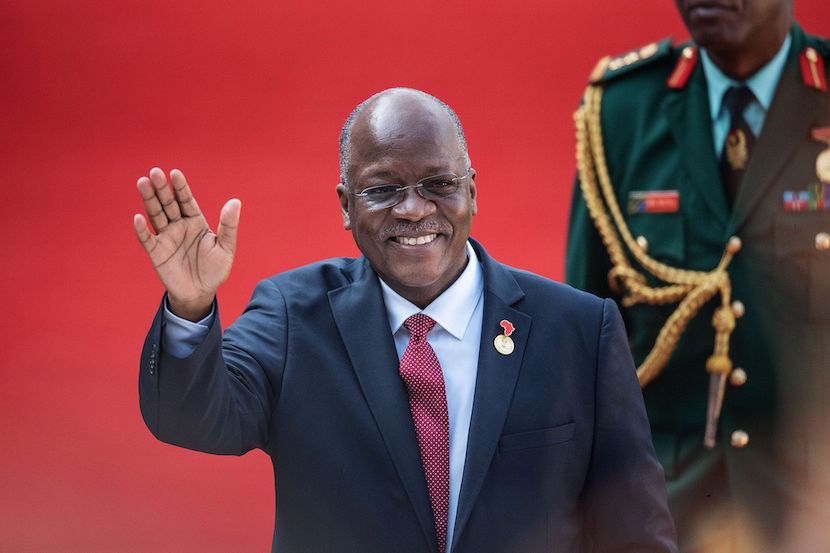 (Bloomberg) – Tanzanian President John Magufuli, who drew widespread criticism for his denialism of the coronavirus pandemic, has died only five months after he won a second term in a disputed election. He was 61.

“We have lost our courageous leader, President John Magufuli, who has died from a heart illness,” Vice President Samia Suluhu Hassan said on state television on Wednesday. Magufuli fell ill on March 14 and had been receiving treatment at a hospital in Dar es Salaam, the commercial capital, she said.

Prior to his death, Magufuli hadn’t been seen in public since Feb. 24, sparking speculation on social media that he was critically ill. Opposition leader Tundu Lissu said on Twitter last week that the president had Covid-19, drawing a rebuke from Prime Minister Kassim Majaliwa, who urged citizens to ignore “baseless social media rumors.”

Nicknamed ‘The Bulldozer’ for his aggressive leadership style, Magufuli won early praise for tackling corruption, reducing wasteful government spending and improving the lives of poor farmers by waiving dozens of taxes. He also spearheaded the development of new transport links, power plants and more than 1,700 health centers, investments that helped Tanzania’s economy become one of the world’s top performers.

Magufuli also drove through controversial reforms aimed at ensuring the nation derived greater benefit from its natural resources, which put his administration on a collision course with foreign mining companies. In 2017, the authorities asked Barrick Gold Corp.’s local unit to pay a whopping $190 billion tax bill – a dispute the company settled by paying $300 million and creating a mining joint venture with the state.

Magufuli became increasingly authoritarian as his first term progressed — he centralized power in the presidency and unapologetically cracked down on dissent and media freedom. He secured a second five-year term in October when he garnered 84% of the vote, the widest victory margin of any presidential candidate in almost three decades of multiparty elections in Tanzania.

The opposition rejected the outcome as rigged and the U.S. Embassy in Tanzania said credible allegations of fraud and intimidation, as well as the ruling party’s overwhelming win, raised questions about the election’s fairness. Several opposition candidates were disqualified from standing and the government instituted internet and social media site shutdowns that hampered its opponents’ campaigns.

Opposition leader Zitto Kabwe offered his condolences to Magufuli’s family and to Hassan, who is set to become the first woman president in the six-nation East African Community.

Born on Oct. 29, 1959, in the northwestern town of Chato, Magufuli worked as a teacher and industrial chemist before venturing into politics. He won election to parliament in 1995 and held several cabinet posts before the ruling Chama Cha Mapinduzi party chose him as its candidate to succeed President Jakaya Kikwete in 2015.

International consternation with Magufuli’s rule focused on his unorthodox approach to tackling Covid-19. He insisted the country was free of the disease, discouraged the use of face masks and advised his people to pray and undergo steam therapy to safeguard their health. While most of the rest of the world clamored to access vaccines, his administration eschewed them and said it was working on developing alternative natural remedies.