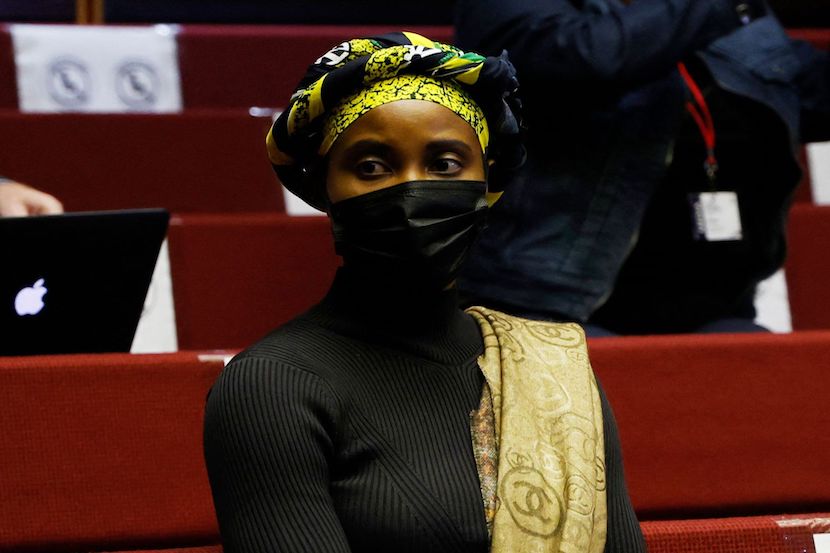 (Bloomberg) – One of former South African President Jacob Zuma’s daughters has come under scrutiny for allegedly inciting violent protests that have claimed at least 72 lives and seen rampant looting and business closures.

As many as 12 people are on the authorities’ radar for stoking the riots, Police Minister Bheki Cele told reporters on Tuesday, when asked if Duduzile Zuma-Sambundla was being investigated. An unverified Twitter account under her name encouraged people to protest against her 79-year-old father’s incarceration on contempt-of-court charges last week. She hasn’t distanced herself from the posts. Attempts by Bloomberg News to reach Zuma-Sambundla for comment were unsuccessful.

The ruling African National Congress distanced itself from the comments attributed to Zuma-Sambundla saying, that she will be called to explain her tweets as a member of the party. The main opposition, the Democratic Alliance, said it plans to file a police complaint against her.

It’s time for Duduzile Zuma-Sambudla and many others who have incited violence to be held accountable for the looting and violence we have witnessed over the last few days.

DA Leader @jsteenhuisen confirms that we will now be laying criminal charges – no one is above the law! pic.twitter.com/UV7yKUSSZU

Any investigation into Zuma’s daughter would be malicious, according to Mzwanele Manyi, spokesman for the Jacob Zuma Foundation.

“They must not even try that, it is absolute nonsense. People are on the streets, most of them are not on Twitter. They don’t even know what is Twitter,” Manyi said. “There is absolutely no connection whatsoever between what she is tweeting and what is happening. To try and link it to her is another persecution of the Zuma family, pure persecution.”

The country’s socio-economic challenges are the main causes of the riots and must be addressed, according to Duduzane Zuma, Zuma-Sambundla’s twin brother. In a video shared by an associate on Instagram, he denied having made any comments aimed at inciting violence. The riots were more than a “flash in a pan,” but were the manifestation of discontent that had been building up in the country for some time, he said.

[WATCH] Duduzane Zuma says he does not have any accounts on social media platforms whether it be Facebook, Twitter or Instagram: I have not made any inflammatory, any divisive and any inciting statements.@City_Press pic.twitter.com/eC71ZB4H3q